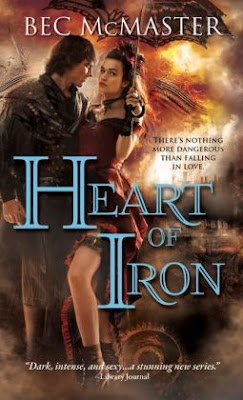 Coverart: Click on the image for a larger, clearer view of the covers in this series. 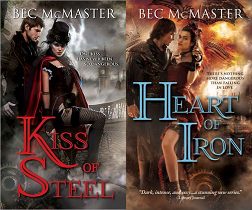 Excerpt from Heart of Iron, courtesy of Amazon.

In the mist-shrouded streets of London's dreaded Whitechapel district, werewolves, vampires, and a clockwork army are one step away from battle...No One to TrustDangerous. Unpredictable. That's how people know the hulking Will Carver. And those who don't like pretty words just call him The Beat. No matter how hard Will works to suppress his werewulfen side, certain things drive him beyond all control. And saucy Miss Lena Todd tops the list. Lena makes the perfect spy against the ruling Echelon blue bloods. No one suspects that under the appearance of flirtatious debutante lies a heart of iron. Not even the ruthless Will Carver, the one man she can't wrap around her finger and the one man whose kiss she can never forget. He's supposed to be protecting her, but he might just be her biggest threat yet...

If you are a steampunk fan, you have to read Bec McMaster! Her London Steampunk series continues with her latest book, Heart of Iron. It's not just steampunk, which takes readers back to an earlier time, complex yet intriguing. McMaster's adds paranormal elements which gives her series an otherworldly feel. McMaster is a break out author who has a great new series to her credit. Her descriptive powers are flawless and her ability to draw the reader in is unparalleled.

This is a book and series that I can't say enough good things about. First things first. I think writing steampunk well, is a difficult task. A lot of writers are trying it these days. It seems to have become a fad, much like Twilight and vampire stories took over the writing world for a time. Steampunk has blossomed into a sub-genre that used to be hard to find, but now it's everywhere. The trick is, some of the ones I've read, have not been that great. They seem to be missing that special something. They may have lost it somewhere, but Bec McMaster certainly found it. She blends the steampunk era atmosphere with the paranormal like a pro. Her stories may not be realistic, but they definitely draw the reader in.

McMaster has a knack for grabbing the readers interest, with both cool locations and settings and one of a kind characters. London is indeed a magical and wonderful city, but the London McMaster's writes about is eerie and filled with danger. McMaster makes London exciting and a bit dark, which really appeals to those of us who like paranormal writing. It's the perfect setting for vampires, werewolves and other boogie men. I love the way this author making the setting so important it almost takes on the aspects of a character in the story.

I love McMaster's characters in this book as well. I always like a good brooding hero and this book certainly has that. I love the way he seems to think he doesn't deserve love and in the end he can't do without it. I like that the heroine was strong enough to handle him, but yet gentle in the way she loved him. The mix of paranormal, romance and steampunk is exceptional. But I think it's really the characters that advance this story so wonderfully. They may be vamps and weres but they still have hearts and McMaster seems to really get that.

Bec McMaster is a writer I would recommend to anyone who wants to read good steampunk, good paranormal romance or just altogether good writing.

Heart of Iron is available NOW from your favorite bookseller. 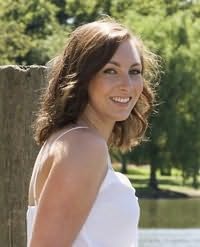 Award winning author Bec McMaster lives in a small town in Victoria, Australia, and grew up with her nose in a book. Following a lifelong love affair with fantasy, she discovered romance and hasn't looked back. A member of RWA, she writes sexy, dark paranormals and adventurous steampunk romances. When not writing, reading, or poring over travel brochures, she loves spending time with her very own hero or daydreaming about new worlds.
Her first novel, Kiss of Steel, is a steampunk romance from Sourcebooks and debuts September, 2012. Heart of Iron is due for release May 2013.

I like how you shared your love of Steampunk in this post! I also am a sucker for Steampunk and enjoyed Bec's first book, though not as much as you :)