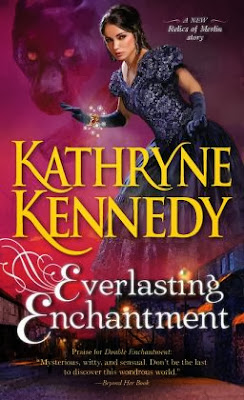 Excerpt from Everlasting Enchantment, courtesy of Amazon's Look Inside feature.

From the enchanting world of Kathryne Kennedy comes the long-awaited new installment in her bestselling Relics of Merlin series—where the magic never dies.
Power Magic is Afoot
Millicent Pantere has lived her entire life in the notorious London Underground. She cares nothing for the problems of the crown or the intrigues of society. But the ladies of the realm are acting strangely, and Millicent is coerced into tracking down the rumors of a mysterious man—a magic man who comes in the night and disappears at dawn.
And So the Hunt Begins
Millicent's search leads her to one of Merlin's legendary relics and the seductive knight whose fate is bound up with it. Centuries ago, Sir Gareth Solimere made the mistake of seducing the wrong woman, and he has been trapped ever since by a diabolical curse. He's looking for the one who can break the enchantment—but in this world, there is no love without betrayal...

Kathryne Kennedy's latest book in the Relics of Merlin series, Everlasting Enchantment has been a long time coming and fans of this eclectic series are ready to see where Kennedy will take them. Kennedy's world building skills are among the best in this cross between fantasy and paranormal romance. It is definitely a genre-bender as it is set during the reign of young Queen Victoria and uses the London underground as a backdrop for the action and adventure that makes up this novel. Kennedy fans will relish her knack for time and setting as much as her ability to create meaningful love scenes and tender moments. A great addition to a good fantasy series.

I liked the fact that Kennedy doesn't give us a straight up paranormal romance or a high fantasy title, which she is known for. She gives readers a very unique mix between the two in Everlasting Enchantment. You have paranormal characters like the heroine who a panther shifter, you also have historical figures like Queen Victoria and the magical realm that is very reminiscent of high fantasy. It is truly a genre-bender and will appeal to readers of many different types. I thought Kennedy did a great job of bringing all the elements together to bring readers a very adventurous love story.

I liked Millicent a lot. She was a heroine that has had a hard go of it. She is orphaned and used to relying on only herself and her abilities to get her though anything. She isn't very trusting and she doesn't believe in doing anything that doesn't lend itself toward her own preservation. Kennedy shows a lot of skill at character development as she begins to break down Millicent's walls and allows her become vulnerable and ready for love.

Gareth is kind of a confusing character for me. He has been imprisoned in a relic by Merlin for seducing his lover, but yet he comes off with such a chivalrous and kind character. A knight of the round table, we know he is gallant and serves others before himself. But as seen in times past, the knights are still human and Gareth is certainly not oblivious to the fact that he must seduce the right woman in order to break the curse. I liked the fact that Kennedy shows Gareth's growth as well. At first all he cares about is getting Millicent to sleep with him in order to break the curse but in the end he begins to think more about her than about freeing himself.

These two make a great team and a great couple. Their relationship is not without it's problems but it develops in just the right way. They become friends before anything else. Each of them must make some hard decisions that affect each other and the way Kennedy resolves thing is very enjoyable and surprising. That curse is a little more devious than meets the eye.


The magical elements of this story were a joy to read. Millicent's abilities as a were-panther were innovative and creative. I liked the fact that the magical aspects of the story leaned a bit toward Kennedy's roots in high fantasy. She has long been one of my favorites in that area. There were just so many elements that showed Kennedy vast imagination. She has created a very unique world and readers are sure to fall in love with it.

The bad guy was a ruthless duke who coerces Millicent to steal the relic and he holds her friend as ransom. As bad guys goes he was a little predictable but that doesn't take away from the overall enjoyment of the story. He was just one of those people that you know is a bad, but he doesn't steal the show. He sort of lingers in the background a bit and other elements overshadow him.

This was a very good long awaited book. It had so many different elements in it, that it will appeal to a wide range of readers. I miss Kennedy's fantasy edge a little bit, but it does surface enough in this one to make me want to read any succeeding books in the series. The time of Arthur and his knights, of Merlin and real magic, is quite well represented and I think there is a lot to like about this one.

Everlasting Enchantment is available NOW from your favorite bookseller.

I'm giving this one 4 out of 4 apples from my book bag! 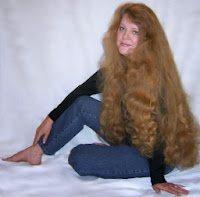 Kathryne Kennedy is a critically acclaimed, bestselling, award-winning author of magical romances. She welcomes readers to visit her website where she has ongoing contests at www.kathrynekennedy.com. She's lived in Guam, Okinawa, and several states in the U.S., and currently lives with her wonderful family in Glendale, Arizona.

Check out Kathryne Kennedy's interview with Reading Between The Wines for your chance to win a copy of Everlasting Enchantment, you only have a day or so left so get on over there.
Posted by justpeachy36 at 10:00 AM