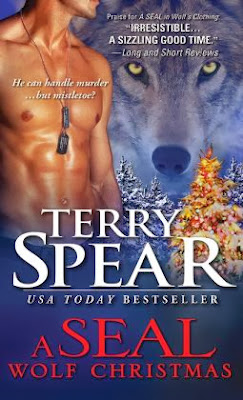 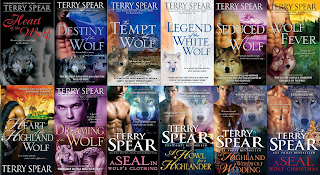 Excerpt from A SEAL Wolf Christmas, courtesy of Amazon's Look Inside feature.


Can an Alpha Wolf Who's Met His Match...
Navy SEAL Bjornolf Jorgenson has had tough missions before, but going undercover with feisty gray wolf Anna Johnson could top the list. She drives him crazy—in more ways than one. Now he has to investigate a murder, supervise a wild teenage wolf—and handle Christmas with Anna.
Survive the Holidays with Her?
For Anna, the only thing worse than staging the perfect family Christmas is having to do it with Bjornolf posing as her husband. Anna is a serious undercover operative who isn't afraid of a fight, even with a hunky SEAL shifter. With a killer on the loose, Anna just wants to focus on their mission, but the one thing she can't fight is her sizzling chemistry with Bjornolf.

Terry Spear once again returns readers to the world of her Heart of the Wolf series with a Christmas treat, A SEAL Wolf Christmas. Spear's attention to detail and her remarkable research into pack dynamics and behaviors has made this a must read series for fans of paranormal romance. Her latest offering has mystery and danger, as well as, a good dose of the Christmas spirit. Spear's talent for writing compelling characters, with unrealistic abilities is exceptional. This author writes about the impossible and makes you believe every word!

The Heart of the Wolf series was one of the very first paranormal stories I read, when I decided to give the genre a go. I wasn't sure if I'd like it, if I would find it over-the-top or just too far fetched. I am so very glad that I chose this series to start with, because I think it made all the difference. Had I started with a series that was not as well written or researched, I may have given up on it all together and I very happy I did not.

This series is written with such a great amount of authenticity. Terry Spear has done extensive research and it comes through on every page. Her shapeshifting werewolves act like real wolves, they are territorial and acquiesce to the alpha, they react like real wolves and they effect is mesmerizing. Readers who are looking for a werewolf series that has balance and sizzle, need look no further, the Heart of the Wolf series has it all. A SEAL Wolf Christmas may be the twelfth book in the series, but it doesn't look like Spear will be done telling her stories about this big extended wolf family any time soon!

The hero in A SEAL Wolf Christmas is Bjornolf Jorgenson, has all of the qualities that women look for a in a good hero. He is strong and courageous. His job as a Navy SEAL is one of the most difficult jobs imaginable. He is sexy and sweet and the kind of man any of us would love to read about. Spear does an excellent job of showing Bjornolf as a man, with wants and dreams like anyone else, but also as a soldier, who believes in loyalty and justice. He certainly ranks right up there with one of my favorites in the series, Leidolf Wildhaven. They are very different characters but still have underlying aura of command and safety about them.

Anna Johnson, the heroine was slightly harder for me to connect with. She is one tough customer. An undercover operative, dangerous, yet vulnerable. I liked the fact that Spear lets Anna explore that vulnerability with Bjornolf, without taking away from her rough exterior and attitude. After I got used to her manner and way she held herself in the book, I really started to like her. She stands up for what she believes and expects others to, as well. That's a very attractive quality. But let me tell ya, it takes a strong man! Bjornolf was certainly up to the task and the romance between them was both beautiful and hot.

The love scenes sizzle in this one to be sure. Spear may know a thing or two about writing about wolves, but she also knows how to create an atmosphere. Not only is Christmastime the setting for the story, but it also creates a lot of tender moments. It has a hand in the mystery, because of a connection to a Christmas tree farm and the times spent with friends and family with lots of Christmas cheer are heartfelt and fun to read. Christmas just permeates the book, which in my humble opinion, makes the story even better. I can certainly get into the idea of a few stolen moments by the light of the Christmas tree! Oh my!

Bottom Line: Don't miss this great addition to a fantastic series. Add some Christmas cheer to your own life with this wonderful Christmas novel!

A SEAL Wolf Christmas is available NOW from your favorite bookseller. 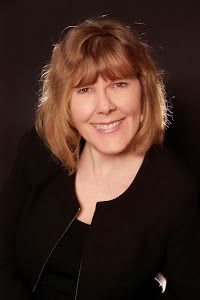 USA Today bestselling author Terry Spear has written over two dozen paranormal romance novels and medieval Highland historical romances. In 2008 Heart of the Wolf was named a Publishers Weekly Best Book of the Year. A retired officer of the U.S. Army Reserves, Terry also creates award-winning teddy bears that have found homes all over the world. She lives in Crawford, Texas.
Posted by justpeachy36 at 10:00 AM