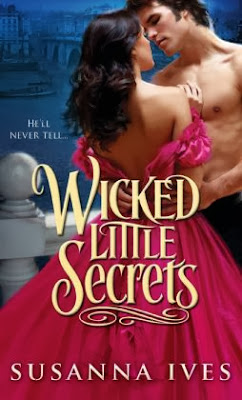 It's Not Easy Being Good...
Vivacious Vivienne Taylor has finally won her family's approval by getting engaged to the wealthy and upright John Vandergrift. But when threatened by a vicious blackmail scheme, it is to her childhood friend that Vivienne turns; the deliciously wicked Viscount Dashiell.
When Being Wicked is so Much More Exciting...
Lord Dashiell promised himself long ago that his friendship with Vivienne would be the one relationship with a woman that he wouldn't ruin. He agrees to help her just to keep the little hothead safe, but soon finds that Vivienne has grown up to be very, very dangerous to all of Dash's best intentions.

Author Susanna Ives brings readers a rollicking Victorian romance, with a dash of mystery in her latest book, Wicked Little Secrets. Ives has a knack for humor and her characters are well drawn and easy to relate too. Blackmail is the order of the day in this novel and Ives sets the scene with attention to the smallest of details. Historical romance fans will find more than just romance in this book, as the mystery is both entertaining and engaging. Ives has a writing voice that was made for the genre and Wicked Little Secrets will likely be an instant hit.

This was actually a very well written historical romance. Some of the themes were a little predictable. Dashing rake next door falls in love with damsel in distress. But the addition of the blackmail plot sets this one apart. The book is still most definitely a romance, but the air of mystery is a plot device that really works here. Ives does a wonderful job of incorporating blackmail into every aspect of the book. Since this is what brings the hero and heroine together, it takes on the characteristics of an actual character. Well done!

The humor is exceptional in this book. Ives knows how to use humor without overwhelming the story with it. Her humor is subtle, but hilarious. When those moments of comic relief are needed, Ives steps up. She is able to put her characters into humorous situations without seeming over the top or unrealistic. Lord Dashiell's grandfather is among the most comical in the book and gets himself into quite a few messes. I found myself smiling a lot, giggling on occasion and laughing out loud more than once.

The main characters were very well written as well. Vivienne Taylor was a lot of fun to read about. She was a bit wild and undisciplined. Used to being trodden down by her family, never in the right place at the right time... until now. She has finally gotten a marriage proposal from a businessman that will keep her family from financial ruin. But she isn't in love with him. I thought Ives did a great job of showing Vivienne's insecurities. Her need for her families approval, her disregard for her own safety, and even her feelings of unworthiness. She was a great heroine.

Lord Dashiell was a consummate rake. Money, bad reputation, the devil may care attitude. He certainly wasn't the kind of man that Vivienne's parents wanted for their daughter or their situation. What I liked most about him was his total acceptance of Vivienne. She didn't have to change one thing for him to care about her, in fact he didn't want her to change a thing. He thought she was perfect. I also enjoyed his relationship with is grandfather and his no nonsense ways. He didn't care a whit about what anyone else thought. That was refreshing in this type of character.

I also really enjoyed the side romance between Hadrian's grandfather and Vivienne's aunt. It was comical and fun and added another dimension to this already lovable book. The secondary characters were all so well written. Each with their own backstory and reason for being in the novel. They are people that readers will want to know more about and who strike a cord with them. I thought Ives was very conscientious about making each character give something to the plot that only they could have provided.

Not too much really. I did have to shake my head at Vivienne's heedlessness. She kind of went at things in a more haphazard way than I would have liked. She had a disregard for how her actions were affecting the other people in her life. Also Lord Dashiell was way to hesitant to suit my tastes. Readers obviously could tell that he and Vivienne were made for each other, but it sure took him a lot of time to figure that out on his own. But neither of these points is a deal breaker. This is still an exceptional historical romance.

I loved this one. The humor was on point. The characters were engaging. The blackmail plot added a mysteriousness to the book and overall it was just a very good read. I liked the fact that it was set in the less popular Victorian era as well. This one has a lot going for it.

Wicked Little Secrets is available NOW from your favorite bookseller. 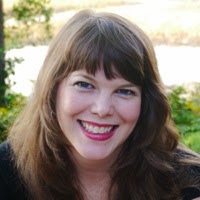 Susanna Ives started writing when she left her job as a multimedia training developer to stay home with her family. Now she keeps busy driving her children to various classes, writing books, and maintaining websites. She often follows her husband on business trips around Europe and blogs about the misadventures of touring with children. She lives in Atlanta.
Posted by justpeachy36 at 11:00 AM

I was blackmailed, sort of, as a child that if I told my mother something I would be blamed for it. I suppose that happened to just about everyone.
suefarrell.farrell@gmail.com

I told my 19 year old nephew that if he unfriended me on Facebook then I would leave him out of my will.