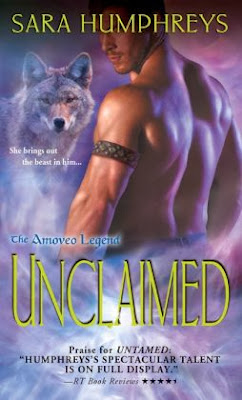 Excerpt from Unclaimed, courtesy of Amazon's Look Inside feature.

She Works Hard to be Normal...
Tatiana Winters loves the freedom of her life as a veterinarian in Oregon. It's only reluctantly that she agrees to help cure a mysterious illness among the horses on a Montana ranch—the ranch of the Amoveo Prince. Tatiana is no ordinary vet—she's a hybrid from the Timber Wolf Clan, but she wants nothing to do with the world of the Amoveo shifters.
But There's No Escaping Destiny
Dominic Trejada serves as a Guardian, one of the elite protectors of the Prince's Montana ranch. As a dedicated Amoveo warrior, he is desperate to find his mate, and time is running out. He knows Tatiana is the one—but if he can't convince her, he may not be able to protect her from the evil that's rapidly closing in...

Sara Humphreys brings readers the fifth book in the Amoveo Legend series, Unclaimed. This is a highly acclaimed paranormal romance series that fans flock to and the release of Unclaimed has been no different. Humphreys has a created a very unique shifter world that doesn't just include the occasional werewolf. She uses shifters of all different kinds and even uses shifter-human hybrids. Readers will love the diverse and original story line in this book and the ongoing development of the characters. Unclaimed features a veterinarian hybrid from the timber wolf clan and is sure to draw in paranormal readers of all kinds.

Sara Humphreys knows how to write paranormal romance there is no doubt of that. But what I think she does even better is to write about shifter dynamics. I love the fact that she has several different Amoveo clans that feature everything from bears to falcons. It makes for a really diverse world with so many possibilities. Animal shifters are definitely my favorite paranormal characters and Humphreys really has a way with them. I liked the fact that she uses a hybrid as her heroine for this one. And one that has no intention of following the Amoveo ways.

I liked Tatiana a lot. She is a woman after my own heart, an animal empath and a veterinarian. The addition of the horses into the conflict in this one was a very original idea and I thought it provided just the right back drop for Tatiana and Dominic's story. I could understand why Tatiana did not want to be a part of the Amoveo world because of her past experience but once she meets Dominic who is her true mate, she begins to see that maybe the Amoveo are not as bad as she thought. I liked her growth throughout the story and the fact that she stuck to guns and persevered until she figured out what was wrong with the horses and who was causing it.

Dominic made a great hero. The Amoveo first meet their mates in the dream realm and Tatiana had been avoiding him like the plague, but he doesn't give up, especially after he meets her in person. I liked the fact that he was close to the end of his rope in one sense. As a guardian he is challenged with protecting the ranch and he is about to lose his abilities because he doesn't have his one true mate. I loved the fact that the Amoveo only have one mate that they must find in their life, that was interesting.

I have read the other books in this series and loved them all. This one was no different. Unclaimed features the coming war between the Purists, the Cadeo and the regular Amoveo. Things are starting to get more and more heated between the groups and it is certain to end badly. I liked that Humphreys is continuing to build the tension between the groups until there will be no other recourse but war. It's getting down to the nitty gritty and more interesting by the minute.

I really enjoyed the heat and sensuality between Dominic and Tatiana. The sexual tension was palpable and totally got my interest. Readers of paranormal romance will love this book for all of it's interesting paranormal elements but romance fans will love the passion and the love scenes which Humphreys excels at. Readers may need a fan and a cold drink for this one.

The cliffhanger in this one was pretty enormous and I hate to have to wait to see what's going to happen. Several of the secondary characters are involved and it's hard to imagine that it will be a long time before we know what happens to them. It's a good thing and a bad thing all rolled into one. It makes me practically salivate for the next book to come out, but it's hard to wait.

If you haven't tried this series and paranormal romance is your thing, what in the world are you waiting for. It's just that good! The main characters in Unclaimed are sensual and strong willed but underneath all that they are loyal and committed to each other and the Amoveo in the end. It's a great addition to the series and I can't say enough good things about it.

Unclaimed is available NOW from your favorite bookseller.

I'm giving this one a resounding 5 out of 5 apples from my book bag! 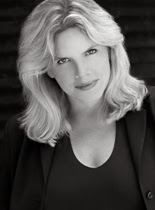 Sara Humphreys has been attracted to the fantasies of science fiction, paranormal, and romance since her adolescence when she had a mad crush on Captain Kirk. An actress and public speaker, Sara lives in Bronxville, New York with her husband, who is very considerate of her double life, and four amazing boys.

Check out Joyfully Reviewed for your chance to win a copy of Unclaimed by Sara Humphreys. Not sure when this one ends but it shouldn't be over yet.
Posted by justpeachy36 at 10:00 AM