Review: Legend of the Highland Dragon 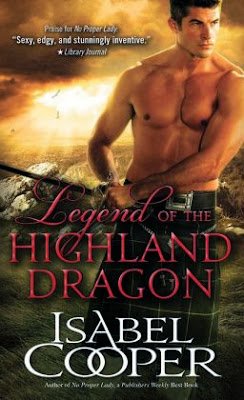 Excerpt from Legend of the Highland Dragon, courtesy of Amazon's Look Inside feature.

He Guards a Ferocious Secret
In Victorian England, gossip is often as precious as gold. But the Highlanders are a more mysterious bunch. And if anyone found out that Stephen MacAlasdair really was, he'd be hunted down, murdered, his clan wiped out. As he's called to London on business, he'll have to be extra vigilant—especially between sunset and the appearance of the first evening star.
Mina just wanted to find out more about the arrogant man who showed up in her employer's office. Some might say it was part of her job. She never thought the stranger would turn into a dragon right in front of her. Or that he'd then offer her an outrageous sum of money to serve as his personal secretary. Working together night and day to track a dangerous enemy, Mina comes to see a man in love is more powerful and determined than any dragon.

Isabel Cooper brings readers the first book in a new series, called the Highland Dragons. The Legend of the Highland Dragon is part historical romance and part paranormal romance. It will easily entertain readers of both genres. Cooper does a fantastic job of showing the mind of a dragon and it's base instincts. She also describes a magical underground that will captivate readers. Cooper also gives readers strong characters with intriguing personalities and a bit of a mystery. A great first effort.

Being a paranormal fan I liked the fact that Cooper chose to write her own take on a dragon shapeshifter. I thought the background given was a bit sketchy and needed more depth, but Stephen MacAlasdair made a fantastic dragon. When Cooper gets down to brass tacks and lets the reader see MacAlasdair as a dragon, how he thinks, how he problem solves and how he gets what he wants, her writing shines. I thought she did an excellent job with the paranormal aspects of this book creating a fascinating culture that I personally want to read more about.

I enjoyed Stephen very much. He was certainly an alpha male but he was not overbearing with it. He didn't command or show an aggressiveness that some alpha's do. Which was really unexpected considering he is a dragon shifter. He shows great concern for his family and for Mina. He doesn't plan on her finding out his secret, but when she does, he rolls with it and doesn't expect to fall in love with her.

Mina was a great character. She comes from a lower class background and has established herself as a secretary for a well renowned scholar. She most definitely is not a pushover. She earned her way up in the world and she isn't inclined to let anyone take her down a peg, not even a dragon. She stands her ground and knows what she wants. She is inquisitive and gutsy. A great leading lady. Cooper shows a lot of depth in character development with Mina and readers will be drawn to her in spite of themselves.

The chemistry between these two is apparent from their first meeting but it doesn't really boil over until the second half of the book, which in turn becomes quite a bit more romantic. There are not as many love scenes as in most historical romances, but when they occur between Mina and Stephen, they are hot and steamy and seem appropriate. Their relationship is build over time and flows quite naturally. I liked the fact that each of them saw something in the other that not only captivated them, but completed them in a sense. Cooper did a great job of making their relationship believable and enchanting.

Unfortunately, there were a few issues with this one. Which are really not that unexpected for a first book in a series, by a debut author no less. Cooper's pace in this one was a bit flawed. It started out intriguingly but slow. Throughout the book there are a lot of small scenes but nothing really explosive until the end. And then all of the sudden it's over. So the start is slow but the ending is rushed. Overall it was still an enjoyable read, but had that stop and start motion that is a little irritating at times.

The other thing that disappointed me was the back story. Usually in the first book in a series an author spends an inordinate amount of time setting up the series. Telling readers and how and why things are occurring. What the characters motivations are, what happened in the past to make the present more interesting. But in this one, Cooper skimps on the back ground and places more emphasis on the here and now. I wanted to know more about the dragons, their history, the reason the villain had it in for Stephen, that kind of thing. I felt it was bit glossed over and not explained in enough detail.

Though this one had some flaws, they were not insurmountable. The characters made up for a lot in their personalities and their delivery of the story. Cooper, like most debut authors, will redoubtable get better, as she goes along. I would definitely recommend this one and read another from this author. There is a lot of potential here, that I think will be realized in future books in the series.

The Legend of the Highland Dragon is available NOW from your favorite bookseller. 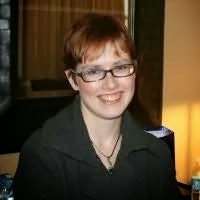 Isabel Cooper lives in Boston with two thriving houseplants. During the day, she maintains her guise as a mild-mannered project manager working in legal publishing. None of the houses she's lived in has been haunted, although one of her former roommates might have dated a zombie. For more visit isabelcooper.wordpress.com.