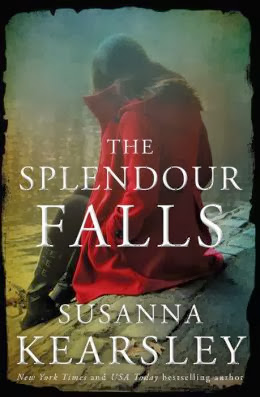 The Splendour Falls by Susanna Kearsley

Excerpt from The Splendour Falls, courtesy of the author's website.


An Ancient Castle, a Tragic Love, and a Web of Secrets Begins to Unravel...
Emily Braden has stopped believing in fairy tales and happy endings. When her fascinating but unreliable cousin Harry invites her on a holiday to explore the legendary own of Chinon, and promptly disappears—well, that's Harry for you.
As Emily makes the acquaintance of Chinon and its people, she begins to uncover dark secrets beneath the charm. Legend has it that during a thirteenth-century siege of the castle that looms over the city, Queen Isabelle, child bride of King John, hid a "treasure of great price." And in the last days of the German occupation during World War II, another Isabelle living in Chinon, a girl whose love for an enemy soldier went tragically awry.
As the dangers of the past become disastrously real, Emily is drawn ever more deeply into a labyrinth of mystery as twisted as the streets and tunnels of the ancient town itself.

Originally published outside the United States in 1995, Susanna Kearsley's novel, The Splendour Falls will now be available in the U.S. Readers will be enchanted by Kearsley's ability to flow smoothly between the past and the present using time/shift and paranormal elements at will. This is a novel about a long lost love, a missing treasure and how a woman from the present uncovers the dark secrets surrounding it. Part romance, part mystery, this novel will appeal to readers of both genre's. With a strong sense of setting and unparalleled attention to detail, this is one readers won't soon forget.

The tone of this book from the very beginning is magical. From the beautiful setting of Chinon, France to the emotionally charged relationships, there is a feeling of enchantment, almost like a fairy tale of sorts. That atmosphere permeated the book giving it a mystical quality that will captivate the reader. Kearsley writing in this book is similar to Susan Erskine who uses paranormal elements and time/shift in her books as well to create a strong sense of time standing still.

Kearsley's attention to detail is remarkable in this book. It is really a feast for the senses. Readers will be able to see the magical beauty of Chinon through Kearsley's words, they will be able to almost touch the face of another character. It is the little things like that, that make a book like this one, enjoyable and different from the norm. I thought Kearsley did a fantastic job of describing Chinon and it's famous castle both in the past and the present. It gives the reader a feeling of nostalgia, like perhaps they visited this place in another life. Quite a feat!

The historical aspects of the book were also a joy to read. From Queen Isabella in the thirteenth century to the second Isabella, each historical figure was drawn with a strong sense of who they were, in history and as characters in the book and the meshed so well it was hard to tell where history ended and fiction began. Being a former history major myself, I enjoyed Kearsley tidbits of information on the times and customs and what was going on in the world in contrast to the present.

I also enjoyed the relationships between the main character, Emily and Paul and Neil. I was really unsure which one of these men she would end up with, but in the end I was satisfied with her choice and how things played out. Kearsley did a great job of showing the pros and cons for each and how Emily struggled with love due to the divorce of her parents. Emily was a very well written main character and her choices were always governed by the way Kearsley wrote her, she didn't do uncharacteristic things or stray from who she was written to be, another hallmark of a good author.

There were a few moments when I felt like Kearsley was rambling or trying to fill in time in some particular scene or the other. It wasn't completely distracting, but it did give me a few moments where I wished things would speed up and get to the good part. The pacing was just a tick off here and there.

I enjoyed this book very much. It was different from my normal read and I felt like the attention to detail made all the difference in the world. Now, I want to go to Chinon, France and have my own adventure. Can't get a much better endorsement than that.

The Splendour Falls will be released from Sourcebooks to your favorite booksellers in mid-January, however you can pre-order from select online retailers.

Check out the Web for some great contest opportunities coming for this book in the next week or so.