Review: A Hint of Seduction 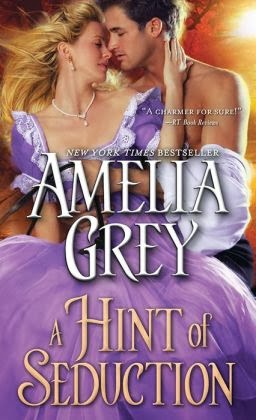 A Hint of Seduction by Amelia Grey

Excerpt from, A Hint of Seduction, courtesy of Amazon's Look Inside feature.

Seeking: A Cad of a Father
The ton believes Miss Catherine Reynolds has come to London to find a husband. They would be surprised to know her real purpose, or that it was Catherine herself who stole the horse of the dashing Earl of Chatwin practically out from under him (it was an emergency, of course). Catherine has learned that her real father—the scoundrel who broke her mother's heart—is still out there somewhere, and she intends to find him.
Found: An Enchanting Earl
Irritated, intrigued, and highly eligible, John Fines, Earl of Chatwin, finds his name on the tongues of half the ton as they speculate about his mysterious lady horse-thief. Catherine needs to help to uncover the secrets of her birth, but if he becomes embroiled in her quest, he may be in danger of losing not only his horse and his reputation as a charmer, but also his heart.

Author Amelia Grey brings readers another romp through the ton, with her latest book, A Hint of Seduction. Grey's sense of character development is the real strength of this novel. It is a light Regency novel that will leave the reader feeling like they have become acquainted with these characters and longing to know more about them. Grey uses interesting sub-plots and multi-dimensional secondary characters to move the plot forward and keep the reader hanging in the balance. With the hint of not only seduction, but a possible new series, this a book Regency fans won't want to miss!

The characterizations by Amelia Grey in A Hint of Seduction are really the star of the show here. Both Catherine and John were so well defined as hero and heroine. The reader gets a real sense of who these characters were meant to be. Her secondary characters are just as well drawn as the lead couple and lend to the possibility that more books may be forth coming.

Catherine is a resourceful young woman who has more than just marriage on her mind. Under the pretense of finding a husband she enters society with ulterior motives. She is searching for a father she has never known. I liked the fact that Grey made Catherine so inquisitive and hard to dissuade from her true goal. She was a woman on a mission in more ways than one.

John with the oh so long last name, the Earl of Chatham is also a great character. He is a consumate ladies man and has no intentions of ever changing his rakish habits, but when he practically runs down Catherine on the rode, he is stunned and doesn't recover quickly. Though eventually he knows he loves her, he still has a hard time coming to terms with the idea of marriage. All in all he seems a good sort even from the start, just a little commitment-phobic. Grey writes him as strong man, who wants nothing more than to help Catherine with her quest to find her father.

The relationship between these two was sweet and tender, even though Catherine steals John's prize gelding on their first meeting and gets the gossip column rumors flowing freely. I thought Grey created a very real connection between the two characters and kept that sense of adventure alive as the book continues. It also created some steamy moments that romance readers will definitely enjoy.

I really enjoyed reading about the secondary characters like Andrew and Lady Lynette, as well as, Catherine's sister Victoria. There is definitely room her for a series and ultimately I think that is where the author is going with this one, and I couldn't be happier.

The secondary plot featuring the identity of Catherine's father has glimpses of greatness, like the idea that perhaps John could be Catherine's half-brother. But somehow it got off track and became a little stale. When Catherine's father is finally revealed, it wasn't the satisfying punch that one might expect. It had kind of fallen flat along the way despite it's potential.

The were also a few faux pas's where Regency rules and decorum were concerned that were not essential to the story, but a wee bit annoying to readers who a true fans of the Regency time period.

All in all this was good book. A very sweet romance, exceptional characterizations, but lacking a little pizzazz. It didn't grab me like some romances do, however I love Amelia Grey's writing and look forward to the possibility that this may turn into a series.

A Hint of Seduction is available NOW from your favorite bookseller. 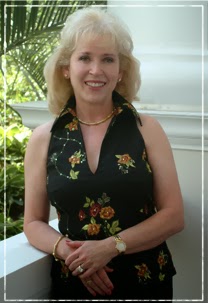 New York Times and USA Today bestselling author Amelia Grey's awards include the Booksellers Best and the Aspen Gold, and writing as Gloria Dale Skinner, the coveted Romantic Times Award for Love and Laughter and the prestigious Maggie Award. Amelia read her first romance book when she was thirteen and has been a devoted reader of love stories ever since. She is the author of over twenty-five books. Happily married to her high school sweetheart for over thirty-five years, Amelia lives in Panama City Beach, Florida.