Review and Giveaway: A Churn for the Worse 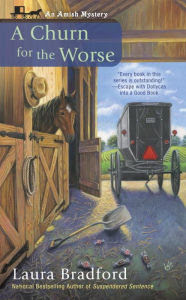 Excerpt from A Churn for the Worse, courtesy of Amazon's Look Inside feature

Coverart: Click on the photo for a larger, clearer view of the titles in this series

The national bestselling author of Suspendered Sentence returns to  Heavenly, Pennsylvania, where shop owner Claire Weatherly and Detective Jakob Fisher must put on their thinking kapps to solve a string of robberies and a murder in the Amish community...When an Amish farmer is found dead in his barn, his family accepts his death as God’s will. But Detective Jakob Fisher knows the farmer didn’t hit himself in the head with the shovel lying beside his body. And when it comes to light that a stranger appeared at the farmer’s home and now money is missing from their milk can, Fisher suspects robbery as the motive—especially when another Amish family is victimized. Getting to the truth proves difficult, however, since Fisher has two strikes against him in the eyes of the Amish—his chosen career, and the Amish roots he left behind. Desperate to stop a murderous thief, Fisher turns to Heavenly Treasures shop owner Claire Weatherly for help. The trust she’s earned from the Amish community enables her to go where the detective cannot—straight into the path of a killer...

Laura Bradford returns to the Amish Mystery series with her fifth book, A Churn for the Worse. Bradford's portrayal of the Amish community is both heartfelt and forthright and readers who like a little mystery added in will love this one. With strong, multi-layered characters and a love for family and community this story will speak to many different kinds of readers. Readers looking for a great mystery need not look further. A dead Amish farmer, missing money and a missing racehorse, add up to a great cozy read from Laura Bradford.

I always love returning to Heavenly with each new addition to this series. Bradford has a way of bringing this Amish community to life. The characters are so well drawn that they seem like real people a reader might meet on the street. Where I live in Kentucky there is actually a thriving Amish and Mennonite population and I can't help but compare the characters in Bradford's books to Amish people I have met in my own backyard. She does such a wonderful job of bringing these characters to life and exploring their issues and problems without being judgement or having a bias for or against the Amish people. Very well done on that aspect of the book.

As always with any cozy. The mystery has to take center stage. In A Churn for the Worse, readers get a two for one experience. Not only do they get the main mystery of the story involving a stranger, some missing money and a dead farmer, but they also get a great side mystery involving a missing racehorse. Readers get their money's worth with this book and then some. The mystery aspects of the story are well written and entertaining. I thought I had it figured out early on, but I was totally wrong. I love it when that happens. It means the author was very good and letting the clues add up to more than one culprit.

Claire and Aunt Diane end up in the middle of this mystery for several reasons. Detective Jakob Fisher needs some help. He isn't everybody's favorite policeman. He was once Amish and he is not trusted among the community members. Claire however has won a lot of trust because of her past attempts at amateur sleuthing and she is able to garner a lot more information than Jakob. I love how these two characters work together and are able to solve the crime and put the community at ease. I also enjoy all of the interplay between Claire and Jakob and hope that it eventually leads to more.

There wasn't too much to dislike about this one other than the fact that I think Bradford needs to diversify a bit. Her stories in this series have all been different of course, but they are sometimes a bit predictable. This one wasn't and I believe that makes it the best of the series so far. If Bradford continues to change it up a bit I think this series could be a very long lived one, with a great following.

Best of the series, hands down. This is a great mystery with plenty of suspects, red herrings and great interaction with the Amish community. Heavenly, is one of those towns a lot of readers will wish was real. Great characters and a great portrayal of the Amish. Bradford is on to something with this series and I think readers who haven't tried it are really missing out.

A Churn for the Worse is available NOW from your favorite bookseller. 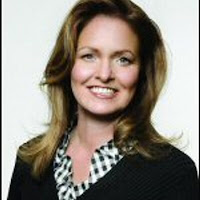 While spending a rainy afternoon at a friend’s house as a child, Laura Bradford fell in love with writing over a stack of blank paper, a box of crayons, and a freshly sharpened number two pencil. From that moment forward, she never wanted to do or be anything else. Today, Laura is the national bestselling author of the Amish Mystery series, including Suspendered Sentenceand Shunned and Dangerous, as well as the upcoming Emergency Dessert Squad Mystery series.

The publisher is sponsoring a giveaway for one copy of, A Churn for the Worse by Laura Bradford.

* You must be an email subscriber to participate
* U.S. Addresses only
* The deadline to enter this giveaway is, Midnight EST, March 17th.

1. Please leave a comment describing any interactions you may have had with the Amish community.
2. Please fill out the FORM.

I really haven't had any interaction with Amish, although I know they are sprinkled in the southern area of the state.

I haven't had any interactions since I left the East Coast in 1961. Not much Amish in So Cal.

Almost every year we go to the Amish Country in Pa with friends. We enjoy the food and really have only interacted with the people at restaurants. My husband was a teacher and did get to visit a schoolhouse.

I have visited several Amish communities and love shopping their stores for the homemade crafts. OH, and the restaurants, very good food and kind people.

I have never had any interaction with the Amish community but I have read a number of novels that take place in Amish communities!

I have never had any interactions with the Amish community. saubleb(at)gmail(dot)com

There is at least one Amish community within a couple of hours or so of where I grew up, but I don't recall ever visiting or having any interactions with any who belong to an Amish community.

I live in Ohio and years ago when we went down to visit my great aunt we would see the Amish buggies. I think we saw the Amish at the grocery store, too. This was down in Ashland or Mansfield, Ohio.