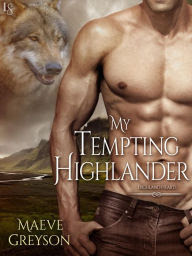 (Received for an honest review from LoveSwept)

Excerpt from My Tempting Highlander, courtesy of Amazon's Look Inside feature

Coverart: Click on the photo for a larger, clearer picture of the titles in series

From the author of My Highland Bride—hailed by Sandy Blair as “an entertaining time-travel story packed with spice, humor, fantasy, and nonstop adventure”—comes a sensual novel featuring a wolf-shifting chieftain who travels centuries to modern-day Scotland to tame his one and only. Cursed to live forever with neither wife nor child, Ronan Sutherland has watched all he cherishes turn to dust—more than once. For hundreds of years, he’s been trapped behind the mists of Loch Ness, hoping to identify the one woman who is prophesied to break the spell. Now, at last, the fates have aligned, and he’s being sent into the future to fetch her. After a single glimpse, Ronan knows he’s been waiting all his life for this passionate woman. Unlike her time-traveling sisters, Mairi Sinclair is perfectly content to remain in the present. As a hospital nurse in Edinburgh, she cherishes the opportunity to put her gift of healing powers to good use. But everything changes the morning a mysterious wolf darts in front of her car. Touching the wounded creature’s tawny coat, a tingle surges through her. Yet when she returns with aid, Mairi is shocked to find instead a man with broad shoulders and fire in his eyes—a man who tempts her to unleash the animal within.

Maeve Greyson brings readers the third book in her enchanting Highland Hearts series. My Tempting Highlander has it all. Curses, dragons, witches and shifters, to name a few. Greyson gives readers an interesting take on time travel romance. The Scottish backdrop is well written and readers who love a good Scot will not be able to resist Ronan. A great new book, by Maeve Greyson.

What's not to like? I love a good romance especially if it involves a Scot. Maeve Greyson's Highland Hearts series, certainly indulges me on that point. The heroes and heroines in this series are either from Scotland of the past or have been living in present day Scotland. Being of Scottish descent it's always important to me that the characters represent the highland spirit and the true nature of the Scottish people. Scotland is steeped in myth and magic and I think Greyson does an amazing job of bringing that out in her novels.

In My Tempting Highlander readers see a lot of that magic, whether it is in the plethora of paranormal characters or in the time travel aspects of the story. Greyson doesn't just stop with one of two paranormals in this one. Sometimes that is a bad thing. Just too much going on. But in this one it works.

Ronan Sutherland, our hero, is under a curse, but it's not just him. His mother was turned to a wolf, he was turned to a wolf-shifter and his best friend was turned to a dragon. There is one way to break it, but it involves a time traveling sister with the ability to heal, that is being looked after by a witch. Confused yet? It might sound a little daunting, but the result is a fantastic paranormal, time travel, Scottish romance! Lol, that was a mouth full!

Oh Ronan! I loved our hero in this one, but he does have a fault. He tends to stretch the truth a little bit, leave out stuff and generally tell a few white lies. Mairi, happens to be able to tell when he's lying, which did not bode well for him. The author may have wanted to show the reader that the hero was in some way flawed. She may have wanted to use this as conflict which is necessary in any good story. But, honesty is important, no matter what you are talking about. So that bugged me a little bit. Not enough to not like the character or the book, but it niggled a bit.

Even though there was a lot going on in this one, it all came together beautifully. I was looking forward to Mairi's story and Greyson did it justice. I liked Ronan a lot despite his issues with the truth. Scotland is all about magic and mystery and Greyson never fails to bring that out in her books. The time travel was a great bonus. I love Scotland, past, present and most likely future and Greyson portrays her well. A very enjoyable book!

My Tempting Highlander is available NOW from your favorite bookseller. 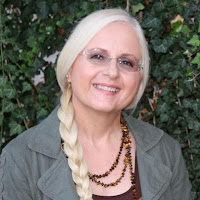 When I’m not at my full time job at the steel mill, I’m tapping away on my laptop, recording my daydreams of sexy Highlanders and the headstrong women who drive them crazy.

I also think of myself as a “watcher”. I live in the middle of a five acre wood in Kentucky, sharing the clearing where our house sits with deer, raccoons, possums, wild turkeys and even a groundhog. Did you know they’re also called whistle pigs? I discovered why when Jasper startled Hamish McGroundhog. Hamish whistled the alarm and startled everybody.

My sweet friend Jasper has crossed over the Rainbow Bridge but I know in my heart he still watches over me. He’s my four-legged guardian angel.

I also enjoy people-watching—you know, kind of floating along the edge of a crowd and observing how folks go about their day. All this watching feeds into my stories so take care, you never know when a writer might be watching.
Posted by justpeachy36 at 10:00 AM