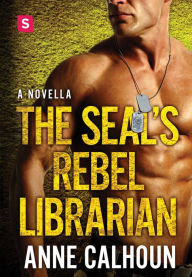 (Received for an honest review from Swerve) 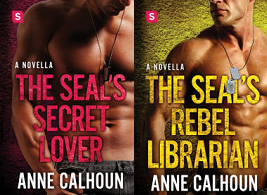 Excerpt from The SEAL's Rebel Librarian, courtesy of Amazon's Look Inside feature.

The second in the Alpha Ops novella series that features an alpha Navy SEAL and the librarian who brings him to his knees.

Jack Powell never planned on leaving the Navy, but his final mission as a SEAL left him with a tremor and a bad case of nerves. He's home, taking some college classes and trying to figure out what comes next when he meets Erin Kent, a divorced college librarian with an adventurous bucket list and a mission to get her ex-husband's voice out of her head. Jack guides Erin through skydiving and buying the motorcycle of her dreams, blithely accepting Erin's promise that their relationship is purely temporary. But when Jack gets the chance to go back into the shadowy world of security contracting, can he convince Erin to break her word and join him on the adventure of a lifetime?

Anne Calhoun returns with the second Alpha Ops novella, The SEAL's Rebel Librarian. What happens when a sexy, Navy SEAL meets a divorced librarian with a wild side? A lot! Calhoun writes a passion filled short that will have readers swooning. This one night stand turns into a whole lot more than the characters bargained for. Motorcycles, skydiving, walking on the wild side... This one has that and more!

Anne Calhoun is one of those authors that has a lot of versatility. Her shorter stuff, novella's in particular are just as well thought out as her full length novels. She has a knack for knowing what to keep and what to throw out when it comes to length and still keep the story just where the reader needs it to be. I'm not always a big fan of novellas because most authors cannot shorten or temper their writing enough to make the story line believable, but Calhoun does a great job with that in her latest, The SEAL's Rebel Librarian.

Jack is a Navy SEAL, but his last mission was a tough one and needs some time to recover. He has PTSD and his nerves are getting the best of him. During his down time he decides to take some college classes which put him right in the path of the university Librarian, Erin. I liked the premise of this novella. Jack needs to get out of his head a little bit and Erin is just the person to help with that. It's a no strings attached romp that leaves them both a little breathless. When Jack finds out that Erin isn't quite the straight laced librarian type, he begins to help her let loose and let go. It's a story about Erin embracing who she wants to be and not who she thought she had to be. I liked that Calhoun doesn't get too deep in the relationship mire. She just lets this romance take off and bloom.

Erin's relationship with her ex husband must have been a real doozy! She was a great heroine. Ready to find out for herself what she enjoyed whether that be a motorcycle or a Navy SEAL. She let her hair down in a big way, but she also wasn't afraid to be vulnerable and fall in love again. I liked that she wanted to take some risks and see where they took her. An all around enjoyable character!

Jack was swoon worthy to be sure, but he also had his issues. He wasn't the perfect hero. He had flaws and that made him seem all the more realistic. He wants to get into the fray, but it's been hard on him and I got the feeling that this character was wondering if it was worth it at times. A great short portrayal of the effects of PTSD that will certainly bring awareness to the issue to those who read it.

Well, it was a novella. I like novella's in a sense and in another sense I don't. Anne Calhoun does a great job of making the length constraints work for her because she knows how to get what she wants to get across, across... lol! But I still wanted more. I wanted more of Erin and Jack. I wanted to know what happened next. I was a little disappointed that it ended, but that can be a good thing. I hope to see more of them in the next addition to this series.

The other issue I had with this one was that it is touted to be romantic suspense because of the title of the series. I realize that Jack was a part of the Alpha Ops, but that really played very little part in the story itself. I went back and changed the genre from romantic suspense to contemporary romance because I felt like it was a little misrepresentative of the genre. If you are going to call something Alpha Ops, it probably should have some Alpha Ops in it.

This is a good story. Anne Calhoun did a great job of giving the reader believable characters and a story line that really fit with the idea of a one night stand turning into something more. It was short and sweet and hit a lot of the right buttons for me. But I wanted more, I always do... I didn't think this was romantic suspense and that was what I was expecting from the name of the series, but that didn't make it a deal breaker. Still a good story. Still a great author!

The SEAL's Rebel Librarian is available NOW from your favorite bookseller. 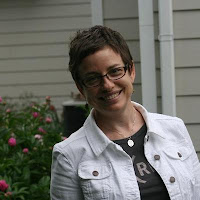 After doing time at Fortune 500 companies on both coasts, Anne landed in a flyover state, where she traded business casual for yoga pants and decided to write down all the lively story ideas that got her through years of monotonous corporate meetings. Her first book, LIBERATING LACEY won the EPIC Award for Best Contemporary Erotic Romance and was chosen as one of NPR’s 100 Swoon-worthy Romances. Anne holds a BA in History and English, and an MA in American Studies from Columbia University. When she’s not writing her hobbies include reading, knitting, and yoga. She lives in the Midwest with her family and has overcome her Starbucks addiction.
Posted by justpeachy36 at 11:00 AM