Review: How to Handle a Scandal 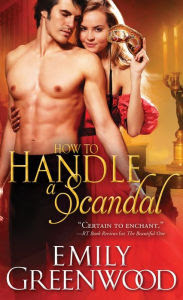 Excerpt from How to Handle a Scandal, courtesy of the author's website

Scandalous Sisters
1. The Beautiful One2. How to Handle a Scandal

Coverart: Click the photo for a larger, clearer picture of the covers in this series. 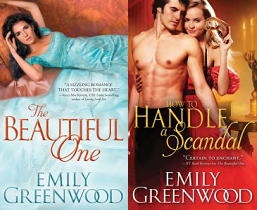 They thought the debutante was scandalous
Miss Elizabeth Tarryton was the toast of the London Season the year she was seventeen and spurned young Tommy Halifax. A careless flirt who didn't know what she wanted, she was startled into laughter by his public proposal of marriage. Furious and heartbroken, Tommy promptly left home for a life of adventure in India.
If they only knew about the widow
Seven years later, Elizabeth has much to make up for, but the methods she chooses for doing good are as shocking as her earlier wanton behavior―should the ton ever find out. Tommy returns to England a hero, with no intention of allowing himself to be hurt by a woman ever again, but he's fascinated nonetheless by Elizabeth, now widowed and more alluring than ever.

Emily Greenwood returns to her Scandalous Sisters series with How to Handle a Scandal. Greenwood is a proven Regency writer, who knows the ins and outs of the ton like the back of her hand. Readers who love a good second chance romance will find this one enchanting, if a bit trying at times. Greenwood is always good for a great scandal and when Lizzy laughs at Tommy's high profile proposal, sparks fly. But there is still more scandal in their future and readers will find these intense characters full of surprises.

I can totally believe that a young girl could laugh at a young man's proposal. Been there myself actually. I don't think Eliza meant to be so insensitive, but Tommy certainly didn't see it that way. Emily Greenwood gives readers an interesting premise for her latest book, How to Handle a Scandal. Readers get a second chance romance, but that's not all. Scandal abounds, and that is definitely what a reader looks for in a great Regency novel. If an author can pull off a good scandal, half of the battle is won with her audience. Greenwood proves she can do that here.

Tommy isn't the wide eyed young man he once was when he returns to the ton. He is being knighted for his service and doesn't have any plans for romance. But as often happens, one thing leads to another and he ends up in the middle of another scandal... with the same woman, no less. I liked Tommy even though he has become a bit jaded where women are concerned. He could be harsh and he seemed a bit unfeeling at moments, but I'm telling you, Eliza could make a priest curse. This was one hard fought HEA. He had his hands full and it wasn't what he bargained for.

I can see Eliza making a turn around. She grows up a lot in this novel. She changes for the better. Since she is a widow with a lot to make up for, seeing her mentor young women to keep them off the streets was satisfying. She has a new purpose in life. But she tends to go a bit overboard with everything. Dressing the part of a prostitute in an actual brothel, probably not the learning experience she expected. I found her a bit childish at times, bratty, self serving. I wasn't too sure she was the right woman for Tommy even after all these years.

The heroine in this one was a bit much for me. I liked parts of her story, but other parts left me a bit aggravated. She wants to make a great turn around in her life and she does, but not when it comes to the romance of the story. She lies to Tommy, time and time again. She tricks him, she throws temper tantrums and just made me a little disgusted with her at times. The action lagged a little because of it and I just felt he deserved a lot better. Not the kind of feelings you want when it comes to a good romance.

Loved the hero, even if he was a bit gruff at times. Liked the heroine in some ways and detested her in others. Not the couple I would have chosen. The scandal was good, well written. The heat was good to a point and certain will cause some readers to need a fan. But the romance was a bit flat, because the heroine wasn't very honest and when she did tell the truth, she made it seem like the hero was to blame. Ughhh! I was wringing my hands with this one. Take it with a grain of salt, you might like Eliza, she just wasn't my cup of tea.

How to Handle a Scandal is available NOW from your favorite bookseller.

Emily Greenwood worked for a number of years as a writer, crafting newsletters and fundraising brochures, but she far prefers writing playful love stories set in Regency England, and she thinks romance is the chocolate-and in some exquisite cases, the wine-of literature. A Golden Heart finalist, she lives with her husband and their two daughters in Kensington, Maryland.
Posted by justpeachy36 at 11:00 AM