Deb was kind enough to invite me to stop by and talk about a guy writing Jane Austen-inspired historical romance. (Try saying that three times fast.)


I was first introduced to Jane Austen, like many people, by one of the filmed adaptations. Mine was the 1981 BBC mini-series starring Elizabeth Garvie shown in the US on PBS’s Masterpiece Theatre. It’s still the best version, IMHO. I went out and got a copy of The Collected Works of Jane Austen and read all of her major works. She is fantastic—you really ought to read her. Years later, around 2000, I discovered Jane Austen Fan Fiction, and the rest was history.


Some say it’s unusual for a man to write historical romance, but I beg to differ. True, Austen and the Brontë sisters were giants in the genre, and Georgette Heyer had an enormous output. But I must say that most of the classic romances were written by men.


Just a sample of the best romances: Ivanhoe. The Last of the Mohicans. The Odyssey. The Scarlet Letter. A Tale of Two Cities. Anna Karenina. War and Peace. Riders of the Purple Sage. Lady Chatterley's Lover. And, of course, The Collected Works of William Shakespeare. 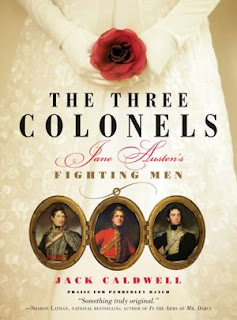 It’s correct to point out that men have been allowed to write for eons while women have only gotten into the game in the last two hundred years. Who knows what would be out there if things were different. But a classic is a classic. It doesn’t matter who writes it, and you can’t say that the stuff above isn’t great.


So what is it that men bring to the romance genre?


1. We’re male. We write as men think. Unfortunately, ladies, we really do think differently than you. One of Austen’s strengths as a writer is that she understood men. She wrote us as we are, not as ladies think we ought to be. Not all female writers can do that. Frankly, I can’t relate to the Brontë sisters’ men. To me, Rochester of Jane Eyre is weak and Heathcliff of Wuthering Heights is abusive.


2. We’re exciting. We like a little action mixed in with the romance. We like a big canvas where important events are happening. Conflict is more than a misunderstanding between lovers. War, gunfights, surviving terrible calamities, for example. All apologies to Heyer and Margaret Mitchell, of course.


3. We reinforce the fact that there are decent, dependable men out there. We celebrate the nobility of good, brave men and women. Good men want good women. The Cajun secret to a happy marriage is to treat your wife like a queen. Trust me, it works. So we put that in our books. We do have a habit of placing our heroines on a pedestal, but so what? Didn’t Austen do that with Mr. Darcy and Colonel Brandon?


4. We confirm all the stereotypes women have about men. We’re single minded, we have sex on the brain, we love sports, we hate talking about our feelings, we spoil our kids, we need improvement, and, except for Rev. Tilney, don’t give a darn about lace. Let that be a comfort to y’all.


I hope you have enjoyed this little excursion into the mind of a male writer. If I haven’t scared you off, I hope you will enjoy THE THREE COLONELS.


And remember, it takes a real man to write historical romance, so let me tell you a story.


What are your favorite novels written by men? What have I missed? Let’s have some fun!

The publisher is sponsoring a giveaway for two copies of The Three Colonels by Jack Caldwell.

~ You must be a GFC follower or E-mail subscriber to participate.
~ US and Canadian addresses only!
~ The deadlline to enter this giveaway is Midnight EST April 3rd.

1. Please answer Jack's question at the end of the post.
2. Please fill out the FORM.
Posted by justpeachy36 at 11:15 AM

I can't think of any male historical romances writers other than the ones Jack listed but I did love The Scarlet Letter!

My favorite novel recently written by a man is Shadow of the Titanic by Andrew Wilson. I really loved it! I want to read this book. Thanks for the chance to win it!

A favorite novel written by a man? Hmm. I love Susanne's Diary for Nicholas by James Patterson.
Thanks so much for the giveaway! :)

I don't think I have a favorite male romance author - unless he is published under a woman's name. But I recently read Daniel Palmer's debut thriller and I liked his style. It had a light romance in it - the start of a relationship, acting on an impulse kind of thing - that was just enough for the story. Perhaps I will be able to add a male writer to my short list ;-)

Thanks for all the great comments!

I don't read a lot of romance. It has to be really exceptional to get me to go there! I am a mystery, vintage at that,person. But I loved Anthony Trollope's 'Palliser' books. Your novels does sound good!

I love all of the novels by Nicholas Sparks.

It would be hard to say which was a favorite, I pretty much loved everything Andrew Greeley, James Patterson and Robin Cook did.

Hi, I'm an email follower: carlscott(at)prodigy(dot)net(dot)mx
In answer to Jack's question I think a lot of people forget about the romantic aspects of Jack Kerouac's On The Road. One of the main side-trips in the book is the story that was published before the publication of the actual book and entitled "The Mexican Girl"

I have a few favorites. Message in a Bottle by Nicholas Sparks, The Skin of Water by GS Johnson, Atonement by Ian Mcewen just to name a few.

The3Colonels have been on my WishList since Jack announced the title!!!!
thank you for this giveaway!!!

I enjoyed your post. I liked The Notebook by Nicholas Sparks.

My all time fave novel written by a man is The Notebook by Nicholas Sparks! It was so emotional and passionate - it's hard to believe a man wrote it! LOL

I have to say other then the ones you listed Jack it would be, James Patterson, Nicholas Sparks and Robert Paul Evans. I'd love to read your book Jack. Thanks for this opportunity.GFC name is Lucky47. Email subscriber.
Carol L
Lucky4750 (at) aol (dot) com

I look forward to reading this!

I don't know that I have ever read a male romance writer. I can't wait to read this one!