CoverArt: Click the picture for a larger, clearer image of covers in this series. 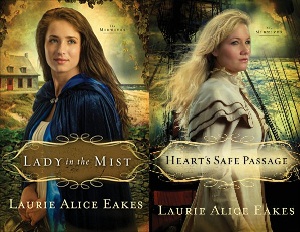 
ONE WOMAN TAKES THE TREACHEROUS JOURNEY TOWARD REDEMPTION... AND LOVE.

All Phoebe Lee wants out of life is to practice midwifery in London County, Virginia. But when she refuses to accompany her pregnant sister-in-law to help save her husband from prison during the War of 1812. Phoebe finds herself pressed aboard a British privateer.

Captain Rafe Docherty promises to get Phoebe's brother-in-law out of prison in exchange for information Rafe needs to exact revenge on the man who destroyed his family. As he realizes his attraction to Phoebe, she determines to get ashore before her patient goes into labor - and before her own heart is in danger. But an enemy in their midst threatens to end their plans - and their very lives:


Laurie Alice Eakes brings readers a book that is a feast for the senses. The second book in Eakes' Midwives series, Heart's Safe Passage, is part romance and part adventure on the high seas. America and England are at war and so are the main characters of this book, fighting not only each other, but their own pasts. Eakes has the ability to draw the reader into her story in every way, with characters that resonate with the reader, descriptions that will have the reader feeling the salty sea air and smelling the dank insides of a privateer's ship. This is a book that will have readers feeling the full gamete of emotions. Great sophomore book in a great historical series!


Laurie Alice Eakes has a gift that not many authors can boast. Her writing style is so descriptive that the reader will use just about every sense from taste to smell, while reading this book. I thought it was amazing how well Eakes was able to put the reader not only in the center of the action but into the very essence of the scene. I like it when an author understands what makes a scene grip a reader. It's often being able to see that scene pan out like a clip from a movie in the reader's minds eye and that's done with very descriptive wording. How many authors have you read, who describe the smells the characters are sensing? Very realistic and very well done.

Another big selling point in this one is the depth of the characters. They are so multi-faceted. Nothing is cut and dried with this one. Some of the characters that readers learn to love and respect can still show their faults and vulnerabilities and some characters readers find distasteful and hard to like, show surprising moments of compassion and likability. It's the yin and the yang, a little good in every bad thing and a little bad in every good thing. But it makes for some really interesting reading. It's unpredictable and thought provoking.

Phoebe is a woman who just wants to be able to practice her gift for midwifery. She isn't asking a whole lot it seems, but it has been a difficult road for her. Her past is never really far from the surface. Rafe has one thing on his mind, revenge or justice, ever how you want to paint that picture. He's determined and intent on his purpose. When these two characters collide, it's pretty magical. Most Christian romances don't go much beyond the surface with the feelings and emotions that the characters are feeling, but I'll have to say Eakes makes this love story engrossing and at times very satisfying for readers who love romantic fiction. The chemistry between these two characters is as amazing as their journey toward resolving their own issues, with faith and the reality of life.


Available February 2012 at your favorite bookseller from Revell, a division of Baker Publishing Group.

I'm giving the one 5 out of 5 apples from my book bag! 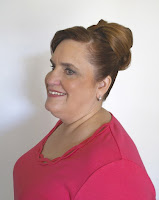 Laurie Alice Eakes is the author of Lady in the Mist, A Necessary Deception, and several other novels. She won a National Readers Choice Award for Best Regency in 2007 for Family Guardian. Laurie Alice writes full-time from her home in Texas, where she lives with her husband and sundry dogs and cats.
Posted by justpeachy36 at 9:30 AM