Excerpt from Geared for Pleasure (Warning: This excerpt may not be appropriate for readers under the age of 18 years)


THE WORLD OF THEORREY RUNS LIKE A WELL-OILED MACHINE. THE ELEMENTS ARE IN BALANCE, PASSION IS TAMED, AND THE YOUNG QUEEN IS THE HEARTBEAT OF IT ALL... BUT IN THESE TWO ALL-NEW STORIES OF ELEMENTAL STEAM, NOTHING IS EVER AS IT SEEMS...

Demeter "Dare" Senedal is the Queen's Chalice - her protector and closest companion. So when the queen goes missing, Dare rushes to locate her, even though the search leads her straight into trouble.

A gentleman who trades in secrets and sin, Bodhan revels in carnal delights. But when a naked and bound woman appears on his shore, he finds his hunger to possess her at odds with his need to protect her. As Bodhan shares his knowledge of pleasure, Dare must decide if she can trust him, both with her mission and her heart.

Seraphina always lands on her feet. After all, she is a Felidae - at times more feline than human - and an excellent thief. There has never been a job Phina wouldn't take or a man who could tame her... until she meets Cyrus Arendal.

As the Queen's Sword, Cyrus should have known better than to fall victim to a beautiful bandit. Now, to find and retrieve the moonfire dagger, he'll need to convince Phina not to judge a man by his station, but rather by how completely he can satisfy her desires.


Rachel Grace brings readers a erotic steampunk novel that will literally have steam rolling out their ears. Geared for Pleasure is the first book in Grace's new Elemental Steam series and it starts off with a bang. Readers who enjoy passionate, adventure laden novels will be drawn to this one. Grace has a way of bringing her characters close and letting the reader see something of themselves in each one. Her sense of description is vivid, especially in her world building. Geared for Pleasure is sure to garner Grace new fans and introduce readers to a sub-genre they may have previously overlooked.


How many of you know what steampunk is? I would dare say that some of you may have read a steampunk novel or at least heard the name bantered back and forth. I wanted to give you a little description on what that means, so I looked it up:


STEAMPUNK: (noun)  a subgenre of science fiction and fantasy featuring advanced machines and other technology based on steam power of the 19th century and taking place in a recognizable historical period or a fantasy world.

I thought that was a pretty good way to sum it up. This gives readers a description of part of what they'll see in Rachel Grace's new book, Geared for Pleasure, but it's so much more than that. Rachel blends her steampunk elements with eroticism and with her own world building skills, creating something that is steampunk like, but not exactly steampunk. Confused yet? LOL! You shouldn't be! This is a very unique book from a very unique author.

I have reviewed books from Rachel Grace's alter-ego, R.G. Alexander and found them to be very enjoyable. I was excited to get this one to review but I have read a few clorkwork/steampunk books and was hoping to broaden my horizons just a bit with this one. I was totally captivated from the first page, but the excellent world-building that Grace employs. Theorrey is a cool place, with some complicated political machinations afoot. Grace draws the reader in and quickly gets a firm hold on them. The characters enhance the world that Grace has built and the grip gets a little stronger. But when the romance starts to rear it's head, it becomes a vice grip. Readers will have a difficult time putting this one down, it's riveting... literally.

Grace divides her book into two parts, which sometimes takes away from the overall effectiveness of a book, but in this particular case, I think it works. The first story, "Earthly Desires" is as much an introduction to Grace's world as a story in itself. The relationship between Dare and Captain Bodhan is intense and electrical. These two cause a lot of fireworks in and out of the bedroom as Dare searches for the missing queen.

The second story, "Fiery Temptations" picks up the tale of Cyrus and Phina, whom readers met in the first story. It's almost like the continuation or a what happens next kind of story. Cyrus must get a hold of the moonfire dagger and he might need a thief to do it. Phina is at times very catlike and she understands stealth like no other, but she has to decide if Cyrus is worth trusting with her desires.

Both of the female heroines are strong and capable. In Dare's case shes ends up finding her soulmate. For Phina her past with Cyrus is so complicated it's hard to see them getting past it. Both relationships are hot and steamy. Grace has a way with writing erotica that gives is a very sensual and luxuriant feeling. Her characters are just as passionate in the bedroom as they are in their daily lives. I liked the fact that the passion helped to move the story along, but it wasn't the main focus. There is real substance to this book that I think readers will appreciate.

If you are interested in trying out steampunk, this book is a good choice. It's steampunk, but it's also something more. You'll definitely be hooked once you get a sense of how this one is going to go and I'd dare say if you choose to read it, it won't be your last steampunk related book. It's only the beginning!

Geared for Pleasure is available NOW from your favorite bookseller.

I'm giving this 5 out of 5 apples from my book bag! (One of my favorites of the year so far) 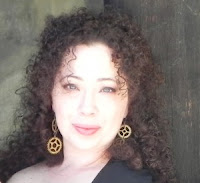 When not lost in daydreams of sword fights and sexy bedroom scenes, she can be found working on her steampunk costume for the annual photoshoot with her group blog The Smutketeers.

Thank you so much for that wonderful review!

Your very welcome. I loved the book, looking forward to what comes next in Theorrey. Well done!

Can anyone tell me when the next one is coming out?