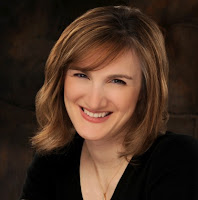 Please join me in welcoming Amanda Forester back to Debbie's Book Bag. Amanda is promoting her latest release, True Highland Spirit. Amanda answers some questions about her future plans and even a little something that most people don't know about her. The publisher is sponsoring a giveaway for two copies of Amanda's book, see details at the end of the post.

DEB: Tell us about your latest release, True Highland Spirit. Is this a single title, a part of a series, etc.
AF: My most recent release, True Highland Spirit, is the third in a trilogy set in the 14th century Scottish Highlands.  Morrigan McNab learned to survive with a sword in her hand. Taking command, she is determined to protect her impoverished clan, no matter the cost. When an elusive French knight offers gold to fight against England, she joins the call to arms. Sparks fly on the battlefield as a forbidden passion smolders between Morrigan and Sir Dragonet. Yet Sir Dragonet holds a secret that will destroy the hope for a life together, and will make them rivals on a dangerous quest for a mysterious relic. As they fight beside each other against the English, and against each other to find the treasure, their love becomes a greater force than either can control.

DEB: You've written several books set in the Scottish highlands, how did you get interested in writing Scotland and it's people?
AF: This is an interesting question because I initially intended to write a historical romance set in the Regency, and somehow I ended up wandering about the Scottish Highlands in the 14th century.  I guess my time machine was a little off track.  I blame it on the kilts!

DEB: I am of Scottish descent myself and several of the legends and stories of Scotland are popular in mainstream romance and even paranormal titles, do you make use of these tales and beliefs in this series, or is that something you've shied away from?
AF: I enjoy using the traditions and customs of the time to enrich the story and infuse the story with the wonderful aura of Scotland.  In my books I have thrown in popular holidays for the era, such as St. John's Eve and Hogmanay, and common beliefs such as the ghost of Robert the Bruce.  I have also incorporated the history of the time, such as the wars between England and Scotland.

DEB: What kind of research did you do for this novel? Were there specific aspects of the book that you needed more information for?
AF: I love learning more about history.  Before I start to write I do a lot of research about the era and put together a timeline of events, popular holidays, and people.  Fortunately, so many sources are online, especially the online access to books, which makes it possible for me to do research with old source documents.  Naming my characters is a bit of a process.  Since the name is attached to a clan with its own history, I need to research different clans until I find the traditions that fit.  Often it is a creative process where I come to the research with a certain idea, and then I will read about a particular custom or historical occurrence and I know I need to incorporate that into the story.  For True Highland Spirit, when I found that there were French Knights running around the Scottish Highlands in 1355, I knew there was a story there I needed to write!

DEB: When you start writing a novel, which happens first the idea for the story or a does a particular character come to life in your mind? What kind of pattern do you use?
AF: It always starts with the character for me.  I usually get an idea about the character doing something around the middle of the book.  Then I need to figure out what happened to lead up to that point, and where she is going from there.  I sometimes wish I was more of a linear thinker, but my brain often jumps about until I can find the right rhythm.

DEB: A lot of my readers are writers as well and they are interested in what your take is on the debate about print books versus e-books? Do you think this helps or hurts the publishing industry?
AF: Your question is a really good one.  I wish I had an equally good answer!  I think this is the question of the hour, one that publishers and authors are trying to figure out as they go.  Clearly more and more people are going to chose to read books on their e-readers, so these sales are going to rise.  I think the changing landscape certainly gives authors more choices in terms of publishing, which as an author I think is a good thing.  I also am a bit old school and prefer to read my books on good ol' paper (sorry trees!) and I know I'm not alone in that.  Honestly, I'm not sure where all this is going, but I think increased options can only mean increased opportunities for both authors and publishers.

DEB: Do you have advise for new writers?
AF: Keep writing. A writer is someone who writes.  I have to remind myself of that sometimes because my computer, where I'm supposed to be writing, is also my access to all sorts of distractions: twitter, blogs, videos of cats doing silly things, all those random things that keep me from actually writing!

DEB: What are you working on right now? Or what are your future plans as far as writing goes?
AF: I am trying to find my way back to Regency England and plan to release a new book next year about a ruined debut, Napoleonic spies, and a team of matchmakers.

DEB: Tell us one thing about you that readers may not know?
AF: One thing about me people probably don't know is that along with romance novels I also love comics!  Superheroes - my secret passion!  The truth is revealed! 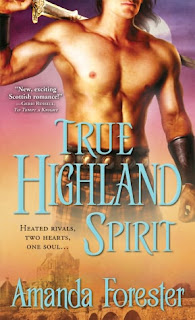 The publisher is sponsoring a giveaway for two copies of True Highland Spirit by Amanda Forester.


~ You must be a GFC follower or an E-mail subscriber to participate.
~ US and Canadian Addresses only!
~ The deadline to enter this giveaway is Midnight EST April 9th.


1. Please leave a comment in appreciation to the author on this post, not the form.
2. Please fill out the FORM.

thanks for the giveaway

Another great interview! Thanks!

Thanks for inviting me to chat today!

Great interview!!!! I have so been wanting to read this book. It sounds amazing.

Thank you for another chance to win. Giveaways are awesome which makes ya'll awesome :)

Book I'm sure will be as good as Highlander's Heart. Can't wait to read it.

I think adding traditions of a book's setting will make a story more interesting.

Thanks for the giveaway. I really want to read this book. It sounds awesome. Tore923@aol.com

I agree with you, Amanda, in that I'm old school and prefer to read paper copies of books, although I do love my Kindle for when I'm on the go and don't know what I want to read. I have books of every genre on my Kindle so I can carry just the one Kindle instead of hundreds of books around! Given the choice, though, with books I really love, I still want a good old fashioned hard copy to hold in my hands :D

I'm intrigued with this idea of a French Knight in Scotland.
sallans d at yahoo dot com

I really like the covers for all three of the books in this series. Gotta love a man in a kilt. How many books will there be in this series?
luvfuzzzeeefaces at yahoo dot com

Great interview. I enjoyed learning about your research process. Thanks for the giveaway.

This is my favorite type of read!!

Hi! Thanks for this chance! I think I follow you on every blogs to get a chance to read your book! I LOVE highlander story!!!

Oh this book sounds really good. I love Scottish men in kilts!
Thanks for the interview and giveaway