Review: A Seal in Wolf's Clothing 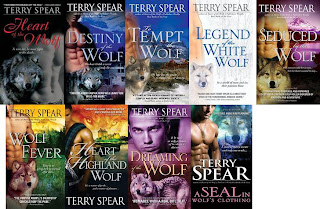 Excerpt from A Wolf in Sheep's Clothing (Amazon Look Inside Feature)


HER INSTINCTS TELL HER HE'S DANGEROUS...


While her overprotective brother's away, Meara Greymere's planning to play - and it wouldn't hurt to find herself a mate in the process. The last thing she needs is one of his SEAL buddies spoiling her fun, even if the guy is the hottest one she's ever seen...


HIS POWERS OF PERSUASION ARE HARDER TO RESIST...


Finn Emerson is a battle-hardened Navy SEAL and alpha wolf. He's a little overqualified for baby-sitting, but feisty Meara is attracting trouble like a magnet...


As the only responsible alpha male in the vicinity, Finn is going to have to protect this intriguing woman from a horde of questionable men, and definitely from himself...

Terry Spear continues her highly acclaimed Heart of the Wolf series with her latest book, A SEAL in Wolf's Clothing. This book is mix of paranormal romance, romantic suspense and military suspense. Spear does a fantastic job of melding the genre's to create a novel that transcends genre boundaries. As usual her characters are multi-faceted and interesting. An all wolf, shapeshifting SEAL unit is quite intriguing and readers will love the romantic tension between the SEAL hero and alpha heroine.

As many of you know this is one of my favorite authors and one of my favorite series'. The books in the Heart of the Wolf series can all be read as stand alone's, but you won't want to, they're too good! A SEAL in Wolf's Clothing is probably one of my favorites for several reasons. I tend to be a fan of romantic suspense, as well as, paranormal romance, and this one combines the two, and adds in military overtones as a bonus. Navy SEAL's are the bomb to start with, the one in this book is shapeshifter to boot. Very sexy!

Spear's characters are always one of the best parts of any of her books and thats the case with this book as well. Meara is looking for a mate. But she has an overprotective alpha male brother, who won't let anyone near her. I liked Meara a lot. She was very determined and had a good head on her shoulders, but she was lonely. She wanted a man who would treat her as an equal and she wanted someone she had real chemistry with. There may have been a tinge of desperation in her actions but not too much. The sexual tension between Meara and SEAL leader, Finn was unmistakable from the beginning. Meara has met her match, but there are a lot of obstacles standing in their way, including a less than supportive brother.

Finn is super-sexy. He just exudes command and dominance. His career choices alone show that he is loyal and understands the meaning of friendship and taking care of those he loves. He relies on himself, but he is also willing to allow his SEAL brothers to help him when he needs it. At first he had this damsel in distress way of looking at Meara that kind of irritated me, but eventually he got past that and realized what a wonderful woman she was. The physical attraction between them started first, which is usually the case in the real world and then their relationship grew out of that. Very well written.

I loved the whole plot. The SEAL team and their families being targeted because of botched mission. I liked how the author used suspense and adventure to really propel this love story. It was interesting to see how all the pieces of the puzzle started to fall into place. Spear has a knack for writing this kind of story and I hope she continues to give her books romantic suspense elements. I think it's something she's really good at. Another thing that Spear does well is describing pack dynamics. She knows what she's talking about when it comes to wolf behavior and she is able to put it to use in her shapeshifting stories.

I can't recommend this one enough. Terry Spear is an author that will remain one of my favorites for a long time I'm sure and I hope she continues this series. There are a lot more stories to tell about these characters and I love how Spear works the next lead characters into her books, so that readers have an idea who to look for in upcoming books. A great addition to a wonderful paranormal series!

A SEAL in Wolf's Clothing is available NOW from your favorite bookseller.

When she's not writing, gardening, or making bears, she's teaching online writing courses. Originally from California, she's lived in eight states and now resides in the heart of Texas.
Posted by justpeachy36 at 11:10 AM