Review and Giveaway: Due or Die

Due or Die (Library Lover's Mystery - Book 2) by Jenn McKinlay 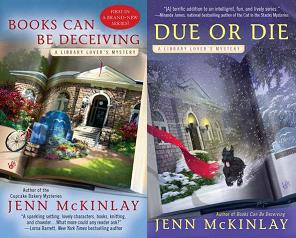 Excerpt from Due or Die (Amazon Look Inside Feature)

What is the original meaning of the word clue? *

Answering trick reference questions like this one is more than enough excitement for library director Lindsay Norris. That is, until another murder is committed in her cozy hometown of Briar Creek. Connecticut, and the questions of who did it must be answered before someone else is checked out - for good.

Carrie Rushton, the president of the Friends of the Library, has been accused of murdering her husband. The evidence is stacking up against Carrie, but neither Lindsay nor the Briar Creek crafternoon club is buying it.

When a nor'easter buries the small coastal town, the police are too busy digging out the locals to investigate the murder. With the help of her crafternoon friends and an abandoned puppy the named Heathcliff, Lindsay has to solve the question of who murdered Mr. Rushton before the killer closes the book on Carrie...


* a ball of yarn or thread

Jenn McKinlay continues her Library Lover's Mystery series, with the second book, Due or Die. McKinlay's enchanting characters and New England coastal town setting make this one of the best up and coming cozy mystery series'. McKinlay is not stranger to the cozy world having seen success with her Cupcake Bakery series, but this one will hit the spot with readers and book lovers, with a librarian lead character and a sidekick straight out of a classic novel.

I've read several Jenn McKinlay books and I'll have to say this one is among my favorites. The Library Lover's series will definitely strike a cord with readers, much like anything involving books usually does. Set in the Briar Creek Library, Due or Die centers heavily on the happening in and about the library and a small coastal New England town in Connecticut. Main character Lindsay is the head librarian and finds herself dealing with all sorts of issues including murder.

Lindsay is one of my fav's. She is very no-nonsense and doesn't pull any punches. What you see is what you get with her and I like that in a person. She doesn't beat around the bush and she runs the library accordingly. When she finds herself in the middle of another murder mystery she takes it in stride and knows that she has to prove her friend Carrie's innocence. I liked the fact that the author shows Lindsay as capable and inquisitive. She gets herself into some typical cozies messes including a nor'easter that threatens to take her out.

One of the best additions to the second book in the series, is the new library puppy, Heathcliff. I loved Wuthering Heights as many people do and I liked the homage to the book, by naming the puppy after the main character. Heathcliff's story reminds me of Dewey the Library cat and I think having a library mascot is a perfect idea. Heathcliff added a lot of comic relief to the story and just one of those comforting little touches that make a book special.

Something that I enjoy about most cozies is the special features provided at the back of the book. Often times if there are recipes in the back, I usually try one or two so I can mention it in my review. This time however, I was still in the office and just didn't have the time, but the recipes look very tasty. There is also a crochet pattern for crafters. A reading group guide for the classic, Wuthering Heights, definitely a nice touch and a preview of the next book in the series. I always enjoy those because it kind of whets the appetite for what's to come.

This is a great series. There are a lot of cool extra features. The characters are a lot of fun to read about and the plot and mystery is somewhat unpredictable where the motive is concerned. Definitely a series for the book lover and the crafter.
Due or Die is available NOW from your favorite bookseller. 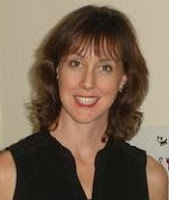 The Publisher is sponsoring a giveaway for one copy of Due or Die by Jenn McKinlay.


~ You must be a GFC follower or E-mail subscriber to participate
~ US addresses only
~ The deadline to enter this giveaway is Midnight EST April 14th.


1. Please leave a comment in appreciation to the author on this post, not the form.
2. Please fill out the FORM.
Posted by justpeachy36 at 9:43 AM

I have this book on my wishlist!

Your review made me want to read this book. It sounds great. (Throw in a dog and I am always hooked.)

i just recently read the 1st book in this series, & look forward to reading Due or Die!!

Jenn, this sounds like a great book, looking forward to reading it.

I am really looking forward to this book! I love the cover too.

Yet another cozy that I have put on my must read list. Thanks for the contest.
suefarrell.farrell@gmail.com

Already on my wish list! The cover reminds me of our wimpy MN winter this year. I do love a good snow storm (one a year is plenty!)
kpbarnett1941[at]aol.com

I haven't discovered this series. Now I'm anxious to do so!

I have the first book in this series and would enjoy the second book as well. Thank you for the chance to win.

fyi: Debbie - we are not able to post your link to facebook again. It says there is a problem with stuff.pyzam.com again.

Having worked in public libraries for many years, I know I'd enjoy this book.
Theresa N
weceno(at)yahoo(dot)com

After reading your review it sounds like something I would enjoy reading. thanks

I've been wanting to try these books with "normal" people solving crimes.

The cover makes me want cocoa! lol
I would love to read it.

This sounds like a great series! I'm looking forward to reading it!