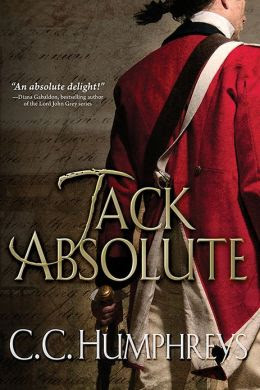 Excerpt from Jack Absolute, courtesy of Amazon (This is from the original version, not the reprint.)

JACK ABSOLUTE RETURNS TO AMERICA!
Yes, he’s back. What the Good Book Guide in the UK called: ‘The finest series of historical novels since Patrick O’Brian’ is published in the USA on May 7th.
Meet the real Jack Absolute – not the comic captain from Sheridan’s play ‘The Rivals’. Meet the Redcoat. The Mohawk. The Lover. The Spy.
OPENING LINE:
“The snow lay deep on Hounslow Heath and the light was fading fast.”
“An absolute delight! Swashbuckling adventure, eighteenth-century wit, hugely entertaining plots, and one of the most appealing military gentlemen ever to wear a sword.” Diana Gabaldon – Author of the Outlander and Lord John Grey series.
It's 1777 when Captain Jack Absolute becomes a sensation throughout London. This news comes as a shock to the real Jack Absolute when he arrives in England after four months at sea. But there's little time for outrage before he finds himself dueling for his life. Right when he thinks he's finally won, he is forced to flee London by the quickest means possible, becoming a spy in the American Revolution. From the streets of London, to the pivotal battle of Saratoga, to a hunt for a double agent in Philadelphia, this novel marks the exhilarating beginning of an epic historical series and a character you won't soon forget.

C.C. Humphreys takes a character he once played on the stage and brings him to vivid life in his novel, Jack Absolute. Readers who love an exciting and daring story, with swashbuckling action and a main character that that is both lover and rogue will find this book irresistible. Humphreys writes with a flair for the dramatic and a great sense of adventure. Readers will find it hard to put this novel down until the last page has been read!

This book is all about the characters. In fact it's really all about the main character, Jack Absolute. Jack has been called the 007 of the 1700's with good reason. Humphreys based this character on a role he once played on stage in a play called, "The Rivals" by Richard Sheridan. He enjoyed playing the character so much that when the opportunity afforded itself in his writing career, he brought Jack back! Jack Absolute is one of those larger-than-life characters that readers will fall in love with instantly. He isn't perfect and gets himself into some desperate situations which makes him all the more entertaining. From London to America Jack Absolute's adventures will thrill readers who like their novels fast paced and full of energy. An unforgettable character, fuels this book and the subsequent series set during the American Revolution.

Humphreys attention to detail is unparalleled in today's historical fiction novels. Down to the smallest of things, the author endeavors to be true to the time period and to the historical accuracy that is expected in good historical fiction. Jack becomes everything from an impersonated soldier to a spy during this novel that is for all intents and purposes a wonderful adventure story. Humphreys excels at both character development and advancing the plot. His story certainly doesn't drag. Jack is a captivating character that readers won't soon forget.

An exhilarating beginning to the Jack Absolute series! Jack Absolute is currently the only novel that is available in the US, but with it's success I am sure the other novels in the series will follow. If you are looking for a book that is thrilling and full of adventure, this is definitely a good historical fiction choice.

C.C. Humphreys is a novelist, fight choreographer, and actor who played Jack Absolute in The Rivals for a six-month run in London in the mid - 1980's. When he became a full-time writer a decade ago, he decided to transform his leading man into a title character. Humphreys has written seven historical novels including, The French Executioner, which was runner-up for the CWA Steel Dagger for Thrillers in 2002. The Jack Absolute series will feature three books: Jack Absolute, The Blooding of Jack Absolute, and Absolute Honour.
Posted by justpeachy36 at 11:25 AM

Wow! What a review! And this book sounds amazing, first time I have heard about it so I am glad you posted a review!!!