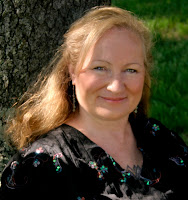 Please join me in welcoming Ashlyn Chase back to Debbie's Book Bag. Ashlyn is here promoting her latest release, How to Date a Dragon. Ashlyn generally writes about all sorts of paranormal characters, so I asked her to write about what started her fascination with them. Enjoy! Check out the end of the post for your chance to win the book directly preceding How to Date a Dragon, Flirting Under a Full Moon, the first book in the Flirting with Fangs series.

What Started my Fascination with Paranormal Characters
Ashlyn Chase

I’m afraid my obsession with all things paranormal goes waaaaaaay back. My mother told me that when I was two years old, I asked Santa for a flying carpet. A real one, like Aladdin had. I don’t think we should hold Walt Disney responsible for the kind of books I write, although he may have helped fire up my imagination.

As a child, my favorite fairy tale was Sleeping Beauty. Think about it. We have royals, a wicked witch and good fairies. All the ingredients of a compelling story.

Maleficent, the evil queen, was hurt, because she wasn’t invited to the party. Everyone was celebrating Aurora’s royal birth but her. Instead of just sucking her thumb and feeling like crap, she acts! Of course, she acts like a jerk, but at least she has the power to make people regret snubbing her. We don’t know why she was snubbed. We assume that if she’s bad enough to cast an evil spell over the entire kingdom, she did more than dance with a lampshade on her head.

She puts a sleeping spell on the royal spinning wheel. Did I become obsessed with spinning yarn or knitting? Nope. It was the magic that caught my attention.

Sure enough, Aurora—the name of the princess better known as Ms. Beauty, found the damn sewing machine that everyone tried to hide from her under a tarp, and pricked her finger on the spindle.

The spell was so powerful the entire kingdom fell asleep for a hundred years. Now that makes the witch exceptional—not in a good way, but at least she wasn’t feeble or ordinary, like most of us powerless shlubs.

The fairies couldn’t stop it. They could only limit the damage. So they added a caveat. If a handsome prince kissed the princess, she would wake up. And, of course, she was soooooooo beautiful, any handsome, charming prince could not help but kiss the gorgeous sixteen-year-old in a coma.

The royals don’t have the power in this story. Nope, ironically, they’re the pawns. It’s the witch and the fairies that call the shots.

I could use my psych degree and analyze this to death. But in actuality, even if I studied every facet of the archetypes and my relationship to them, I doubt that would dampen my enthusiasm for writing extraordinary characters. Of course I want to feel special. Who doesn’t? Of course I want to enjoy some control over my life. Who wouldn’t? And because I’m a writer, I am and I can.


Every day, I decide what sort of ‘magic’ will happen in my fictional world. I may not be able to stop people from killing each other in the Middle East, but if I decide werewolves and vampires should get along, I’ll find a way to make that happen on the page. I may not be able to stop racism, but if I believe love can heal the deepest wounds, I’ll create a love so strong it transcends species. And even though laughter might be rare in this world, I’ll try to add a giggle to someone’s day. See? I’m not such a bad witch.

How to Date a Dragon excerpt: 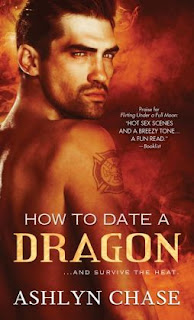 Bliss remembered just in time to put her hand on the door before opening it. It didn’t feel as though there were an inferno on the other side. Staying low, she opened the door. The smoke was so thick she could barely see. She held her breath and charged toward the end of the hall.

Suddenly, her head hit something firm and she fell backward. “Oomph.” The sharp intake of breath resulted in a coughing fit. Looking up to see what she had hit, she realized she had just head-butted a firefighter’s ass.

He swiveled and mumbled through his mask. “Really? I’m here to save you, and you spank me?”

Despite her earlier panic, Bliss felt a whole lot safer and started to giggle. Oh no. My computer! “Wait, I have to go back…”

“No. You need to get out of here, now.” The firefighter lifted her like she weighed nothing—an amazing feat in itself—then carried her the wrong way down the rest of the hallway, through the fire door, and down the stairs.

“Wait!” She grasped him around the neck and tried to see his face through watering eyes. His mask, helmet, and shield covered almost his whole head, but she caught a glimpse of gold eyes and a shock of hair, wheat-colored with yellow streaks, angled across his forehead. She thought it odd that the city would let firefighters dye their hair like rock musicians.

As soon as they’d made it to the street, she could see better and noticed his eyes were actually green and almond shaped. She must have imagined the gold color.

He set her down near the waiting ambulance and pulled off his mask.

What a hottie! But I don’t have time for that now. She staggered slightly as she tried to head back toward the door.

He grabbed her arm to steady her. “Hey,” he shouted to one of the paramedics. “Give her some oxygen.”

“No, I’m fine. I don’t need any medical attention.” Thanks to the gorgeous hunk with the weird hair.

“Please… let them check you out.”

“I’d rather let you check me out.” She covered her mouth and grinned. “Sorry. It must be the smoke inhalation.

He laughed. “Seriously? First you grab my ass, and now you’re hitting on me?”

“I didn’t ‘grab your ass.’ For your information, I ran face-first into your… behind.”

His smile almost stopped her heart—or was it the lack of oxygen? Regardless, she had to rip herself away from him and get her computer out of the building before it melted. No matter how hard she pulled, he didn’t budge. 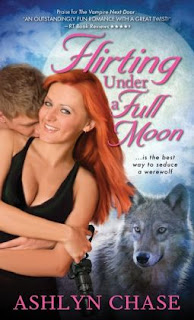 The publisher is sponsoring a giveaway for one copy of the first book in the series, Flirting Under a Full Moon by Ashlyn Chase.

~ You must be an email subscriber to participate.
~ US and Canadian Addresses only.
~ The deadline to enter this giveaway is Midnight EST, November 1st.

1. Please leave a comment describing your favorite dragon character from books or the movies.

2. Please fill out the FORM.

Okay, I'm going back to when I was a kid and it's Puff ;). I'd listen to the song and create him in my head. He was my first dragon love :).

This is a great series. All of Ashlyn's books are fun reads. Check them out - you'll be glad you did.

Great post, Ash. Looking forward to reading this one. :) I agree with you that Disney and other childhood stories sparked a love of the paranormal in a lot of us. I was really bummed when Santa didn't bring me a REAL magic wand.

You're a very good witch! And a fantastic author. I always loved the fairies too, and I believe that romance novels can impact real life and I hope one day it can stop racism.

Most recently I'm taken with the dragons in 'How to Tame Your Dragon' especially Toothless.

Congrats on the new release. It sounds fantastic.
I agree with CrystalGB. Dragos Cuelebre is my favorite dragon. He's just so different with his love, Pia, it's nice to see.

I've read the giveaway book but don't own it. So yes I'd love to win a copy. I love Ashlyn's books and beg my local library to order them so often the librarian dislikes me intensely.

Thanks for your wonderful comments, everyone! Nora, I should send you some bookmarks to appease your librarian. Email me your mailing address and I will. Ash@ashlynchase.com

I love Dragon Heart. I love the dragon. Awesome movie. Thanks for the giveaway. Tore923@aol.com

Dragon Heart for sure! Love Ashlyn's books! Thanks!

the dragon from Shrek

There are so many good dragon books out there these days, with the great popularity of paranormal romance and urban fantasy. But I will probably hearken back to an old favorite, Saphira from Eragon by Christopher Paolini

The dragon in Shrek is my most recent favorite. :)