Review: It Takes Two to Tangle 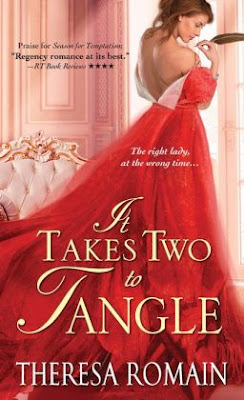 Excerpt from It Takes Two to Tangle, courtesy of


Wooing the Wrong Woman...
Henry Middlebrook is back from fighting Napoleon, ready to re-enter London society where he left it. Wounded and battle weary, he decides that the right wife is all he needs. Selecting the most desirable lady in the ton, Henry turns to her best friend and companion to help him with his suit...
Is a Terrible Mistake...
Young and beautiful, war widow Frances Whittier is no stranger to social intrigue. She finds Henry Middlebrook courageous and manly, unlike the foppish aristocrats she is used to, and is inspired to exercise her considerable wit on his behalf. But she may be too clever for her own good, and Frances discovers that she has set in motion a complicated train of events that's only going to break her own heart...

Theresa Romain begins her Matchmaker trilogy with It Takes Two to Tangle. Set in the Regency period, it is the story a man returned from war with scars both physical and emotional, who believes finding just the right wife will solve all his problems. Romain uses strong characters, witty banter and Cyrano de Bergerac type situation to bring her story to life for readers. With everything from secret letters to a duel, this novel has all the right elements of a great historical romance!

Writing about the ton and the Regency time period is often a challenge for some writers. Theresa Romain, however has done her homework. Her characters, as well as, the customs of the times and the societal rules are all represented well in It Takes Two to Tangle. I found it interesting that the author was able to show why it was so very important for the hero to reclaim is place in society and why the ton was so hard to accept those who faced any kind of adversity. I liked the fact that Romain did not turn her story into a history lesson but was able to add bits and pieces of interesting things about the Regency period without overwhelming the reader.

The heroine Frances was a jewel. She wasn't perfect and had things in her past that caused her pain and embarrassment. She was a war widow and was somewhat resigned to the fact, though she longed for love and appreciation. By not signing her name on the first letter she writes to Henry she sets herself up for a lie. And one lie leads to another and another until Frannie is in deep trouble, when she realizes she is falling in love with a man who thinks she is someone else. I liked her frank manner and her wit. She was sharp and intelligent and readers will find a very interesting character.

Henry is such an interesting character. Not only was he a solider, but also an artist. When a tragic injury takes both of those careers from him, Henry's determination is nothing less than amazing. I got a little sidetracked as to why he believed finding the perfect wife was the answer to all his troubles, but it certainly added to the plot. Henry was like a bulldog, focused, determined and somewhat blind to what was right in front him... but let's face it... most men are! (LOL).

It took a little while for the plot to wind around to where it needed to go for Francis and Henry to find their happy ever after, but I think that was part of the beauty of it. Love doesn't happen overnight, not even in Regency times. I liked the fact that Romain, made it real journey for these characters to get past their own issues. Francis nearly sabotaged the relationship by lying to Henry in the first place and Henry was so blinded by his plan, that he nearly lost the love of his life. They were both really good at getting in their own way. I thought Romain did a fantastic job of working it all out. Including Henry's issues with the lose of his hand.

This novel flows very well. The transitions are smooth and the story was really interesting to me. I liked the whole Cyrano-ish plot device and the duel was amazing. This is definitely a must read for Regency fans and for those who want something a little different. In short... I loved it!

It Takes Two to Tangle is available NOW from your favorite bookseller.

Be sure to check out my interview with Theresa Romain for your chance to win a copy of her book. 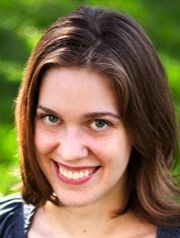 Historical romance author Theresa Romain pursued an impractical education that allowed her to read everything she could get her hands on. She then worked for universities and libraries, where she got to read even more. Eventually she started writing, too. She lives with her family in the Midwest.
Posted by justpeachy36 at 11:00 AM

My now sil "Helped" me to meet my husband. She introduced us and we have been married 31 years.

I like what this reviewer said about the hero and heroine having to work hard through their individual issues to reach their HEA. I think that's the way it should be...that that's what makes a story. If the two main characters of a story didn't have to work through scenarios and issues and problems, there wouldn't be much of a courtship or much of a story! So I appreciate that Theresa has an intricate plot and storyline in this book. It makes the reading worthwhile. Thanks Theresa! jdh2690@gmail.com

I had a friend at work make sure I got to sit next to my now husband at a company baseball game.
suefarrell.farrell@gmail.com