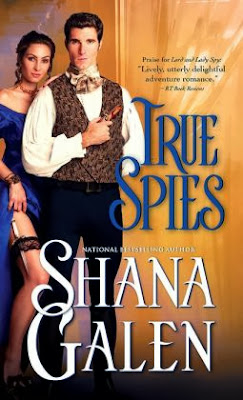 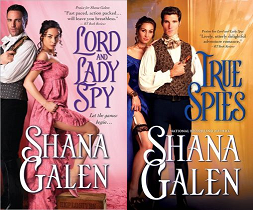 Excerpt from True Spies, courtesy of the author's website.


He's Getting Tired of Deception...
Baron Winslow Keating is honor-bound to finish one last mission as an elite spy for the Barbican group even though he just wants to go home and be with his family. But after years of secrecy and absence, his daughters hardly know him and his wife has given up on him...
She Wants to Try a Little Intrigue...
Lady Elinor has had enough of domestic boredom. She contemplates an affair with a rakish spy, only to discover a world of intrigue and treachery that she never knew existed. Even more shocking, her neglectful husband is suddenly very attentive—quite the jealous type—and apparently there is much more to him than she ever knew...

Shana Galen's second book in the Lord and Lady Spy series, True Spies takes readers on fast paced romp through the ton with espionage and family hanging in the balance for the hero. Galen once again uses humor with a deft hand to give her novel a sense of adventure and fun, while also keeping the romance tender, yet exciting. Readers who enjoy a good second-chance romance will enjoy this novel with a mature married couple, with all the responsibilities of home and career at it's center.

Most romances are the typical boy meets girl, girl plays hard to get, boy chases girl, boy and girl find love and live happily ever after. Shana Galen didn't take the normal route in her latest book and that made all the difference. In True Spies readers will meet a couple who have been married for some time. But the demands of home and family and a clandestine career as a spy are starting to cause their marriage to fray at the edges.

I liked the way Galen was able to show the strain on both of the main characters. How Winn wanted to spend more time with his wife and daughters but felt his work as spy was very important to his county. And how Elinor felt unloved and that her marriage was cold and that she needed more. I thought Galen was able to make a case for both characters and why they were having issues. Though I believe a lot of that could have been solved had hero and heroine had better communication.

I loved Elinor. She was very well written. I am not sure that an affair was perhaps the right course of action to get her husbands attention, but I can certainly sympathize with the disparity she was feeling. Winn's continued absence from her and their children would make one question whether he cared about them. And let's face it, as women, we need to feel like more than just someone's responsibility. I liked the fact that Galen gave Elinor some guts, first she goes a ball alone, a definite no-no according to the ton and then she wears a gown that doesn't leave a lot of the imagination. She had spunk. She also loved her husband and was feeling a bit betrayed. I couldn't necessarily blame her for wanting more out of life.

Winn was an interesting character. I understood his reasons for doing what he did. Being a spy, he had to keep a lot of things under wraps even from his wife. He was very devoted to his work and his country and generally when that happens, something has to suffer. In this case it was his family. When he finally decides it is time to pass the work on to others, so that he can repair the damage he has done in his own life, he is offered one final mission. But is it worth cost? I thought Galen wrote Winn as a thoughtful man, who considered many things and tried to do what he thought was best, but didn't always go about it the right way. He was a good character.

I liked the fact that Galen revisited the villain from the first book and some of the previous characters. She ties the series together nicely and leaves it open ended at the conclusion of the book. The villain is still out there and that sets up book three. I liked all of the intrigue and espionage themes and how the moved the action of the book along. Though this is essentially a romance and that is the heart of the book, I liked the secondary theme of fighting for your country whether on the battlefield or behind the scenes. Very well written. Another great book from this author.

True Spies is available NOW from your favorite bookseller.

SHANA GALEN is the bestselling author of fast-paced adventurous Regency historicals, including the RT Reviewers' Choice The Making of a Gentleman and the Rita-nominated Blackthorne's Bride. A former English teacher in Houston's inner city, Shana now writes full time. She lives with her family in Houston, Texas

Head on over to Romance at Random for your chance to win a copy of True Spies by Shana Galen.
Posted by justpeachy36 at 10:00 AM