Review and Giveaway: Murder of a Stacked Librarian 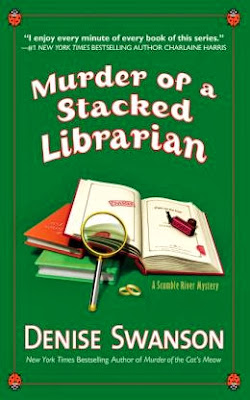 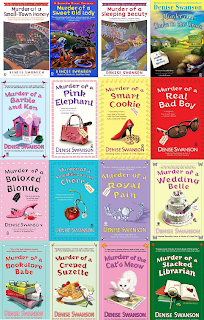 Excerpt from Murder of a Stacked Librarian, courtesy of Amazon's Look Inside feature.


There’s no place like Scumble River at Christmastime, and this year, school psychologist Skye Denison has twice as much to celebrate—and to do. In addition to the usual holiday frenzy, Skye’s wedding to police chief Wally Boyd is less than a week away—that is, if the groom isn’t too busy working to attend. The town’s sexy new librarian, Yvonne Osborn, has just been murdered, and the list of suspects is piling up faster than late fees on an overdue book.
Yvonne’s strict sense of right and wrong annoyed some townspeople and infuriated others. Did her high standards lead to her death? Skye is distracted by worries about what havoc the crazy Dooziers will wreak on her wedding day and whether she’ll fit into her dress. But Skye can’t afford to leave any page unturned because unless she works quickly to expose the scheming killer, her happy ending may be put on permanent hold.…

Denise Swanson juggles, Christmas, a wedding and murder in her latest installment to the Scrumble River mystery series, Murder of a Stacked Librarian. Once again Swanson thrills readers with a sixteenth book about heroine Skye Denison and the townspeople of Scrumble River. This long-lived series has only gotten better with time and readers will find themselves drawn into the big plans for the wedding as well as the murder of the temporary librarian. It's all a question of what's right and what's wrong in this one and readers won't be able to put it down.

Denise Swanson has accomplished one of the hardest things for an author to do. Most authors who write a series that lasts more than five or six books end up like most musicians, when you hear people say, "I really liked their older stuff better." Not so, with the Scrumble River series. It has aged like fine wine and gotten better with each installment. Readers have allowed Skye to become a part of their lives, reveling in her successes and wondering how in the world she's going to get out of this one. They've followed all of her misadventures and her chaotic love life, until now when she is finally ready to settle down, but Skye doesn't go easily...

I loved all the wedding plans and things that Skye was dealing with in this one. She's finally ready to take the next step with Wally, but things keep getting in the way. Like a murder. Not only does she have to plan a wedding, make sure Christmas is just as important as usual, but now she has to figure out who killed the librarian. I liked the fact that Swanson gave Skye so many things to keep her attention, but also allowed her to fulfill each one without sacrificing another. She does't scrimp on the wedding, Christmas is perfect and she has time to reveal the killer. She's quite the amateur sleuth and character and fans of the series love her.

The librarian in this case, Yvonne is a very outspoken woman. She believes in a strict code of right and wrong and isn't afraid to say so. Unfortunately, that didn't sit too well with the inhabitants of Scrumble River and somebody took it a little too personally. There were plenty of clues and a slew of possible suspects. I thought it was really interesting how being too "right" go her killed and Swanson takes that idea to the max and uses it so well here. I liked the mystery aspect of the book and thought it was well plotted.

This is a fast paced book, that will certainly keep your motor running. It's hard to put down from the first page to the last. I hope that Swanson keeps writing about Skye because this series is only getting better!

Murder of a Stacked Librarian is available NOW from your favorite bookseller. 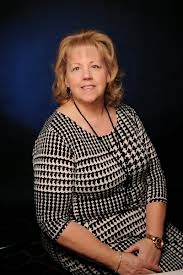 Denise Swanson is the New York Times bestselling author of the Scumble River and Devereaux’s Dime Store mystery series. She worked as a school psychologist for twenty-two years before quitting to write full-time. She lives in Illinois with her husband, classical composer David Stybr, and their cool black cat, Boomerang.

The publisher is sponsoring a giveaway for one copy of Murder of a Stacked Librarian by Denise Swanson.

~ You must be an email subscriber to participate.
~ US Addresses only.
~ The deadline to enter this giveaway is Midnight EST, November 4th.

1. Please leave a comment describing a funny or disastrous wedding story.
2. Please fill out the FORM.
Posted by justpeachy36 at 1:37 PM

All the wedding that I have gone were just beautiful weddings.
CABWNANA1@bellsouth.net

I don't have a funny or disastrous wedding stories. My mom thought my wedding was funny, I guess. She laughed through it.

All the weddings that I've attended have been just lovely, including two that were held outdoors - and the weather co-operated!
kpbarnett1941[at]aol.com

My brother in-law fainted at the altar. It wasn't funny at the time.

Oh Debbie, I must have double clicked and now can't get the extra comment deleted!

The funniest thing I have ever seen at a Wedding was the couple were holding hands and kept swinging them the whole time during the ceremony.

My niece got married in a little park. 2/3rds thru it, it started to sprinkle, by the time it finished, it was raining and we were running.

At my brothers wedding , the brides veil caught fire from one of the candles. No one was hurt luckily. My brothers swatting at it to outten it.Then at my sons wedding , the flower girl ripped the whole underside of her dress out walking up the aisle and was dragging it along side of her. And one of the bridesmaid almost fainted it was horrible hot that day and no air conditioning

At my first wedding, we couldn't decide on what kind of cake to have---so we had 2--his was white and traditional, mine blue and green and a carrot cake. That probably said it all about the success of our marriage.
suefarrell.farrell@gmail.com

A wedding which I enjoyed and thought was lovely was the bride and groom skipping down the aisle after the ceremony. saubleb(at)gmail(dot)com

When my niece got married a year or so ago, when the ceremony concluded the entire wedding party put on sunglasses and danced out of the church to the song "What i Like About You". It was fun and memorable!

My brother in law and his new bride had pies at their wedding instead of cake. Very memorable indeed!
JHolden955(at)gmail(dot)com

My own wedding was probably considered funny and a disaster. I was so nervous that I laughed uncontrollably through out the whole ceremony. The best part was no one got upset with me, they just laughed along with me including the preacher.
ayancey1974(at)gmail(dot)com

I have only been to 2 weddings, and they were both pretty routine. Nothing funny or out of the ordinary happened, just pretty ceremonies.

I have read the first book in the series and am on the second.