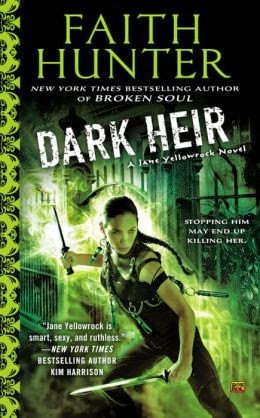 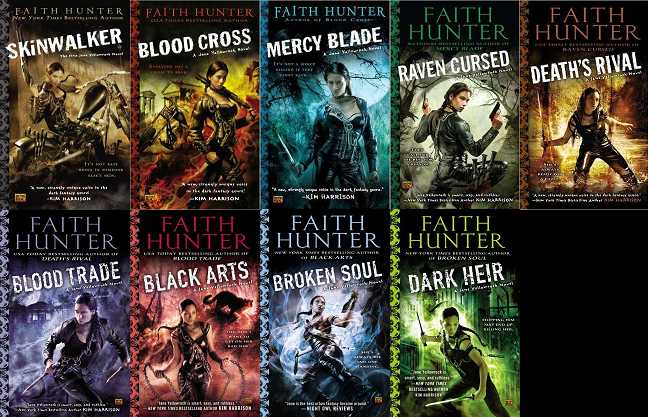 Excerpt from, Dark Heir, courtesy of Amazon's Look Inside feature

Shapeshifting skinwalker Jane Yellowrock is the best in the business when it comes to slaying vampires. But her latest fanged foe may be above her pay grade…For centuries, the extremely powerful and ruthless vampire witches of the European Council have wandered the Earth, controlling governments, fostering war, creating political conflict, and often leaving absolute destruction in their wake. One of the strongest of them is set to create some havoc in the city of New Orleans, and it’s definitely personal.Jane is tasked with tracking him down. With the help of a tech wiz and an ex-Army ranger, her partners in Yellowrock Securities, she’ll have to put everything on the line, and hope it’s enough. Things are about to get real hard in the Big Easy.

Faith Hunter returns with her ninth book in the Jane Yellowrock series, Dark Heir. Jane and her partners at Yellowrock Security are up against their most dangerous foe yet. The Son of Darkness has escaped Leo's basement and he is about the reek havoc on New Orleans. Hunter once again shows readers what it takes to make a series thrive, with super intense action, multi-faceted lead and secondary characters and an ever changing plot, this book rocks! Readers get a little bit of humor, a taste of romance and most importantly one kick-butt heroine. A great addition to the series!

Jane Yellowrock is probably one of my favorite paranormal heroines. She's a shapeshifter, a Cherokee and a vampire hunter. What a combination! It means that as a character she is one tough cookie. But in Dark Heir, Faith Hunter gives readers a different side of Jane. With the addition of a love interest, readers see a Jane that is a little softer a little more vulnerable and dare I say, a little bit sweet. Jane is still the same renegade readers have loved since the beginning of the story, but this adds another layer to her character that is very intriguing.

Jane is up against the baddest of the bad in this installment of the series, the Son of Darkness and he has a bone to pick with her. Of all the things in Leo's basement, this one might be the scariest. An older than dirt vampire on a rampage. This is probably one of Hunter's best baddies so far. One of the things I particularly like about this series... never the same bad guy and this one is unique and simply maniacal. I loved the intensity this villain brought to the story.

Another thing I loved about Dark Heir was the evolution of Jane's relationship with Beast. From the beginning of the series, Jane has fought with Beast, essentially fighting herself at every turn. In this book she is more centered, more in tune with that part of herself. She has accepted her dual nature and learned to live with it. I think that's what allowed her to let Bruiser in and allow him to become a part of her life. That touch of romance was unexpected and amazing!

If you love this series, you will love this book. If this is your first book in the series, it will leave you thirsting for the first eight. This is a well written, intensely action packed book, that will make you rethink what you know about this series. One of the best so far from Faith Hunter.

Dark Heir is available NOW from your favorite bookseller.

Faith Hunter, urban fantasy writer, was born in Louisiana and raised all over the south. Hunter fell in love with reading in fifth grade, and best loved SciFi, fantasy, and gothic mystery. She decided to become a writer in high school, when a teacher told her she had talent. Now, she writes full-time (about 50 hours a week) tries to keep house, and is a workaholic with a passion for travel, jewelry making, white-water kayaking, and writing. She and her husband love to RV, traveling with their dogs to whitewater rivers all over the Southeast.
The dark urban fantasy Skinwalker series, featuring Jane Yellowrock is composed of Skinwalker, Blood Cross, Mercy Blade, the compilation e-book Cat Tales, Raven Cursed, the compilation e-books Have Stakes Will Travel, Death's Rival, Blood Trade, the Jane Yelloworck World Companion, Black Arts, and Broken Soul.
Faith Hunter is the New York Times bestselling author of the Jane Yellowrock Novels, including Broken Soul, Black Arts, Blood Trade and Death's Rival, as well as the Rogue Mage novels, including Bloodring, Seraphs and Host.