Review: A Good Rake is Hard to Find 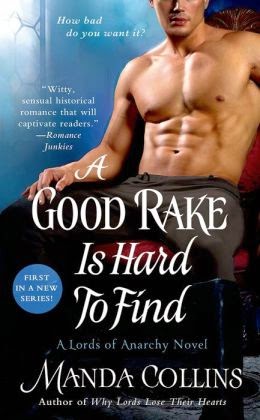 Excerpt from A Good Rake is Hard to Find, courtesy of the author's website.

A DANGEROUS GAME
Heartbroken by the loss of her brother, Miss Leonora Craven vows to uncover the truth about his "accident," which seems to have been anything but. Jonathan Craven was involved with the Lords of Anarchy, a notorious driving club, and Leonora can't help but suspect foul play. But the only way she can infiltrate their reckless inner circle is to enlist the help of Jonny's closest ally, Lord Frederick Lisle. If only he didn't also happen to be the man who broke Leonora's heart…
AN UNDENIABLE DESIRE
Frederick isn't surprised to find gorgeous, headstrong Leonora playing detective, but he knows that the Lords of Anarchy mean business--and he has no choice but to protect her. A sham engagement to Leonora will allow Frederick to bring her into the club and along for the ride. But it isn't long before pretending to be lovers leads to very real passion. With everything to lose, is their tempestuous affair worth the risk?

Manda Collins brings readers the first book in a new series. A Good Rake is Hard to Find is the first book in the Lord's of Anarchy series featuring a maniacal driving club that is up to more than just carriage races and pranks. Collins shows a lot of potential in this first book, with both romance and mystery at it's center. Her characters are captivating and the mystery of Jonathon's death is riveting. If readers are looking for a different face of the ton, this might just be the book for them!

This was my first book by Manda Collins and I always love it when it happens to be the first book in a series. I am a series reader! I like books that tie together and share the same world and I think Collins sets up the Lords of Anarchy series very well here. Most usually in historical romance writing the ton has a particular set of rules and regulations as to how the characters act and are perceived. There is some dallying with mistresses and gambling and the like but you don't usually see the underbelly of the society. I liked the fact that the Lords of Anarchy series is showing a more of the sinister side of the ton. Readers know it existed, but they get a real look into it in this series. Original and engaging!

Lenora Craven's brother is dead. Most likely at the hands of this driving club, the Lords of Anarchy. Lenora doesn't believe it was just a carriage accident and she sets out to prove it. Lenora was an interesting character. She had strong opinions and was a real feminist at heart. I thought she had guts and a spine which is more than a lot of Regency female characters get. She was determined, even when it meant spending time with her former fiancee. I liked her spunky and attitude. She was a take charge character and I thought Collins did a wonderful job with her.

Fredrick was a little harder for me to understand. I realize that he was hurt when Lenora dropped him like a hot potato in the past and that he was Jonathon's best friend. He has been gone for five years but he slides right back into the game when he returns. I liked the fact that he was determined to get Lenora back and find out what went wrong between them. I also understood his need to find out what happened to his friend. But as a character he didn't quite grip me the way Lenora did. He was at times a little flat and hard to read, even though Collins was writing him as the hero. He was a still a good hero, but he lacked a little when it came down to it. It was a good romance, but it focused more on the mystery side of things.

Collins knows how to write a villain. This guy was the kind that makes you want to wring your hands and wonder why these kinds of people exist. He was down right evil. The things that the Lords of Anarchy were involved in were things you would expect from the dregs of society not the elite. Good stuff and very well written. I'm interested to see how the concept carries through to more books in the series. A lot of potential here.

The whole premise of this romance was tied up in the story of Jonathon's death. It was impossible to separate the two ideas. That was good and bad. I felt like the book was a little lope-sided. The mystery kind of takes over at times and the romance becomes more of a sideline story. That's not to say that I didn't like it. It was a wonderful read. Lenora was a dream of a character and the concept of the Lords of Anarchy was indeed very intriguing and wonderfully written. The hero fell a little flat for me but there so much potential for this series that it hardly seemed to matter. A great first book!

A Good Rake is Hard to Find is available NOW from your favorite bookseller.

Manda Collins spent her teen years wishing she'd been born a couple of centuries earlier, preferably in the English countryside. Time travel being what it is, she resigned herself to life with electricity and indoor plumbing, and read lots of books. When she's not writing, she's helping other people use books, as an academic librarian.
Posted by justpeachy36 at 10:00 AM

Looks good! I like to start a new series when it begins too.