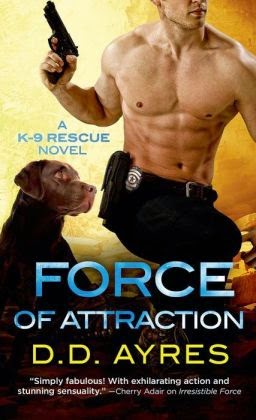 Coverart: Click on the image for a larger, clearer view of the covers in this series 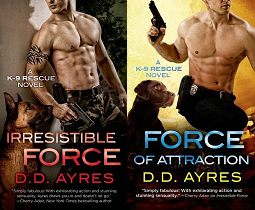 Excerpt from Force of Attraction, courtesy of Amazon's Look Inside feature

"Incredible! You'll be on the edge of your seat?to see if the heroine can make it out alive."--Catherine Coulter, New York Times bestselling author on Irresistible Force

The only thing more powerful than fear is desire…

A seasoned K-9 officer with the police in Maryland, Cole Jamison has left her old life behind her. With a new home and a new partner--a protective canine named Hugo--Cole is ready for fresh challenges. A crucial position on an important drug task force is exactly what she wants…until she discovers her gorgeous, infuriating ex-husband will be the DEA agent in charge.

Agent Scott Lucca may be a pro when it comes to undercover assignments, but this job is daunting even for him. Posing as a happy couple on the dog competition circuit means he and Cole need to get a lot closer than they've been in years. Playing a live-in couple should seem like a walk in the park compared to tracking a brutal criminal, but suddenly nothing could be more dangerous than the passionate fire they've rekindled...

Do you love dogs? How about second chance romances? If so... then D.D. Ayres' new book, Force of Attraction will be right up your alley. Force of Attraction is the second book in the K-9 Rescue series. Ayres is a pro at writing romantic suspense. Her stories will have you sitting on the edge of your seat and smiling from ear to ear. There is a good balance between action and romance in this novel as well as fully developed characters, even the canine ones! A great addition to the series.

D.D Ayres must love dogs. Her non-human characters are always exceptional. I loved Hugo in this one and thought Ayres did a wonderful job of bringing him to life. He doesn't have any magical powers but he is still a superhero. I think Ayres had a really good idea using canines in this romantic suspense series. I think they are an integral part of a lot of police departments and it's nice to see them get a leading role in a series.

Cole was a strong woman. I liked her from the very first page. She changed her life, got a new job, even a new nickname. Not something that comes easy to anyone. When she is suddenly thrust back into the past, working with her ex-husband, she shows a lot of strength of character and I thought Ayres wrote her perfectly. It's never a walk in park giving someone a second chance. Cole didn't take the easy way out and walk away. She laid her heart back on the line with someone who had hurt her badly before... now that's a different kind of courage.

I liked Scott too. He is the kind of character that makes you redefine your definition of hero. This is a guy who gave up everything including his marriage to serve and protect. Undercover work is probably really difficult and easy to get lost in. I liked the fact that Ayres shows us that this hero wasn't perfect, he was real. His feelings for Cole never wavered and I was so glad that she gave him a second chance to do it right. Great character. Great chemistry.

The action in this one was superb. I was practically biting my nails. He bad guy was really bad. He had this eeriness about him that make the hair on the back of my neck stand up... LOL. Now that's a villain. The balance between the romance and action was excellent. I think there was just enough of each part to keep this book from being pretentious or seeming contrived.Nicely done!

If you are a romantic suspense fan and love dogs, this just might the perfect series for you. The action and the romance are well balanced and I the thought Ayres did a great job with these characters. Hugo was a favorite of mine and I thought the dog show angle was interesting and fun. This was just a good story that I think a lot of romance and suspense fans will love.

Force of Attraction is available NOW from your favorite bookseller.

D. D. Ayres loves men in uniforms and dogs, making the K-9 Rescue Novel Series with St. Martin's Press a dream come true. She currently lives in Texas where she's at work on her next novel.
Posted by justpeachy36 at 9:00 AM