Choosing to SEE: A Journey of Struggle and Hope by Mary Beth Chapman, With Ellen Vaughn
(For review from Revell)
Synopsis:
"I've told my kids for years that God doesn't make mistakes," writes Mary Beth Chapman, wife of Grammy award winning recording artist, Steven Curtis Chapman. "Would I believe now, when my whole world as I knew it came to an end?"
Covering her courtship and marriage to Steven Curtis Chapman, struggles for emotional balance, and living with grief, Mary Beth's story is our story -- wondering where God is when the worst happens. In Choosing to SEE, she shows how she wrestles with God even as she has allowed Him to write her story-- both during times of happiness and those of tragedy. Readers will hear first hand about the loss of her daughter, the struggle to heal, and the unexpected path God has placed her on. Even as difficult as life can be, Mary Beth Chapman chooses to SEE
Thoughts:
This book is a really stirring memoir of Mary Beth Chapman, the wife of Contemporary Christian music artist, Steven Curtis Chapman. I have been a fan of Steven Curtis Chapman's music for many years and I have always been moved by how he expresses his faith through his music. Never more so than after the death of his adopted daughter, Maria in 2008. But, I was initially very uninformed about his wife. I didn't know a lot about her and never really considered who she was as a person, only that she was Steven Curtis Chapman's wife. In this memoir I found so many things that I could relate to Mary Beth in and so many things that makes her stand out as person devoted to God even when tragedy strikes. It takes a strong woman to come through something like that with her faith in God intact.
One of the things that I found interesting was that Mary Beth never really wanted to be a recording artist's wife. She wanted a quiet and orderly life. A home in the suburbs, a husband with a 9 to 5 job. But, God had other plans. Not only was her life filled with the hectic pace of a husband on the road, and three children of their own, but He also choose to lead them to adopt three daughters from China that would forever change Mary Beth's life. I'm not sure I would have been able to see beyond my own dreams to what God really had in store for me. Mary Beth chose to SEE what God was up to and embraced it.
There was so much happiness in Mary Beth's and Steven Curtis life, that it's hard to imagine the sadness at the death of their daughter Maria. Not only was the accident tragic, but for them it was even more heart wrenching because of the circumstances. Maria was killed when she was hit by a car in the driveway of their home, driven by her own brother, Will. She was five years old. Mary Beth had to deal with the loss of her child and the horrific grief and guilt that her son was feeling. I'm not so sure I would have been able to lay aside my own grief as well as she was able to do in order to SEE what God needed from me at such a point.
It was wonderful to see what God is doing in memory of their special little girl. Maria's Big House of Hope is located in a very poor area of China and serves the many orphans of that community. In Maria's honor, Maria's Big House of Hope is helping other orphaned children find homes and most of all love. Sometimes we don't understand why God chooses to do things the way He does, but Mary Beth shows us through this book, that if we choose to SEE, we can know that he doesn't make mistakes and everything happens for a reason, even if we can't understand what it is at the time. 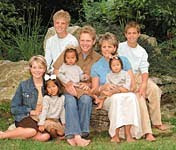 I loved the book. It was heart wrenching, yet filled with great love and joy as well. Grief is something that is hard to describe, and even harder to live, but this book is as much about moving on as it is about anything. What happens after something tragic changes your life? This is a book about hope and what hope means. It was truly inspirational.
Available September 2010 at your favorite bookseller from Revell, a division of Baker Publishing Group.
I'm giving this one 5 out of 5 apples from my book bag!

Here is some additional information about Mary Beth Chapman and Ellen Vaughn. 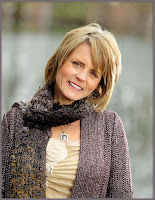 Mary Beth Chapman is the wife of Grammy and Dove award winning recording artist, Steven Curtis Chapman. Together they began Show Hope, a nonprofit organization dedicated to caring for the worlds forgotten and abandoned children by providing financial assistance to families wishing to adopt, as well as increasing awareness of and funneling resources to orphans domestically and internationally. Mary Beth serves as president of Show Hope and is a speaker for Women of Faith 2010 with her husband. She is also co-author with Steven of the Shaoey and Dot series of children's picture books. Mary Beth and Steven have six children, Emily (24), Caleb (20), Will Franklin (19), and adopted daughters Shaohannah Hope (10) and Stevey Joy (7) and Maria Sue, who is now with Jesus. The Chapman's live in Tennessee.

Ellen Vaughn is a New York Times bestselling author and inspirational speaker. Her recent books include, It's All About Him, which debuted at #1 on the New York Times nonfiction list. In addition to her nonfiction work, Vaughn is an award winning novelist. Vaughn and her husband Lee live in the Washington DC area.
Posted by justpeachy36 at 6:27 AM