Radiant Daughter by Patricia Grossman
(For review from Ollie Media)
Synopsis from Publisher's Weekly:
Grossman (Brian in Three Seasons) pursues the erratic coming-of-age gifted daughter of a family of second-generation Czech immigrants living outside of Chicago. In 1969, 18-year old Elise Blazek, scholarly and haughty, gets both accepted into Princeton and apprehended for vandalism, revealing a contradictory, troubled nature that confounds her pushy, ambitious mother Irena. Elise can't wait to get out of her stifling suburban home where she also endures the distracted diffidence of her father, Stephen, a mild-mannered architecture draftsman, and younger cousin, Miloslav, a crack baseball pitcher dealing with his own tragedy. Over the course of 27 years, the novel traces Elise's gradual spiraling into mental illness and Irena's fixed denial: from Elise's decision to study Russian literature, grating on her mothers hereditary resentment; her abrupt and unceremonious marriage to her Russian language graduate professor; diagnosis of manic depression manifested by episodes of hearing the voice of poet Anna Akhmatova; to dismissal from her university. Ultimately, Irena rallies around her daughter with a fierce maternal sympathy, offering a fragile closure to this unsentimental story of one family's gossamer dreams.
Thoughts:
This was an interesting book. The author delved into many different themes in the book, but still held it all together in a very cohesive way. The main themes in the book dealt with the mother daughter relationship between Elise and her mother, Irena and the integration of their Czech ancestry into the lives of their children born in America. The theme of mental illness and depression is also very prominent in the book. Grossman follows this family through 27 years, which is remarkable. Most contemporary fiction novels do not tackle that big of an expanse of time.
Elise, the main character was a very dramatic young woman, who has a lot of issues. Not only is she gifted and very intelligent, but she is charismatic and unpredictable. There are times when Elise seems very lucid and able to do the things she has dreamed of, but then the depression takes over and she becomes someone else entirely. She feels extreme pressure to represent her family and to do what is expected of her by her mother. Irena has very specific ideas of how shes wants Elise's life to be. Elise is torn between what she feels she needs to do and what others want from her. This book gives insight into how a person can be so desperate that it effects everything in their life.
The mother-daughter bond between Elise and Irena seems to be strained to the utmost. But, in the end Irena finally faces the fact that Elise cannot be what she dreamed she would be. She needs her and she must show Elise that no matter what happens she loves her. The book may sound a bit depressing in itself, but it definitely shows a lot of hope as well. Irena's changed attitude really impacts the reader and will make them think of the bonds between them and their own parents.
Elise also fights with the stereo types and ideas associated with immigrants. Her family is stuck between the ideas of their own Czech heritage and how things are so very different for the children who have been born in America. Irena is beside herself when Elise decides to study Russian literature. She wants something different for her children but she is unable to let go of the heritage she was born with and the ideas of how things need to be. It's interesting to watch the struggle and the reader will wonder which form of idealism will win out.
Radiant Daughter is available NOW from your favorite bookseller.
I'm giving this one 4 out of 5 apples. There are some pretty heavy themes in this book and readers will become engrossed in figuring out what is going to happen to this family next!

Here is some additional information about Patricia Grossman. 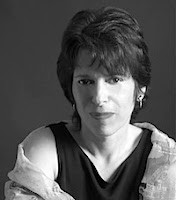 Patricia Grossman was raised in suburban Cleveland and moved to New York City at the age of 18 to study drawing and painting at the Pratt Institute. Her lifelong love of the visual arts is often reflected in her fiction. After graduating from Pratt, Grossman acquired an MFA in fiction writing from Sarah Lawrence College, where she studied with E.L. Doctorow and Grace Paley. Grossman lives in Brooklyn, New York.
Posted by justpeachy36 at 10:56 AM

I haven't heard of this, but I find it fascinating. Books about female characters in depression are kind of an obsession with me. Thanks for bringing this to my attention.