WHEN IT COMES TO LOVE, ONE THING'S FOR SURE - IT DOESN'T FOLLOW A SCRIPT!

Athena Pappas is the head writer on Stars Collide one of the most popular sitcoms in television history. But when Vegas comedian Stephen Cosse is brought in to beef up the show's suddenly sagging ratings, she starts to worry about her job. Sparks fly as the competition - and attraction - between the two writers heats up. Athena has never had a problem writing the romances of her characters. So why is her own love life so hard to script?


With humor and a Hollywood-insider viewpoint, Hello, Hollywood! delivers lots of laughs as Athena and Stephen discover that not being in control of the plot of their lives might just be the best thing that ever happened to them.


If you're looking for contemporary romance with a Christian spin, look no further than author Janice Thompson. Thompson's latest book, Hello, Hollywood is the second book in her Backstage Pass series, that centers around the television sitcom, Stars Collide. Thompson is a veteran romance author and has behind the scenes experience as a screenwriter which lends a realistic, authentic feel to this novel. Readers will appreciate Thompson's ability to add humor, as well as, inspiration to her writing. With expressive and personable characters, a very Hollywood attitude, and lots of fun, Hello, Hollywood is a great romantic comedy.


I first became interested in the writing of Janice Thompson when I reviewed her book, Swinging on a Star from the Weddings by Bella series. One of the things that I find most enchanting about her books is the sheer amount of humor that she adds to very situation. If a reader is looking for a romance that is both clean and light, Thompson's books are among the best. In her latest, Hello, Hollywood humor abounds. The main protagonist, Athena is a write for the television sitcom, Stars Collide, which in and of itself provides a great avenue for adding funny situations and circumstances, but Athena's life itself gives the reader a very light-hearted look at love.

Sometimes in our own lives I think we get hung up on the heavy parts of relationships. Thompson reminds us that it's okay to have a good time, everything doesn't have to be so dramatic. Her characters portray that idea throughout this novel. When Athena meets comedian Stephen Cosse she isn't expecting him to tickle her funny bone and make her heart sing, so it's an amazing kind of relationship that readers will enjoy reading about and wishing they had one like it. Some may consider Thompson's writing a little over-the-top or pretentious, but I like all the biggness, the exaggerated circumstances and when you add in the Christian perspective, what's not to like?

I think readers will really fall in love with the cast and characters centered around Stars Collide. They are a bunch of people thrown together that may not have ever found each other otherwise and I think that's the beauty of it. Athena is smart, professional and has a great outlook on life. Stephen is a great addition to the show and to Athena's life. He looks at the world with a glint of humor in his eye. I always find myself loving characters who are genuine and feel like someone you might meet on the street. Thompson pulls that off with this series as she does with most of her books. The characters drive the story to where she wants it to go and the reader is along for a great ride.

I recommend this one to Christian Fiction readers and contemporary romance fans. Thompson's writing is fun, clean and has it's priorities in the right order. If you are looking for a book that will get you laughing and then make you think a little bit, this is it. Great for a long weekend or curled up in front of roaring fire. Grab a blanket, a cup-o-joe and you'll be all set.

Available October 2011 at your favorite bookseller from Revell, a division of Baker Publishing Group. 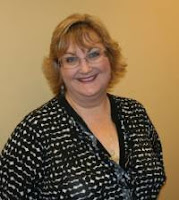 Janice Thompson is a seasoned romance author and former screenwriter. An expert at pulling humor from the situations we get ourselves into, Thompson affords an inside look at TV land, drawing on her experiences as a screenwriter. She is the author of the Weddings by Bella series and Stars Collide. She lives in Texas.
Posted by justpeachy36 at 11:52 AM

Woo-hoo! So glad you enjoyed Athena's story. Thanks so much for the sweet review!

I enjoyed the Bella stories too, and look forward to checking out this series as well!

This sounds like a great book, I enjoyed reading your review! =)

Thanks for stopping by Janice, I loved your book!

Melissa and holdenj this is a great new series by Janice, you'll definitely have to check it out.