He could be her own personal, Prince Charming if only dreams did come true...


Mysterious, handsome wizard Aethelstan Blackstone hires beautiful, hardworking attorney Nora Barr to get a restraining order to protect Sleeping Beauty from her evil stepmother. But if Sleeping Beauty is supposed to be his soul mate, than how come he's becoming bewitched by Nora?


And when Nora finds herself baby-sitting a clueless maiden from the middle ages, avoiding a very wicked witch, and falling hard for a man whose magic she doesn't believe in, she begins to think that love itself is noly a fairy tale.


Welcome to the fractious fairy tale world of Kristine Garyson, where the bumpy road to happily ever after is paved with surprises.


Utterly Charming by Kristine Grayson is a novel where magic and the real world collide. This fractured fairy-tale has more twists and turns than a maze and will delight readers who are looking for a short, romantic happily-ever-after. With engaging characters, and a "charming" premise, this book is sure to be a hit with mainstream contemporary romance fans, as well as, paranormal enthusiasts.

Fairy-tale re-tellings have become very popular of late and Kristine Grayson's take on Sleeping Beauty is both unique and full of surprises. The main idea of the book is that Sleeping Beauty's, Prince Charming left her sleeping for a long, long time and when she awakes, she is resentful and not feeling exactly loving toward him. Alex wants to take care of Emma, but is that enough to base a life-time on? Especially, when he is having feeling for another woman. Nora, the lawyer Alex hires to help him protect Emma from the evil witch, is attractive and no-nonsense and he finds himself attracted to her intelligence and forthright attitude. So does he stay with the woman he has always intended to be with or the woman who reaches him on a level that one else ever has?

Main characters Alex and Nora have a very complicated dynamic. Grayson spends a great deal of this book, bringing readers up to speed on what has happened between Emma and Alex and the evil witch. How Alex has managed to get himself into trouble and how his relationship with Emma has significantly changed. Once that part is out of the way, Grayson begins to allow Nora to take center stage in the book. Though Alex is still a main character it is Nora who will capture the mind and hearts of the audience.

Nora is a young woman who has been dealt a rough hand, yet she has persevered and stood her ground. She doesn't let anyone intimidate her, including magical beings and angry witches. Nora can seem very opinionated and somewhat uncompromising, but I think Grayson was attempted to show her more as a strong woman than anything else and readers will sympathize and become enchanted by Nora as her character begins to face the possibility that happy-ever-after might just be real.


Grayson's other characters in Utterly Charming are versatile and add a lot of variety to the story. Alex's friend Sancho is one of the best. Sancho is both comical and resourceful. He adds a great deal of comic relief to the book and readers will find themselves giggling frequently at his antics. As far as villains go, Ealhswith is interesting, but under appreciated. She comes across as more annoying than evil. The other characters in the book know what expect from her and aren't too frightened anymore. I liked her, but felt she came up a little shy on the potential that she had.


This is a short book, at just over 300 pages and I felt that Nora and Alex's relationship did not have the necessary time to develop like I would have hoped but it was still a light, humorous read. It can be read in a sitting or two and I definitely like the way that Grayson changes the fairy tale and gives it a contemporary feel. This isn't your Grandma's Sleeping Beauty! I recommend it to both mainstream romance readers and those that like their happy ending with a dose of magic added in.


Utterly Charming is available NOW from your favorite bookseller. 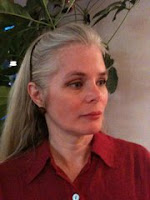 Before turning to romance writing, award-winning author Kristine Kathryn Rusch edited for the Magazine of Fantasy & Science Fiction and ran Pulphouse Publishing (which won her a World Fantasy Award). As Kristine Grayson she has published six novels so far and has won the Romantic Times Reviewers Choice Award for Best Paranormal romance, and, under her real name, Kristine Kathryn Rusch, the prestigious Hugo award. She lives in Oregon with her own Prince Charming, writer Dean Wesley Smith (who is not old enough to be one of the original three, but he is handsome enough) as well as the obligatory writers' cats.
Posted by justpeachy36 at 8:00 AM