The Popularity Rules by Abby McDonald

Excerpt from The Popularity Rules

If you dont do it some other girl will.

Kat Elliot has spent her life fighting against phony schmoozing - and it's led her nowhere. A rebellious music journalist, Kat is down on her dreams when her ex-best friend Lauren swishes back into town. Ten years ago, Lauren dumped Kat for high school gold: popularity. Now Lauren wants to make amends by teaching Kat the secret to her success: the Popularity Rules, a decades-old rule book that transformed Lauren that fateful summer.

Broke and desperate, Kat reluctantly agrees to a total makeover - only to find that the in-crowd may hold the key to what she wanted all along. But can old betrayals ever be forgiven? And can Kat really accept that popularity is the only prize that counts?

The Popularity Rules by British author Abby McDonald is an experiment into the world of the in crowd and what it takes to be a part of it. Heroine Kat Elliot quickly learns that being a writer in the cutthroat world of music journalism isn't always what it's cracked up to be. Down on her luck and in need of something to believe in she takes up an old friend up on the possibility of changing her life, in every conceivable way. McDonald offers readers an often sarcastic but humorous look at how the other half lives. Would you be willing to throw out every idea and creed you believed in to be a part of the crowd? Is popularity the most important factor in being successful in all area's of life? Or is it only a means to an end... Being popular doesn't always mean being happy.

McDonald hits on a subject that strikes at the heart of young women in just about every culture. Popularity vs. idealism. Can you be popular and still stand up for what you believe in. I thought the author did an amazing job of showing the reader the kind of dedication, preparation and overall headache that goes into being the "it" girl, so to speak. Even after Kat completely changes her clothing and hair style, she learns that popularity is more about how you are perceived by others as opposed to how you see yourself. I'm not a proponent of holding what other people think about me in high esteem, but I did understand where the author was coming from.

From my own experience as a young girl and even after reaching adulthood, like most girls I had this idea that I could go home for the summer or start a new job and be a completely different person if I wanted to, so I loved the overall premise of this book, it is so completely authentic. Re-inventing oneself may not be easy but it's a fantasy that I think most woman have and some throw caution to the wind and actually do it. Kat becomes so downtrodden and desperate that readers will begin to identify with her and want her to succeed in getting her job back, finding the man of her dreams and rekindling the long lost friendship she shares with Lauren. Kat is a very realistic character that has to decide what is most important to her, and whether or not the popularity rules fits in with her aspirations.

Kat may be the lead character in this one but she has some very interesting counterparts. Lauren is a great character. McDonald writes her as somewhat mysterious and aloof. She wanted so desperately to not be on the fringe anymore that she was willing to give up everything including her friendship with Kat. Readers will see how much Lauren has had to give up and ultimately why she made such a drastic choice. Oscar and Gabi are loads of fun and certainly add to the comic relief in the book and draws tension away from the main characters, but it is Ash that steals the secondary character show. He is a passionate music producer and he finds something in Kat that she doesn't even see in herself. He carries his passion over into every part of his life and that makes him such a meaningful hero.

Readers of contemporary women's fiction will find this one interesting on a lot of levels. Being a music industry writer myself, I really loved the angle that McDonald uses to bring about Kat's transformation. Anyone who has ever been on the outside looking in with empathize with Kat and love her sassy spirit and caviler attitude. The author ties everything together and pulls off a happy ending for Kat and her esteemed entourage. I liked the fact that the reader is left wondering what is going to happen until the very end. There are several twists and turns in this one to keep the interest high and readers will find it well worth the time it takes to read this one at over 400 pages. Great chick lit, with a hint of romance!

The Popularity Rules is available NOW from your favorite bookseller. 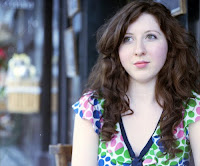 Twenty-six-year old Abby McDonald grew up in Sussex, England, and studied politics, philosophy, and economics at Oxford University. She began writing at college, becoming music editor of The Oxford Student and completing her first novel. She has since worked as a music journalist and entertainment critic, interviewing acts as diverse as LeAnn Rimes, The Kings of Leon, and Marilyn Manson. Her writing has appeared in NME, Plan B magazine, CosmoGirl!, and variety of websites and blogs. In March 2009, her debut novel for teens, Sophomore Switch, was published by Candlewick Press. The Popularity Rules is her first novel for adults. She is also the author of The Liberation of Alice Love.
Posted by justpeachy36 at 10:00 AM