Darcy is acting rather oddly: After months of courting Elizabeth Bennet, no offer of marriage is forthcoming and Elizabeth is first impatient, then increasingly frightened. For there is no denying that the full moon seems to be affecting his behavior, and Elizabeth's love is going to be tested in ways she never dreamed...

Darcy has more than family pride to protect: others of his kind are being hunted all over England and a member of Darcy's pack is facing a crisis in Scotland. It will take all of Elizabeth's faith, courage, and ingenuity to overcome her prejudice and join Darcy in a Regency world she never knew existed.

Mary Lydon Simonsen effortlessly blends the iconic characters of Jane Austen's Pride and Prejudice with the ever popular supernatural beings of the paranormal world, in her latest release, Mr. Darcy's Bite. Simonsen is no stranger to Austen's Regency world, but this book is a departure from her normal Austen inspired writing. Taking on the world of vampires and werewolves is often not easy, since these kinds of characters tend to overwhelm most stories, but Simonsen is able to balance the romantic world of Darcy and Elizabeth against this magical realm with confidence and ease.


Darcy is considered by many to be the ultimate hero in romantic fiction. Once confronted with his weaknesses Darcy transforms himself into a man whose loyalty and protective nature are legendary. In Simonsen's latest offering Mr. Darcy has a problem, he is drawn to Elizabeth Bennet despite his inner misgivings about his condition. His transformation in this book is both literal and figurative. But Darcy is still Darcy. Even in his werewolf form he is a leader, with a commanding presence. He looks after those in this care with the same diligence and love we expect from him. Instead of making Darcy into a monster, Simonsen stays true Austen's original portrayal of him, which I thought was what really allowed the paranormal element to work.


The overall premise of the book is that Elizabeth and Darcy are facing a huge obstacle in their lives, but true love is able to win out. I think Simonsen did a fantastic job of using the paranormal part of the story to enhance the romance instead of take it over. Darcy's werewolf is just as passionate as his human self and there is an added element of sensuality that isn't present in Austen's work, but has become synonymous with Simonsen's writing. I think too many romance writers today spell out too much. Simonsen leaves enough to the imagination to give the reader something to think about. She also uses a fair amount of humor in the playful dialogue between Darcy and Elizabeth and I believe readers will pick up on it and enjoy the exchanges between them.


Simonsen has created a paranormal version of Pride and Prejudice that remains true to the love between between the two characters while adding a new dimension to the story. I recommend this one to both Austen inspired fiction fans and romance lovers. Simonsen adds just enough of both elements to balance both worlds and still provide a riveting and emotional book. I think readers will still find much of the Darcy they love, while finding new parts of his personality to like as well. Elizabeth is still the intelligent and impertinent woman readers know and love, but she is more willing to accept that life is not always as it seems. A great blend of romance with a paranormal twist!

Mr. Darcy's Bite is available NOW from your favorite bookseller. 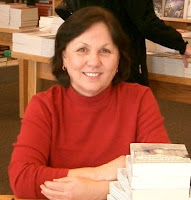 Mary Lydon Simonsen, the author of Searching for Pemberley, The Perfect Bride for Mr. Darcy, Anne Elliot, A New Beginning, and The Second Date, Love Italian-American Style, has combined her love of history and the novels of Jane Austen in her third story inspired by Pride and Prejudice. The author lives in Arizona.

Deb, Thanks for the great review. You made my day.!

Loved the book, Mary! Thanx for stopping by.

Sounds like a fun book, thanks for the review!

Darcy as a werewolf? Can't wait to read this!

Hi everyone. Thanks for joining Deb and me.

Just Peachy, so glad you liked the book. :)