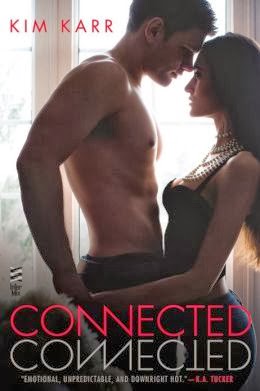 Excerpt from, Connected, courtesy of Amazon's Look Inside feature.

What if a “Once in a Lifetime” could happen twice?

In Dahlia London’s world, happily ever after is a far cry from reality. Her soul has been left completely shattered by tragedy. But a surprising reunion with someone from her past is about to give her a reason to love again…

When rock star River Wilde comes back into Dahlia’s life, their super-charged connection runs deeper than either of them ever expected. The more time they spend together, the more intense their relationship becomes, and Dahlia believes at last she has found her soul mate.

But as old bonds fade and Dahlia’s grief begins to lift, her guilt and confusion remain. River desperately wants to be the one who mends what’s been broken—but with a past that refuses to stay buried, is it possible for their future to begin?

The first book in Kim Karr's Connections series, Connected features the romance of of young woman whose life is marred by tragedy and a rock star she has a connection with. Karr throws readers head first into Dahlia's life and the life of rock star River Wilde. Every girls dream to meet and fall for a rock star. If readers are looking for a book that ties everything up in a neat little package, this isn't it. If readers are looking for a book featuring a soulful connection between two people from two different walks of life, this is it.

I knew going into reading this book that I might have an issue with it. I don't think this happens very often, if ever in real life. How many rock stars even have the time to talk to someone off the street so to speak, not many if any. So I was bound and determined that this book would an unrealistic read at best and one I probably wouldn't like. I would have to say that Karr really changed my opinion of what I thought rock star romances were all about. She gives readers a couple that have this uncanny relationship. They just get each other. They are so soulful and right for each other that the reader can easily forget that they probably would never meet in the real world. It just doesn't even matter.

River was certainly not your average hero. He has a few moments where he lets it go to his head a little bit... who wouldn't? He could have any woman he wants, but when he meets Dahlia, it's all over. She ruined for anyone else. They have this instant vibe between them. It's like they are held in this bubble and the world keeps on going around them, but they are somehow suspended in time. Dahlia knows she can't act on these feelings because she has someone and she really does love Ben in a sense it just isn't the same with River.

Years later they meet again. Dahlia has suffered some pretty profound tragedy by this time and River only wants to take the pain away. The way that he gives her the time she needs to grieve would make anyone's heart flutter. Rock stars are cast as materialistic and superficial, well somebody forgot to tell this character, because he is anything but... Karr does such a great job of making this connection apparent to everyone who comes in contact with these two characters. They were made for each other, no doubt about it.

I kept waiting for the conflict. For that thing that happens to drive them apart. I had no idea this one ended in a cliffhanger until the end and I was basically stunned by how quickly things take turn. Karr certainly wasn't scared off by the fact that some readers don't like cliffhangers. I will admit that I am one of those readers. But this one might have changed my mind a little bit. The cliffhanger made sense, there I said it. I thought the cliffhanger actually worked in this case and it totally made me want to jump into the second book.

I still have issues with the rock star meets regular girl theme, but I was able to suspend that attitude for this book, because Kim Karr was able to make me believe it could work if you have the right connection. Most readers are thinking... I want to connect with a rock star! LOL.

This a really special relationship. These characters will speak to anyone who thinks love at first sight is possible. That there is just one true love for each person in the world. It's perfect for those readers who know, that connections that are unexplained happen every day. A great read!

Connected is available NOW from your favorite bookseller. 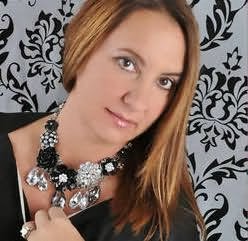 Kim Karr lives in Florida with her husband and four kids. She’s always had a love for books and recently decided to embrace one of her biggest passions—writing.  Connected is her first novel and the first in her Connected series, followed by Torn.

The publisher is sponsoring a giveaway for one copy of Connected by Kim Karr.

~ You must be an email subscriber to participate.
~ US addresses only.
~ The deadline to enter this giveaway is Midnight EST, March 14th.

1. Please leave a comment about what you think of rock stars or celebrities as the main characters in romances?
2. Please fill out the FORM.
Posted by justpeachy36 at 11:30 AM

I perfer the characters to be made up otherwise, you put them in the catagory of memoires.

Well, I've tended to shy away from these stories! I just think it's kind of unbelievable to think of a rock star with a regular person. Thanks for the chance to win this one, it does look good.

I would love to try this story even tho I dont read many with celebrity characters.

I prefer regular characters but would love to try this one.

Rock stars or celebrities as main characters is ok, but I would prefer they be just regular people. Thanks for having the giveaway.

I really dont read many celebrity romance but do enjoy Nashville.

I would love to try this book even though I don't read many musical/hollywood type characters,

That would be a new reading element for me!

I've read a several books with rock stars or movie stars and really liked them. I am sure they are no where near reality but they were fun!