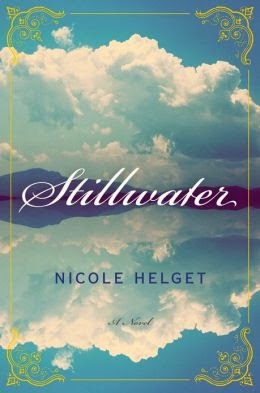 (Received for an honest review from Houghton Mifflin Harcourt)

Excerpt from, Stillwater, courtesy of Amazon's Look Inside feature.

Clement and Angel are fraternal twins separated at birth; they grow up in the same small, frontier logging town of Stillwater, Minnesota. Clement was left at the orphanage. Angel was adopted by the town’s richest couple, but is marked and threatened by her mother’s mental illness. They rarely meet, but Clement knows if he is truly in need, Angel will come to save him.

Stillwater, near the Mississippi River and Canada, becomes an important stop on the Underground Railroad. As Clement and Angel grow up and the country marches to war, their lives are changed by many battles for freedom and by losses in the struggle for independence, large and small.
Stillwater reveals the hardscrabble lives of pioneers, nuns, squaws, fur trappers, loggers, runaway slaves and freedmen, outlaws and people of conscience, all seeking a better, freer, more prosperous future. It is a novel about mothers, about siblings, about the ways in which we must take care of one another and let go of one another. And it’s brought to us in Nicole Helget’s winning, gorgeous prose.

Stillwater is the latest novel from author Nicole Helget. Set in the Northwoods of Minnesota this is a novel that reads like a poem with spectacular prose and clarity that is rare in this type of novel. Readers who are looking to experience a book, as much as read it, will fall in love with this novel. There are two distinct themes in this book, motherhood in all of it's various forms, good and evil and freedom which ultimately comes in the same shapes. A wonderful tale set during a traumatic time in our nations history. Helget has written a novel that requires heart, soul and imagination!

Wow! What didn't I like? Being a fan of historical fiction I was excited to read this story from Nicole Helget. I was fortunate to have read her novel, The Turtle Catcher, so I knew to expect the beautiful wording and style in that is unique to the author. She is truly a wordsmith. Sometimes an author has this uncommon talent for knowing which words fit together to form not only good sentences but beautiful ones as well and Helget is one of those rare few.

I also enjoyed the fact that Helget stays true to herself and her heritage by continuing to write stories set in her home state of Minnesota. I first became enamored with the Northwoods of Minnesota by reading Little House in the Big Woods by Laura Ingalls Wilder and I thought a lot about how both writers described the area and how things were done during these two very different time periods. I loved the setting and thought Helget did a fantastic job with it.

The town of Stillwater takes on the characteristics of an actual character in the story, so strong is it's connection to the entire book. There are many things going on in this town during this seething and changing time in American history. Helget writes with passion about the Underground Railroad, the Native American influences, as well as, that of the trappers and the missionaries. So many different kinds of forces all culminating in this one little logging town. What an incredible story!

This book is about freedom. But not just freedom from slavery but freedom from many things and Helget is ever conscious of this in her writing. The theme of motherhood also resonates throughout the book, as the author traces the many 'mothers' that both Angel and Clement have during their lifetime. And how each mother impacted their lives. Freedom and motherhood may not ring in the readers mind as synonymous until they've read this book, but after they will be reminded of how the two fit together forever.

I loved how Helget was also able to use humor with the character of Beaver Jean. It hard not to chuckle at his antics and how he impacted the story. But there were a few characters that may leave the reader hanging, because there is no resolution as to why they were in the book or what happens to them in the end. The book focuses on the journey of self discovery for Angel and Clement and skims a bit over the secondary characters. But that's almost forgivable when you look at how good the rest of the story is.

Stillwater is available NOW from your favorite bookseller.

Born in 1976, NICOLE LEA HELGET grew up on a farm in southern Minnesota, a childhood and place she drew on in the writing of her memoir, The Summer of Ordinary Ways. She received her BA and an MFA in creative writing from Minnesota State University, Mankato. Based on the novel’s first chapter, NPR’s Scott Simon awarded The Turtle Catcher the Tamarack Prize from Minnesota Monthly.