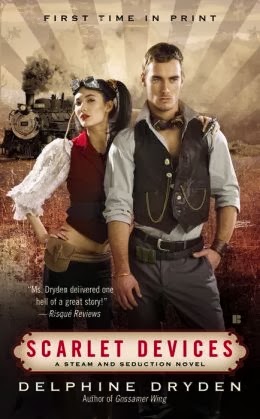 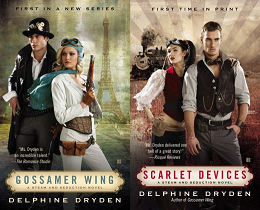 Excerpt from, Scarlet Devices, courtesy of Amazon's Look Inside feature.


DRIVEN TO WIN.
DRAWN TO LOVE.

Fresh from university, Eliza Hardison is determined to crusade for workers’ rights until her cousin Dexter, the Makesmith Baron, prevails on her to represent Hardison House in the American Dominion Sky and Steam Rally.

The competition is fierce, but only one opponent really matters to Eliza. Dexter’s protégé, Matthew Pence, was always like a big brother to her. But now she’s grown up, and Matthew has made a break from Hardison House with his own business venture—and made his own entry in the rally.

Matthew intends to win while keeping Eliza safe on the perilous route from New York to San Francisco. As the threats escalate through treacherous skies and uncharted American wilds, though, Eliza and Matthew must work together, discovering a bond deeper than either could have imagined…but is winning the rally more important than winning at love?

Delphine Dryden's latest book in the Steam and Seduction series is all about the steam. Scarlet Devices is a Steampunk romance, with steam powered flying machines, steam powered cars and some steamy love scenes. Dryden sets her story during the Victorian era, in an alternative world where the United States is called The Dominion. The world Dryden has created is just similar enough to our own to ground readers and draw them into the adventure of the Sky and Steam Rally, a transcontinental race which leave Eliza and Matthew with plenty of questions and some serious steamy tension!

Not everyone is familiar with Steampunk and some of you may be wondering about what that essentially means. The Urban Dictionary defines it this way:

Steampunk is a subgenre of speculative fiction, usually set in an anachronistic Victorian or quasi-Victorian alternate history setting. It could be described by the slogan "What the past would look like if the future had happened sooner." It includes fiction with science fiction, fantasy or horror themes.


I have been reading steampunk since it's inception and I have always really liked it. Some authors do it justice and make it interesting and a cross between historical fiction and science fiction and others just sort of try, but don't quite succeed. Delphine Dryden succeeds... and how! Scarlet Devices is the second book in her Steam and Seduction series. I liked just about everything about this book. From the beautiful cover to the preview of the next book in the series, Gilded Lily. Dryden has created a world that is not unlike our own during the Victorian Era, but there are of course some major differences.

The world building for this series is quite elaborate and my take a little bit of concentration to figure out, but once you understand the logistics of steampunk it all falls into place. I loved the fact that Dryden chose a sky race as the setting for this novel. The American Dominion Sky and Steam Rally features companies who are attempting to be the winner in a transcontinental race from New York to San Francisco. But there are also some other underlying issues at hand. Several people have 'gone west' in the months leading up to the rally and have never been heard from again. The roles of women are still rigid and unbending during this time period. The Temperance Movement is gearing up and rights for workers is at the forefront.

This is the backdrop for a very interesting love story. Eliza is just finishing college and she is dead set on making a change in the world. I liked her tenacity and her attitude. When her cousin suggests she might see a bit of the world if she enters the Sky and Steam rally it seems like just the opportunity to make a change in her life. Unfortunately, Dexter asks his friend Matthew to watch over her during the race. Matthew thinks it very inappropriate for her to race at all and it's on from there. Eliza and Matthew have a history and he has always come across as dismissive and uncomplimentary where she is concerned. These two make quite a pair and once they get over their issues with each other, sparks of a different kind start to fly.

I thought Dryden did an amazing job with character development in this book. Eliza starts out as bright eyed innocent, but soon learns that the world she lives in isn't quite at simple as it seems. Matthew starts out with some very clear ideas on what he believes a woman's role is, but in the end he realizes Eliza's worth and becomes her biggest supporter. I thought the author was able to make the changes in the characters realistic and believable. It was a wonderful part of the book.

This book was filled adventure, after adventure as the race across the country heats up. Eliza and Matthew learn a lot about each other and even more about themselves. I loved the secondary characters and I am glad that Barnabas' story will continue in the next book in the series. The drama was interesting and showed the resourcefulness of the characters and certainly provided a lot of conflict. It was all very well done.

Matthew's disapproving nature in the beginning of the book was a little hard to digest. I am glad that the author chose to make him see the light toward the second two thirds of the book. He was a bit too abrasive for me in the start and I wondered if she would be able to redeem him... I shouldn't have worried.

This is a great steampunk romance and demonstrated to me why I like this sub-genre so much. Dryden uses the steampunk elements with a deft hand and allows the romance to take center stage. I loved the Sky race theme and I felt like this book ratcheted up the tension for the series as a whole. Looking forward to the next one.

Scarlet Devices is available NOW from your favorite bookseller. 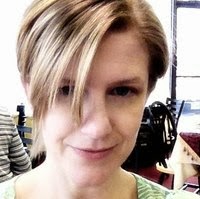 Delphine Dryden tried unsuccessfully to get past being an English major by becoming a lawyer, a special education teacher, and an educational diagnostician. She finally gave up the fight several years ago and began writing full-time. When not writing or doing “mommy stuff,” Delphine reads voraciously and noodles around with web design. She counts herself fortunate to have two absurdly precocious children, and two delightful, if occasionally disobedient, mutts. Delphine and her family are all Texas natives, and reside in unapologetic suburban bliss near Houston.

The publisher is sponsoring a giveaway for one copy of Scarlet Devices by Delphine Dryden.

~ You must be an email subscriber to participate.
~ US addresses only.
~ The deadline to enter this giveaway is Midnight EST,  March 12th.

1. Please leave a comment letting me know if you've tried the Steampunk sub-genre before and what you think of it.
2. Please fill out the FORM.
Posted by justpeachy36 at 10:30 AM

I haven't tried any yet, but I would love to.
Thanks for the chance to win!

I haven't read Steampunk but I've seen Wild Wild West and Sucker Punch. I enjoyed both movies.
Thanks for the giveaway.

I haven't read any, yet, but I'm very intrigued by it.

I have not read any Steampunk books yet, but it sure sounds interesting. Thanks for having the giveaway.

I am a huge fan of steam punk. I love the gadgets, atmosphere and alternate history of it. I am so happy more authors are venturing into it. I have heard so many great things about this book and have been eager to read it.

I have not read a steampunk book yet. I really want to just haven't figured out which one to start with.

haven't really tried it yet

I haven't read any yet. I have heard that they are good.

I've recently read the Artifact Hunters series by A.W. Exley and just loved it! That's the only steampunk I've read, and i loved the mysteries weaved into the stories. This series sounds really good!