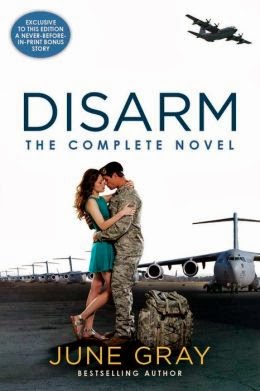 WARNING: The content of this excerpt and the book may be inappropriate for readers under the age of 18 years of age.

Excerpt from, Disarm The Complete Novel, courtesy of Amazon's Look Inside feature.

When the secrets of the past begin to surface, the truth can be disarming…
Twenty-six-year-old Elsie Sherman has had a crush on her brother’s best friend, Henry Logan, since she was twelve years old. Unfortunately, Henry—now an Air Force officer—has only ever treated her like a younger sister, stepping into her brother’s shoes after he was killed in action.That is, until the night when one dance ignites a sensual fire between the two, leaving Elsie aroused and confused. Is she allowed to lust after her surrogate big brother, who also happens to be her roommate? As the passion between them crosses the line into a territory that teases with the forbidden, Elsie decides to give herself to the man she has always desired. But Elsie is not prepared for where the relationship will take her.Henry has been harboring two secrets. One can bring them closer together. The other will tear them apart. Now, with each startling new revelation, Elsie realizes that only she can decide if the past can ever be forgiven—and if a future with Henry is worth fighting for.Includes a never-before-published bonus short story.

I'm not often a fan of serials, because I am usually very impatient to find out if my favorite characters end up together or if a particular situation resolves in the way I thought it would. But I will have to say that reading a serial that has been put into a complete novel is a totally different experience. I still get to experience all of the highs and lows and intense situations and feelings, but I don't have to wait for the climax. I liked that fact that each part of the serial had a different name and it was easy to tell where the breaks in the story were and how I would have felt had I not been able to read the rest at that point. I liked the format a lot and I think it really worked for this particular story very well.

Elsie has been in love with Henry practically all her life. But there were obstacles to their relationship even from the beginning. Henry was Jason's best friend. Her brother meant the world to her and Henry only thought of her as his best friend's little sister. Or so she thought. I liked the fact that Elsie didn't let her life pass her by because of her crush on Henry, but she also didn't give up on the hope that one day things might be different. I enjoyed the fact that through out the book, she kept that hint of love in the back of her mind of him, even as he took over the role of a surrogate brother when Jason is killed in combat. It was like the romance was lying dormant between them until the time was right. A very realistic rendering of how the heart works.

Henry was a piece of work. He was a great friend to both Jason and Elsie and he wanted to protect her when he knew Jason no longer could. Now the two of them are roommates and things are a bit more complicated. I loved the fact that they had been friends for so long. They really knew each other, or they thought they did. Henry is a bit closed off as a character, he has a lot of issues within himself that he needs to sort out. Issues with survivor's guilt, issues with feeling worthy of love and Elsie stands by him throughout it all. She even lets him go when she wants nothing more than to hold him close.

It is a very intense romance, with a lot of emotional upheavals. I think more so because of the way it was originally written. The author had to create a conflict for each individual part of the story and that meant a lot more shaking up of things than in a normal novel. The struggles that Henry had within himself created a lot of the necessary conflict that carried the story and Elsie stands as the stopgap, the port in the storm. The military aspects of the book were well written and had a lot of depth as well. Gray does an excellent job of showing the reader how a military family copes with the hard questions. What if my love one doesn't return? What if he or she is fundamentally different when they do come back?

There were parts that made me emotionally exhausted as I read this one. So much was going on inside both characters. Gray obviously wanted to show readers the depth of emotions both good and bad and she pulls it off beautifully. Both characters grow so much throughout this one. Disarm is just a very emotional read that might be too much for some readers who are looking for a fluffy, happy, romance, but it was just right for me.

Disarm The Complete Novel is available NOW from your favorite bookseller.

June Gray is a daydreamer who, at the age of ten, penned a short story inspired by a Judy Blume novel and has been unable to stop writing since. She loves to tell stories that titillate and enrage, that break the reader’s heart and put it back together again.Her fairy-tale life has been lived on four different continents—most recently, in a two-hundred-forty-year-old castle in rural Germany owned by a Graf. She was born in the Philippines, raised in Australia, and now calls the United States home, and she can currently be found enjoying the shores of Miami with her husband, two daughters, and a miniature schnauzer.

The publisher is sponsoring a giveaway for one copy of Disarm The Complete Novel by June Gray.

~ You must be an email subscriber to participate.
~ US addresses only.
~ The deadline to enter this giveaway is Midnight EST, March 7th.

1. Please leave a comment describing how you feel about serials or if you like it all together. LOL.
2. Please fill out the FORM.
Posted by justpeachy36 at 10:30 AM

Sounds interesting. I'm not the biggest fan of serials either.

I usually like the content of serials but not the format. I like to read the entire book at once so I prefer to wait until all parts are available so I can read it together. In fact I usually wait until at least two or three books in a series are available before even starting them because I get so impatient.

I love series - it's fun to get an update on characters as we go thru the series.

I love serials. I always look forward to the next one.

I am not really a big fan of serials. If I get to read some but miss other books, I will feel so lost and lose interest.

Not a fan of them

I don't like serials; if I read a book I want to finish the story.