Review: Much Ado About Jack 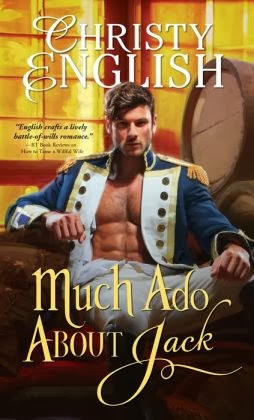 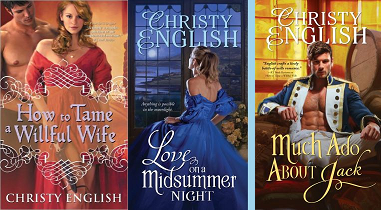 Excerpt from, Much Ado About Jack, courtesy of Amazon's Look Inside feature.


How to Become London's Most Notorious Widow:
1. Vow to NEVER remarry
2. Own a ship and become fabulously wealthy
3. Wear the latest risqué fashions in your signature color
4. Do NOT have a liaison at the Prince Regent's palace with a naval captain whose broad shoulders and green eyes make you forget Rule #1
Angelique Beauchamp, the widowed Countess of Devonshire, has been twice burned by love, and she is certain that no man will ever touch her heart again. But that doesn't mean she can't indulge a little—and it would be hard to find a more perfect dalliance than one with the dashing Captain James Montgomery.
After a brief torrid affair, James tries to forget Angelique and his undeniable thirst for more. The luscious lady was quite clear that their liaison was temporary. But for the first time, the lure of the sea isn't powerful enough to keep him away...

Christy English continues her Shakespeare in Love series, with her latest book, Much Ado About Jack. A historical romance series with a nod to one of the greats is reason enough to read this book, but English also gives readers an adventurous love story between a Widow who has no wish to wed and a sea captain who wants to find something or someone that has a greater pull than the sea. Fans of the series know that English, once a Shakespearean actress, uses her experience with the work of the bard to temper her stories. She has a knack for taking Shakespeare and making it her own!

Shakespeare is one of my all time favorites and any series, no matter the genre that pays homage to Shakespeare's work is worth the time to read in my book. The first two books in this series were very good reads and I thought that English had a real grasp of the Regency world and what made readers want to read about it, but I think she has really outdone herself with this novel. Much Ado About Jack has all the right qualities that make stand apart from others in the genre. Strong characters, a simple, yet intriguing plot and strong romantic chemistry.

Angelique was a heroine with some spunk. She was a confident woman, who knew what she wanted out of life and what she didn't want and in this case that was another husband. Being a widow in the ton provided her with the independence she craved, the wealth to do as she pleased and the opportunity to engage in romance without entanglements. Giving that up was not in the plan. I loved her. She was snarky and sassy and knew how to put a man in his place. She understood the rules of the ton and how to play the game well. She didn't mind being the one they all talked about, she reveled in it. My kind of girl.

James was a wonderful hero as well. A sea captain by trade, is not often known to stay long on the shore. The lure of the sea was often to great to keep them bound to the land and you could see that in his character. He had a sense of restlessness about him and an air of command that was undeniable. When he met Angelique he had certainly met his match. It would take a strong man to love a woman like that, and James fit the bill.

I loved the banter between these two characters and the struggle for control which ensued. She was use to being in command and so was he. I think she treated him with disdain and aloofness partly because she knew he could be her downfall. I loved the way that English allows the reader to be spectator in this battle of wills. The ending was perfect for the two of them and I thought English was able to make everything flow naturally, no one had to give up anything they didn't want to and it felt like a win-win all the way around for characters and readers alike.

This one has spicy moments to be sure and I think it was important that those times be organic and not forced. English knows how to bring the heat without overwhelming the reader. She proves that good love scenes don't have to be raunchy to grab the reader and not let go. I appreciated her use of language and description throughout the book, but it really was showcased in the interactions between Angelique and James whether in the bedroom or out.

Angelique was really mean to James in the beginning. I understood the reasons for that, but still thought perhaps the author could have lightened up a bit on him. James was a great character and took it all in stride. it probably even made him want her more.

This is an excellent series and great nod to one of literature's most celebrated authors. English does justice to Shakespeare and provides readers with a captivating love story between two very strong personalities. I look forward to English's next offering.

Much Ado About Jack is available NOW from your favorite bookseller. 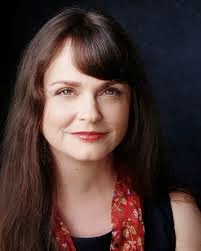 After years of acting in Shakespeare's plays, Christy English is excited to bring the Bard to Regency England. When she isn't acting, roller skating, or chasing the Muse, Christy writes historical novels from her home in North Carolina. Please visit her at www.ChristyEnglish.com