Review: Beneath the Thirteen Moons

Beneath the Thirteen Moons by Kathryne Kennedy

(Received for review from Sourcebooks)

HE'S A RULER IN A DIVIDED WORLD...

In a magical watery world of the Sea Forest, the divide between the rules and the people is an uncrossable chasm. Handsome, arrogant prince Korl Com'nder has lived a life of luxury that is nothing more than a fantasy to the people he rules. Until the day he is accidentally kidnapped by a beautiful outlaw smuggler and is forced to open his eyes to the world outside his palace walls.

SHE'S AN OUTCAST, BUT AT LEAST SHE HAS HER INDEPENDENCE...

Mahri Zin would stop at nothing to save her village, and when they needed a healer she didn't think twice about kidnapping one. But when she realizes that the healer she so impulsively stole is none other than the crown prince of the Sea Forest. Mahari knows that she has a chance to change the fate of her people...

Beneath the Thirteen Moons is a re-issue of one of Kathryne Kennedy's early novels. With a beautiful cover, lush scenery and lots of romantic heat, Beneath the Thirteen Moons is an excellent book. Kennedy has amazing world building skills and the Sea Forest is no exception. A watery world, where the only thing on the surface is giant trees that sustain the people. A society that is governed by those who keep knowledge of all things from the people. It was an exciting book with lots of underlying themes.

Mahari Zin is a smuggler, an independent woman who can take of herself, a Wilding and possibly the savior of her people. When Mahari villages is stricken with a plague, she is forced to make a decision that will change not only her life, but her world as well. She decides to kidnap a healer to try to save them and inadvertently kidnaps the prince of the Sea Forest, Korl. Korl and Mahari are inexplicably drawn to each other, but Mahari has always been independent since the loss of her husband and child and Korl has always been a prince. But, he begins to see the lives of his people in a different light as he and Mahari try to save her village. In the end he learns a lot more about what true freedom is than he ever believed.

Kathryne Kennedy is able to show readers a whole new world that they probably have never even imagined. Her world building skills are without parallel. I have always found fantasy somewhat daunting, but reading Kathryne Kennedy's books have really changed my opinion of the genre. She has a knack for creating a world that I can visualize in my mind's eye. She also develops her characters in such a way that readers will be able to identify with them easily.

Mahari is a strong independent woman, yet she has a major flaw, she is unwilling to show any vulnerability. She doesn't want to risk her heart a second time. She is a character that could be in a fantasy novel or someone you could meet on the street, very identifiable. Korl is the strong, masculine leader. But one who has never experienced what his subjects are really facing. Yet he is willing to learn to see, to change. I loved both characters as well as the supporting cast of the novel.

I would definitely recommend this book to fantasy lovers, as well as romance fans and those who want to try the fantasy genre. I think this book will appeal to a lot of different kinds of readers, with different tastes. The underlying theme of what true freedom is all about, comes through in a very profound way and the author does an excellent job of showing both sides of the coin.

Beneath the Thirteen Moons is available NOW from your favorite bookseller. 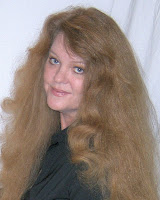 Kathryne Kennedy is a multi-published award-winning author of magical romances. She's live in Guam, Okinawa, and several states in the U.S., and currently lives in Arizona with her wonderful family - which includes two very tiny Chihuahuas.
Posted by justpeachy36 at 10:36 AM

Thanks for your thoughts - I just ended up grabbing this one...

I'll delve into it over the holidays...