Review: Once in a Full Moon

Once in a Full Moon by Ellen Schreiber

(Received for review from Harper Collins Children's via NetGalley)

Beware of a kiss under the full moon. It will change your life forever.

Celeste Parker is used to hearing scary stories about werewolves - Legend's Run is famous for them. She's used to everything in the small town until Brandon Maddox moves to Legend's Run and Celeste finds herself immediately drawn to the handsome new student. But when, after an unnerving visit with a psychic, she encounters a pack of wolves and gorgeous, enigmatic Brandon, she must discover whether his transformation is more than legend or just a trick of the shadows in the moonlight.

Her best friends may never forgive her if she gives up her perfect boyfriend, Nash, for Brandon, who's from the wrong side of town. But she can't deny her attraction or the strong pull he has on her. Brandon may be Celeste's hero, or he may be the most dangerous creature she could encounter in the woods of Legend's Run.

Psychic predictions, generations-old secrets, a town divided, and the possibility of falling in love with a hot and heroic werewolf are the perfect formula for what happens... once in a full moon.

Bestselling author, Ellen Schreiber has taken a break from vampires to give us the first novel in a new werewolf series, Once in a Full Moon. With the onslaught of paranormal books about vampires and werewolves it's hard to make a decision about which ones you want to read and which ones you want to pass on by. If the gorgeous cover on this one doesn't pull you in the first novel in this series shows a lot of potential for what's to come.

Celeste Parker has lived her whole life in Legend's Run. Legend's Run is known for it's past and the werewolves who inhabited it, with stories and tales that all the kids know. But, no werewolves have been around in a very long time, that is until now. Brandon is the new boy in town, but he isn't like everyone else. Celeste feels herself drawn to him in spite of the fact that she has a great life, great friends and very popular boyfriend. Can she keep Brandon's secrets as well as her own? Is he really the one shes been waiting for or is he something entirely different.

I have mixed feelings about this one. Ellen Schreiber creates a great start to a new series. The series has a lot of potential to be very good. But, there a couple of things that didn't appeal to me as a reader. That's not to say that the next person wouldn't love it.

Celeste is a character that has a lot of room to grow. She has a very caring spirit which is shown through her volunteer work at the nursing home yet she tends to be more of a follower than a leader. She seems caught up in what everyone else expects of her instead of what she expects of herself. I just wanted her to be a bit more assertive to let her friends know that she expected them to stand by her no matter what her decisions were. She seemed a bit wishy-washy to me but that only means she has a lot of room to change in the future of the series.

Brandon is a very sexy young werewolf, who I wouldn't change a bit. He is that nice mix of tough, yet sweet. He isn't a softy that's for sure, he commands respect and it's obvious that he is very much in touch with who and what he is. I really liked the heat factor that he added to the book, without going overboard with too much teen angst. I'm glad that Celeste was finally able to make a good decision in the end, but it took her quite a while to get there.

Schreiber gives us a great start with this one. It's a face-paced quick read that sets up the story, the main characters, as well as supporting characters like Abby and Ivy. We learn a little about Legend's Run and it's history but there is so much more to learn in the subsequent novels. I'm excited to see if Celeste will pull it out and become the character she seems like she could be.

Once in a Full Moon is available NOW from your favorite bookseller. 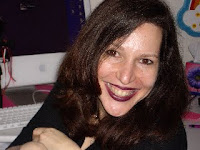 Ellen Schreiber was an actress and a stand-up comedienne before becoming a writer and moving to her own Dullsville. She is the author of Teenage Mermaid, Comedy Girl, and all of the books in the Vampire Kisses series. Vampire Kisses is an ALA Quick Pick for Reluctant Young Adult Readers, a New York Public Library Book for the Teen Age, and an IRA/CBC Young Adults' Choice.
Posted by justpeachy36 at 7:48 PM