(Received for review from the author)

If you live in Morehead, KY or in the surrounding area:

SHANGHAI GIRLS by Lisa See from Expanded Books on Vimeo.

In 1937 Shanghai - the Paris of Asia - twenty-one-year old Pearl Chin and her younger sister, May are having the time of their lives. Both are beautiful, modern, and carefree - until the day their father tells them he has gambled away their wealth and that repay his debts, he must sell the girls as wives to suitors who have traveled from Los Angeles to find Chinese brides. As Japanese bombs fall on their beloved city, Pearl and May set out on the journey of a lifetime, from the Chinese countryside to the shores of America. Though inseparable best friends, the sisters also harbor petty jealousies and rivalries. Along the way they make terrible sacrifices, face impossible choices, and confront a devastating, life-changing secret, but through it all the two heroines of this astounding new novel hold fast to who they are - Shanghai girls.

This is a book that I had been wanting to read for quite some time. I just sort of reminded me of the same type of feeling I got when I wanted to read, Memoirs of a Geisha, and I thought I would enjoy it. I certainly did. Lisa See has a real knack in her writing for bringing the past alive. She also did an excellent job with this in her book, Snow Flower. See makes the scene come off the page and helps the reader to really visualize what her characters are seeing.

Sisters, Pearl and May are modern young women in 1937 Shanghai. They are what we would consider models now-a-days. They made money by posing for artists, for calendars and paintings and other kinds of advertising campaigns. They were basically spoiled girls who were used to getting what they wanted. They lived a rather extravagant life and were shocked when they learn that their father has gambled away their family fortune. He tells them that he has sold them as wives to American suitors in order to pay his debts. The two sisters who are very close are torn apart and forced to into a society that doesn't want to accept them. Their love for each other is the glue that holds them together.

I really enjoyed this novel. It really made the Chinese culture come alive for me. The early part of the book was taking place during a time in Chinese history when China was being invaded by Japan and the scenes are so vivid and realistic that they are easy to see in the mind's eye. When the setting moves to the United States this imagery doesn't end, as the reader is given descriptions of Chinatown in Los Angeles and other areas. See just has a way of helping the reader acquaint themselves with the surroundings of the characters that makes them easier to understand. The reasons behind why did they did certain things.

I was a lot taken aback by the shift in pace of the book when the setting moved from China to the United States. The pace picked up and seemed to move more quickly which was a little disappointing. I had liked the way Lisa See was moving and the change was too abrupt for me. Also the ending wasn't what I expected, but that doesn't change the fact that it's an excellent book that I thought was very well thought out and delivered in a very personal sort of way. The voice of the author was easily discernible and I loved the characters. They were developed with skill and it made me really enjoy reading about them and finding out more and more about them.

I would recommend this one for anyone who is interested in the Chinese culture in China and the U.S, as well as readers who want to read about the bonds of family or the struggles of immigrants. I really enjoyed the book.

Shanghai Girls is available NOW from your favorite bookseller. 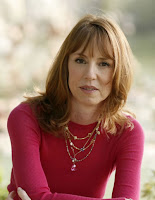 Lisa See may not appear to fit the standard conception of a Chinese-American woman, but her deep roots in her Chinese background have set her on a path leading her to being one of the most significant Asian-American voices in contemporary writing.

Sarah Reads Too Much said...

I am looking forward to this book. I loved Snow Flower, and also Peony in Love, which I read recently. Thanks for the review!