The Stormchasers by Jenna Blum
(For review from Dutton/Penguin)
Synopsis:
Twins are forced to confront a violent secret from their past in Jenna Blum's first novel since her runaway bestseller, Those Who Save Us

How far would you go to protect a sibling-and at what cost to yourself?

In Those Who Save Us, Jenna Blum proved herself a master storyteller with brilliant insight into the spectrum of human emotion. Now, Blum turns her sights to the most intimate and mysterious of family relationships-that between twins-in her powerful and provocative second novel.

As a teenager, Karena Jorge had always been the one to look out for her twin brother Charles, who suffers from bipolar disorder. But as Charles begins to refuse medication and his manic tendencies worsen, Karena finds herself caught between her loyalty to her brother and her fear for his life. Always obsessed with the weather-enraptured by its magical unpredictability that seemed to mirror his own impulses- Charles starts chasing storms, and his behavior grows increasingly erratic . . . until a terrifying storm chase with Karena ends with deadly consequences, tearing the twins apart and changing both of their lives forever.

Two decades later, Karena gets a call from a psychiatric ward in Wichita, Kansas, to come pick up her brother, whom she hasn't seen or spoken to for twenty years. She soon discovers that Charles has lied to the doctors, taken medication that could make him dangerously manic, and disappeared again. Having exhausted every resource to try and track him down, Karena realizes she has only one last chance of finding him: the storms. Wherever the tornadoes are, that's where he'll be. Karena joins a team of professional stormchasers-passionate adventurers who will transform her life and give her a chance at love and redemption- and embarks on an odyssey to find her brother before he reveals the violent secret from their past and does more damage to himself . . . or to someone else.
Thoughts:
At first glance some might think that Jenna Blum's second novel is about Storm chasers who go around the country in the spring looking for the biggest storms to photograph and try to learn from. Although this is the setting for the book, it's about a lot more than a storm. Blum's second novel has two distinct themes, the first is the bond that exists between twins and the other theme deals with the affects of bipolar disorder.
Karena and Charles are twins and they've always had a very deep bond between them. But is the bond forged from their relationship as siblings or from keeping a long time secret that has changed their lives forever. Charles has bipolar disorder and can be erratic and unpredictable while Karena likes control and having everything in order. They find out how far their bond can be stretched and what it might be limited by in this story about twins, siblings and partners in a secret.
I liked the way Karena feels the bond between them and knows that she is probably the only one who can find Charles and save him, because she knows him so well. She is convinced that he will follow the storms, because stormchasing is his long time passion. But, when she starts out to find him with a group of other storm chasers she gets more than she bargains for, from terrifying storms to finding out some things about herself she never knew.
My mother was a twin, but her brother died young. This reminded me of the bond that they shared and delved into what twins may be feeling about each other and their actions. Feelings of responsibility for the actions of the other twin as well as feelings of deep love and affection are important in this novel.
Bipolar disease has gotten a lot of headlines the past few years. Jenna Blum takes the reader into the erratic world of a person who faces Bipolar disorder everyday. I thought this was a very interesting portrayal of the disease and what the person is feeling as well as the people around them.
The Stormchasers is available now from your favorite bookseller!
Great second novel! I'm giving this one 4 out of 5 apples from my book bag!

Here is some more information about Jenna Blum. 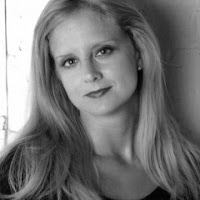 JENNA BLUM is the author of the New York Times bestseller Those Who Save Us(Harcourt, 2004) and The Stormchasers (Dutton, 2010). Jenna is also one of Oprah's Top Thirty Women Writers (http://www.oprah.com/oprahsbookclub/Favorite-Women-Writers). Jenna attended Kenyon College and Boston University, where she taught writing for five years and was the fiction editor for AGNI literary magazine. Currently, Jenna runs master novel workshops for Grub Street Writers in Boston, where she lives. She spends her non-writing time on the road talking to book clubs about Those Who Save Us, which in addition to being a New York Times bestseller was a Boston Globebestseller, the winner of the 2005 Ribalow Prize, a Borders Book Club pick, and a favorite with book clubs across the country (Jenna has visited over 800 book clubs in the Boston area alone). Jenna is very excited for her author tour for The Stormchasers, a novel she researched by chasing tornadoes for five years with the stormchase company Tempest Tours.
Posted by justpeachy36 at 4:50 PM

I have not read this author but thanks for highlighting this book.

Sounds like an excellent story. I'm delighted to find this site.

Lynn
www.writeradvice.com
Author of You Want Me to Do WHAT? Journaling for Caregivers

Great review and the cover is just stunning.