Waking the Witch (Women of the Otherworld series - Book 11) by Kelley Armstrong
(For review from Dutton/Penguin)
Synopsis:

The orphaned daughter of a sorcerer and a half-demon, Savannah is a terrifyingly powerful young witch who has never been able to resist the chance to throw her magical weight around. But at 21 she knows she needs to grow up and prove to her guardians, Paige and Lucas, that she can be a responsible member of their supernatural detective agency. So she jumps at the chance to fly solo, investigating the mysterious deaths of three young women in a nearby factory town as a favour to one of the agency’s associates. At first glance, the murders look garden-variety human, but on closer inspection signs point to otherworldly stakes.

Soon Savannah is in over her head. She’s run off the road and nearly killed, haunted by a mystery stalker, and freaked out when the brother of one of the dead women is murdered when he tries to investigate the crime. To complicate things, something weird is happening to her powers. Pitted against shamans, demons, a voodoo-inflected cult and garden-variety goons, Savannah has to fight to ensure her first case isn’t her last. And she also has to ask for help, perhaps the hardest lesson she’s ever had to learn.

I have decided that I really like, Kelley Armstong. She is almost on par with writers like Charlaine Harris and Patricia Briggs in my book. Her, Women of the Otherworld series got me interested in the Paranormal and the 11th book in the series, Waking the Witch, reminded me of what I love about her writing. I would consider this book, paranormal suspense. It isn't a romance, it's definitely Urban Fantasy and the paranormal elements permeate the whole book. Her style is eclectic and different. It's a breath of fresh air from your typical paranormal tale.

The main character, Savannah is part sorcerer, part demon and all independent! She is headstrong and bull-headed. She wants to do things her own way and prove that she has what it takes to make it as a supernatural detective. But, she bites off a little more than she can chew with this mystery. Three women have disappeared and it's up to her to find out what happened to them. At first the bad guys seem like normal goons, but then signs of the supernatural begin to appear. Savannah is a great character, she's a very kick-butt kind of chick, who can take care of business. I liked that about her, despite the fact that it made some of her decisions seem a bit rushed. Full speed ahead and not turning back.

Armstrong's fans will adore this new addition to the series. It may be a little hard to follow for readers who are jumping in on number 11 without, first reading the other 10, but the mystery alone will make figuring it all out, worth while. Readers will be swept away with all of the supernatural elements in this book. From shaman to stalkers, to occasional cult member, readers will get their dose of the paranormal with this novel.

All eleven novels in the Women of the Otherworld series are available NOW from your favorite bookseller. Including # 11, Waking the Witch.

I liked this one a lot and I'm giving it 5 out of 5 apples from my book bag! 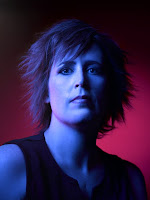 I’ve been telling stories since before I could write. My earliest written efforts were disastrous. If asked for a story about girls and dolls, mine would invariably feature undead girls and evil dolls, much to my teachers’ dismay. All efforts to make me produce “normal” stories failed. Today, I continue to spin tales of ghosts and demons and werewolves, while safely locked away in my basement writing dungeon.

Sounds good though not my normal reading.