Instead of disappearing from Elizabeth Bennet's life after she refused his offer of marriage, Mr. Darcy had stayed and tried to change her mind?

Lizzy, as she gets to know Darcy, finds him undeniably attractive and her impulses win out over her sense of propriety?

Madly in love and mutually on fire, their passion anticipates their wedding?

In To Conquer Mr. Darcy, instead of avoiding Elizabeth after his ill-fated marriage proposal, Mr. Darcy follows her back to Hertfordshire to prove to her he is a changed man and worthy of her love. And little by little, Elizabeth begins to find the man she thought she despised, irresistible...

"Shows a different side of Darcy, a bold side unafraid of going after what he wants."
-Hollywood Today

"Sure to appeal to fans of lusty historical romance."
-Library Journal

"Abigail Reynolds sure knows how to steam up a page!"
-A Readers Respite

"If you always longed for Mr. Darcy to sweep Elizabeth off her feet, then this is your book!"
-I Just Finished Reviews

For anyone who loves, Jane Austen and Pride and Prejudice, this book is a must have. The Pemberley Variations series, takes up the question of What if? If we could change the circumstances just a little, we could see what might have happened if... In To Conquer Mr. Darcy, Abigail Reynolds answers the question What if, Mr. Darcy didn't leave after his failed proposal to Elizabeth? What if he decided to win her heart instead of his pride being injured?

This book is full of romance and love with all of our favorite characters. The head strong and vibrant, Elizabeth Bennett and the honorable, loyal Mr. Darcy. Elizabeth's character is much like she was in Austen's Pride and Prejudice, but in this book we see how things may have been different if she just let go of all of her idea's of propriety and let herself love Mr. Darcy unconditionally. We see Elizabeth as a woman with deep passions which are stirred to life by an irresistible force, in Mr. Darcy. Reynolds makes Elizabeth less proper and easier to identify with. She is still the same headstrong girl but she is helpless against the power of love.

Mr. Darcy is still the same stoic, honorable man, but he is less hampered by his idea's of the aristocracy. He finds himself in love and unable to just idly cast it aside. His love for Elizabeth is so strong that he has to throw out his normal way of doing things and pursue her with great ardor. As in the Pride and Prejudice, he loves Elizabeth but Reynolds allows his to show that love in deeper and more meaningful way. To Conquer Mr. Darcy takes these two characters to a new level of love and passion that will make a true romance fan, swoon!

To Conquer Mr. Darcy is available NOW from your favorite bookseller.

I am giving this one 4 out of 5 apples from my book bag!

Here is some more information about Abigail Reynolds. 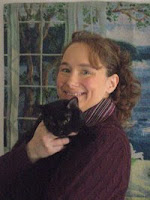 Abigail Reynolds is a lifelong Jane Austen enthusiast and a physician. In addition to writing, she has a part-time private practice and enjoys spending time with her family. Originally from upstate New York, she studied Russian, theater, and marine biology before deciding to attend medical school. She began writingFrom Lambton to Longbourn in 2001 to spend more time with her favorite characters from Pride & Prejudice. Encouragement from fellow Austen fans convinced her to continue asking ‘What if…?’, which led to four other Pemberley Variations and her modern novel, Pemberley by the Sea. Other novels in the series have been written since and have seen great success. She lives in Wisconsin with her husband, two teenaged children, and a menagerie of pets.

I love P&P sequels! I just read about it on another blog with a giveaway as well.

This one sounds really great, loving the reviews of it :)