Review: This Must Be The Place

This Must be the Place by Kate Racculia
(For review from Henry Holt)
Synopsis:
From the back cover: "The Darby-Jones boardinghouse in Ruby Falls, New York, is home to Mona Jones and her daughter, Oneida-two loners and self-declared outcasts who have formed a perfectly insular family unit along with the three eclectic boarders who live in their house. But their small, quiet life is upended when Arthur Rook shows up in the middle of a nervous breakdown, devastated by the death of his wife, carrying a pink shoe box containing all his wife's mementos and keepsakes and holding a postcard from sixteen years ago, addressed to Mona but never sent. Slowly the contents of the box begin to fit together to tell a story-one of a powerful friendship, a lost love, and a secret that, if revealed, could change everything that Mona, Oneida and Arthur know to be true. Or maybe the stories the box tells and the truths it brings to life will teach everyone about love-how deeply it runs, how strong it makes us, and even when all seems lost, how it brings us together."
Thoughts:
This is one of those novels that is part love story, part mystery and a whole lot about friendship and coming of age. This Must be the Place is a story about Arthur Rook. Arthur sets out on a quest to find out many of the things he didn't know about his wife, who died of a freak accident. Arthur ends up in a boardinghouse run by his wife's former best friend Mona. Mona holds the key to finding out everything Arthur wants to know, but she isn't forthcoming with any information. Mona and Amy, Arthur's wife were best friends for 16 years and then something happened. As Arthur begins to unravel the mystery, it may change the lives of not only Arthur, but Mona and her teenage daughter, Oneida as well.
Kate Racculia has done a wonderful job with her debut novel. This Must be the Place is filled with eclectic characters and quirky situations. It is filled with pop culture references. I would definitely consider is "Chick" lit. Women are going to really enjoy this book and it's characters. Mona is a single mom who has always felt that she and her daughter, had enough. That they didn't need anything else to make them happy, but when Arthur Rook shows up with a postcard that Amy never sent, her whole world is turned upside down. Mona's character is strong willed and independent, but we see her grown throughout the novel and become more vulnerable and able to be in touch with her feelings. Many women will identify with her character and look forward to seeing the outcome.
Mona's daughter Oneida has a story all her own. Her budding romance with Eugene keeps her busy. She's a little bit left of center and marches to the beat of her own drum, but that makes her all the more attractive as a character. I really enjoyed her high school antics and it took me back down memory lane to my days as a teenager and what it was like going through some of these same situations.
This Must be the Place is available now from your favorite bookseller.
I really enjoyed this book and I'm giving it 4 out of 5 apples from my book bag.

Here is some more information about Kate Racculia. 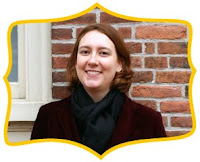 Kate grew up in Syracuse, New York, and attended college at the University of Buffalo, where she studied illustration, design, Jane Austen, and Canada. After a year in Philadelphia as a Barnes & Noble children’s bookseller, she moved to Boston for graduate school and received her MFA from Emerson College. Now she calls Boston home. She likes chowder but not lobster, and has been a bassoonist, a planetarium operator, a coffee jerk, a designer, a proposal writer, and a karaoke god.

She watches more movies than is probably healthy and is most likely reading a book right at this moment. Sometimes she talks not to, but for inanimate objects, and she firmly believes the finest flavor combination on this planet is chocolate and peanut butter.

Kate is, as if you couldn’t tell, kind of a geek.

This Must Be the Place is her first novel. She is working on her second, which will be stupendous.
Posted by justpeachy36 at 4:05 PM

I think it's refresting that Mona is portrayed as a complete character in the beginning because most other books have characters who are wanting right from the get go.