Two Tickets to the Christmas Ball by Donita K. Paul

(Received for review from Waterbrook Multnomah)

Excerpt from Two Tickets to the Christmas Ball
Book Trailer:

Can mysterious matchmaking booksellers bring two lonely hearts together in time for Christmas?

In a sleepy, snow-covered city, Cora Crowder is busy preparing for the holiday season. Searching for a perfect gift, a fortuitous trip to Warner, Werner and Wizbotterdad's ( a most unusual bookshop) leads to an unexpected encounter with co-worker Simon Derrick. And the surprise discovery of a ticket for a truly one-of-a-kind Christmas Ball.

Every year, the matchmaking booksellers of the Sage Street bookshop host an enchanting, old-fashioned Christmas Ball for the romantic matches they've decided to bring together.

This year, will Simon and Cora discover a perfect chemistry in their opposite personalities and shared faith? Or will the matchmakers' best laid plans end up ruining everything this holiday?

Donita K. Paul brings us a holiday novella that will touch the heart and make us believe in fairy tales. Two Tickets to the Christmas Ball is a book that will really get readers in the holiday spirit. It is Christian Fiction with a hint of fantasy. Paul's unique ability to mix Christian wisdom and themes with fantasy and magical elements really makes this book stand out this Christmas season.

When Cora Crowder thinks about Christmas she is a bit confused. Having found a new faith in God, she isn't sure how all the commercialism and Santa Claus stories all mesh together. But, when she unexpectedly encounters a co-worker in a quaint old bookshop in a corner of the city that doesn't seem to be on the map, her vision begins to clear. There is a lot more than meets the eye to "Serious" Simon Derrick as Cora soon learns, when they both receive a ticket to the mysterious Wizards Christmas Ball. Cora soon meets Simon's very special sister, Sandy and the rest of his quirky Christian family and she longs for that peace in her own family life of misfits. Will Cora and Simon see how right they are for each other before the ball approaches? Or will they both go on about their lonely lives?

This one is definitely my favorite Christmas book this year. Donita K. Paul has written a story that not only appeals to my romantic side, but to my sensibilities as a Christian during this time of year. It's more than just gifts and the hustle and bustle of the season. Who spends the most money or has the biggest display of lights. Christmas is about love. The love that God showed when he sent his Son and the love that we share with each other. Paul brings together two lonely people, who have their hearts in the right place, but they just haven't found that special someone to share it with.

Cora's character is very compelling. She had a tough life growing up, but she didn't let that stop her. She went on to become something different. She found the Lord and it changed her life completely, but like everyone else she is still flawed. She isn't perfect and she doesn't try to be. She understands that there are things in her life that she doesn't handle in the best of ways, like her relationship with her mother or her sister Zee. Cora is a great character and I liked reading about her a lot.

Simon, the other main character in the book is the strong silent type. He stepped into a role that he felt he needed to fill when his father passed away, but that has kept him from branching out and finding his true passions or finding someone to spend his life with. It's hard to find a woman who shares your faith in this day and age and harder still to find one who can accept your family. Simon seems like someone who has been hurt in the past and has a hard time opening up, but when he does... it's magic.

I really liked the fantasy and magical elements of the story. It just goes to show you can write good Christian Fiction that isn't the same old cut and dried story. It can be refreshing, and filled with surprises. This book has a real fairy-tale quality about it that really appealed to me. You just knew there would be a "happily-ever-after" at the end of this one. But getting there was a wonderful journey. It's a short and sweet, at just over 200 pages, which is great for this hectic time of year. The characters are compelling and easy to identify with. The supporting cast including Simon's sister Sandy and Cora's sister Zee, add an unexpected strength to the story.

I recommend this one to lover's of Christmas books and fairy tales. It was a really good story, very romantic and whimsical. It's light on the Christian influences and doesn't overpower. This one isn't one you pass up!

Two Tickets to the Christmas Ball is available NOW from your favorite bookseller.

This one gets 5 out of 5 apples from my book bag! Very Christmassy and very romantic! 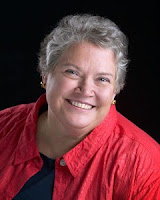 Expertly weaving together fantasy, romance and Biblical truths, Donita K. Paul penned the best-selling, fan-favorite DragonKeeper Chronicles series. After retiring early from teaching, she began a second career as an award-winning author and loves serving as a mentor for new writers of all ages. And when she's not putting pen to paper, Donita makes her home in Colorado Springs and enjoys spending time with her grandsons, cooking, beading, stamping, and knitting.

Thank you so much for the review. I looked at your profile and realized you have a lot on your plate. thank you for taking the time to read the book and comment. Bless you and your child and may the new year bring the achievements you desire.

Thanks so much for stopping by. I truly enjoyed your book!