Review and Giveaway: The Gilded Shroud


Never underestimate the resolve of a lady's companion. She's a woman of incomparable cunning and curiosity, and she is an unfailingly attentive to her duties as she is to the intricacies of murder...


Pity the lady's maid who found the body - with a bruised neck, sprawled across a disheveled four-poster bed - revealing a grim truth: Poor Emily, wife of the Marquis of Polbrook, had been strangled in the night. The last thing Emily's brother-in-law, Lord Francis Fanshawe, expects to find so soon after the crime is an adept investigator already settled comfortably in the Polbrook family circle.


She is Ottilia Draycott, the Dowager Lady Polbrook's young new companion. Ottilia is intelligent, resourceful, and observant, and she's the family's hope for establishing the innocence of the marquis, despite a motive - he had wished Emily gone. But as Ottilia pieces together a picture of Emily's death, complications arise: The marquis has gone missing and there has been a theft of a priceless heirloom. Now Ottilia finds herself in a house of strangers, and every one of them is a suspect. And only she can unmask and outwit a killer desperate enough to replay the murderous events of that fateful night to keep a family secret buried.

Author Elizabeth Bailey brings readers a cozy mystery set in Georgian England of the late 1700s, in her latest book, The Gilded Shroud. This is the first book in a new series featuring ladies maid and amateur sleuth, Ottilia Draycroft. Readers will love Bailey's period detail and strong characterization. She gives readers a nice blend of romance and mystery that will keep those pages turning long into the night. Full of danger and intrigue this is a historical cozy that fans of the genre will not want to miss.

Ottilia Draycott is the temporary companion to the Marchioness of Polbrook. But when the Dowager's daughter-in-law, Emily turns up dead, she puts her sleuthing skills to the test as she tries to find the killer. The Marquis, Emily's husband is missing and is the most logical suspect. But Tillie doesn't think Randall had anything to do with the crime. With the help of the Dowager's other son, Francis and her own ingenuity, Ottilia is on the case! Could it be a spurned lover? Perhaps it has something to do with a family heirloom that has also been stolen? As the whodunit heats up so does the level of attraction between Tillie and Francis. But is there a permanent place for her in this household? Maybe... if she can prove the Marquis innocent.

Elizabeth Bailey has created a new cozy mystery series, set in Georgian England. I liked the fact that she took the cozy sub-genre to a place that we don't often expect. Most cozies involve a hero/heroine who has a day job, but does some amateur sleuthing on the side. Cozies generally also have a small town setting and deal with murder and mayhem with a little bit of a lighter touch than do thrillers and mainstream mysteries. In The Gilded Shroud, Bailey adjusts the model a to suit her story. She gives readers a female heroine in Ottilia Draycott, who is the companion the Dowager Polbrook. But that's where the similarities end. This book is set in England, notably London, a much larger setting than most cozies. The novel also has a historical romance feel to it, that readers will love.

Bailey instills her book with rich period details and historical references. By telling the reader about the dress and customs of the day. She makes reference to the political climate and things going on within the government, which helps the reader to ground themselves in this time period. I thought the author was really able to make the scene and her characters come alive. Readers will enjoy feeling like they understand the times in which these people lived and what their daily lives may have been like.

They mystery aspect of the book was well written and fast paced. The author doesn't spend a lot of time creating drama or hiding the clues in this one, so her writing really has to stand on it's own. The mystery is very straight forward and Ottilia doesn't have to muddle through or search very hard to find out what's going on. However, that also means that it is relatively easy to figure out the outcome. When I read cozies I enjoy trying to figure out the clues right along with the heroine and I always try to make a prediction before the end and see if I'm right. This book is very relaxing and easy to follow and even though I had it figured out long before the end of the book, I still found the reading of it very enjoyable.

I'm looking forward to reading more about the interesting characters that Bailey has created. Tillie is very engaging character and certainly a bit unconventional for her time. Francis is loyal and very dapper. He just has a way about him that is alluring. The romance between the two of them is very clean and romantic, but it still has a hint of passion that historical romance fans will love and a great mystery that cozy fans will fall for. I recommend this one to cozy mystery readers and historical romance enthusiasts that like their love stories with a murder or two thrown in.


The Gilded Shroud is available NOW from your favorite book seller. 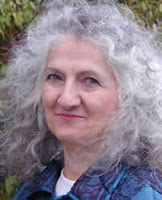 An avid reader from an early age, Elizabeth Bailey grew up in colonial Africa under unconventional parentage and with theatre in the blood. Back in England, she trod the boards until discovering her true metier as a writer, when she fulfilled an early addiction to Heyer by launching into historical romance with Harlequin Mills & Boon, and fueling her writing with a secondary career teaching and directing drama.

Now retired from teaching, and with eighteen romances published, she has switched to crime. Elizabeth still directs plays for a local group where she lives in West Sussex, England. She also finds time to assess novels and run a blog with tips to help new writers improve.

The publisher is offering one copy of The Gilded Shroud by Elizabeth Bailey to one lucky winner from Debbie's Book Bag!


~ You must be a Google Friend Connect follower to participate.
~ US Addresses only! (Publisher Request)
~ The deadline to enter this giveaway is Midnight EST September 28th.

You are a new to me author, which I love finding. The book sounds really great. I love cozies!

i love coming across a new author/cozy mystery!!! i can't wait to read this!!!! thank you for the giveaway!!!!

This sounds like a novel that would appeal to me on many levels, mystery, romance and historical.
theresa n
weceno(at)yahoo(dot)com

Thanks for the giveaway. I can't wait to read your book. It sounds very good. Tore923@aol.com

Hi Elizabeth! I can't wait to read your book, it sounds like a good one. I love the name Ottilia, my sister-in-law was the only one I ever knew with that name.
mamabunny13 at gmail dot com

Love stories set in historic England and his looks like good one.

Most cozy's seem to be set in the present---this one should be a pleasant change of pace being set in old time England.
Thanks for the giveaway.
farrell@crosslake.net

I'm always happy to find new authors (to me) in the field of cozy mysteries! This one definitely sounds like a keeper:)
jwitt33 at live dot com

This would be a great read for me. I enjoy historical set old time mysteries. Thanks for the giveaway

Thank you for the giveaway. It sounds like a great read!

I like a nice blend of romance and mystery.

I love the idea of period detail and a very fast paced mystery!

This sounds wonderful! I would love to read it and I follow on gfc.
misusedinnocence@aol.com

This sounds like a book I would enjoy! I don't think I've ever read a historical cozy and I love the cover! Thanks for the giveaway!
mittens0831 at aol dot com

I'm intrigued by this review - set in Georgian times, a mystery, a romance & a new series - I'd love to try it!