Review: Lady of the English

Lady of the English by Elizabeth Chadwick

Excerpt from Lady of the English
Book Trailer:


Synopsis:
One Queen. One Empress. One Country
Matilda, daughter of Henry I, knows that there are those who will not accept her as England's queen when her father dies. But the men who support her rival Stephen do not know the iron will that drives her.

Adeliza, Henry's widowed queen and Matilda's stepmother, is now married to a warrior who fights to keep Matilda off the throne. But Adeliza, born with a strength that can sustain her through heartrending pain, knows that the crown belongs to a woman this time.

In the anarchy, in a world where a man's word is law, how can Adeliza obey her husband while supporting Matilda? How long can Matilda fight for the throne that she has struggled so bitterly to win?

Highly acclaimed historical fiction novelist, Elizabeth Chadwick brings readers the tale to two women, bound by friendship, but separated by political loyalties. Lady of the English follows the story of Matlida, Henry I's only legitimate heir, after the death of his son and Adeliza, Henry's second wife. Chadwick's ability to bring medieval England to life is unparalleled in historical fiction circles. She brings the 12th century into stark reality in this book, about the engrossing saga of war and hatred that nearly tore England apart.

King Henry I had two very important women in his life and on his death he tried desperately to see that they were both safe and provided for. Adeliza, Henry's second wife was unable to bear him an heir, and he names his daughter, Matilda as his successor. But Matilda is a woman and at this time in history many of the nobleman do not want to be ruled by a woman. Matilda's cousin Stephen is waiting in the wings, ready to usurp the throne once Henry is dead. But he underestimates the resolve and determination of Matilda, who plunges England in to Civil War. Adeliza and Matilda are good friends and though she loves Matilda and believes she is destined to be Queen, her new husband fights to keep Stephen in power. Will their friendship be able to stand against the maelstrom of hatred and war?

As many of you know I am a huge fan of historical fiction and I'll have to say that Elizabeth Chadwick is one of my favorite historical fiction authors. There is just something about her writing style that appeals to me. She takes complicated historical drama and makes it accessible to the reader. I don't know about you, but even as a former history major, I still sometimes have trouble keeping all of the English Kings and personages straight in my head. One of the things that strikes me so much about Chadwick's works is that they are easy to understand and follow. Though the may center around a complex series of events, they bring clarity to the period and its historical significance. Lady of the English is no exception to the rule. Chadwick brings the struggle between Stephen and Matilda into such clear focus that the reader will easily be able to place it in history when reading other novels about the period. Quite a feat!

Lady of the English is essentially the story of two very different women who's friendship is tested beyond belief in a power struggle that divided a country. Chadwick's portrayal of both Matilda and Adeliza is compelling and heartbreaking in some respects. Matilda comes home after her husband the emperor dies, to meet her father's new wife, Adeliza who is close to her age and willing to be a loving stepmother. The two women strike up a fast friendship that becomes a life long bond. When Henry dies it is obvious to both women that they will be separated. I loved the way that Chadwick allows the reader to see the deep feelings that these women have for each other. And even though they are not on the same side in most of this novel, they still believe in each other.

Matilda is known throughout history as relentless and determined. She brooks no interference to her goals and stands out as a very strong woman in her time. One of the things I think Chadwick is able to do with Matilda's character, is to show her more as woman, than a figurehead. We learn in history what links Matilda goes to to try to win back the crown, but we don't often see her as a doting mother or as a loving stepdaughter. Chadwick is able to show Matilda's personality and who she may have been internally. With Adeliza, Chadwick brings readers the story of a woman torn between loyalty to her new husband and love for her former stepdaughter. Adeliza is portrayed as loyal and loving. Her honor to her country and to God being so important in her life that she struggles with her feelings that Matilda should rule England. Chadwick brings both women to life in this book and makes their story resonate with readers from many backgrounds.
I liked the fact that Chadwick stays true to history and does not add or take away from what became known as one of England's most bloody periods. The anarchy was vividly described in this novel and leaves little to the imagination. This was a difficult time in England's history and I was impressed that the author was able to make the story of friendship kind of supersede it's circumstances. The relationship between these two women takes center stage here and I think readers will love that about this book. I recommend this one to readers of historical fiction and those who love stories about women's relationships. This novel isn't short at over 500 pages and is a little hard to follow as to where one is in history, but the chapter titles help and I think readers will really be able to delve into this book and enjoy what Chadwick brings to the table.

Lady of the English is available NOW from your favorite bookseller. 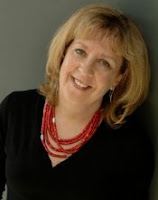 Elizabeth Chadwick lives in Nottingham with her husband and two sons. Much of her research is carried out as a member of Regia Anglorum, an early medieval reenactment society with the emphasis on accurately re-creating the past. she also tutors in the skill of writing historical and romantic fiction. Her first novel, The Wild Hunt won a Betty Trask award. She was shortlisted for the Romantic Novelist's Award in 1998 for The Champion, in 2001 for Lord of the White Castle, in 2002 for The Winter Mantle, and in 2003 for The Falcons of Montabard. Her sixteenth novel, The Scarlet Lion, was nominated by Richard Lee, the founder of the Historical Novel Society, as one of the top ten historical novels of the last decade.
Posted by justpeachy36 at 1:54 PM

Thanks for the great review- I am really looking forward to reading this!

i can't wait to read this one!

Great review.
I am lucky enough to have copy of this on my TBR shelves.

Looking forward to it

I am a big fan of Elizabeth Chadwick's medieval historical fiction! Can't wait for her next books!