A Heart Revealed (Wind's of Change - Book 2) by Julie Lessman


Excerpt from A Heart Revealed (Courtesy of Seasons of Humility)


Her heart is tied to a youthful vow... but can true love set it free?


Ten years ago, Emma Malloy fled Dublin for Boston, running for her life. Her emotional wounds have finally faded, and her life is now full of purpose and free from the pain of her past. But when she falls for her friend Charity's handsome and charming brother, Sean O'Connor, fear and shame threaten to destroy her. Could Sean and Emma ever have a future together? Or is Emma doomed to live out the rest of her life denying the only true love she's ever known?


Filled with intense passion and longing, deception and revelation, A Heart Revealed will hold you in its grip until the very last page.


A Heart Revealed is the second book in Julie Lessman's Winds of Change series, but it also ties loosely to her Daughters of Boston series as well. Both sets of books follow the adventures of the Irish O'Connor family. In her latest book, Lessman takes up the story of Sean one of the eldest sons of the O'Connor family and Emma Malloy, a young woman the O'Connor's have taken under their wing. Emma fled Ireland and came to Boston leaving behind an abusive husband, and a life that she could no longer bear, but she still feels she is bearing the punishment of her sins by still being tied to her husband and believes herself unworthy of love. With the help of Sean, his family and most of all God, Emma is able to find herself and open her heart to the possibilities of forgiveness and ultimately love.


A Heart Revealed can stand on it's own and be read a part from the other books by Lessman, but I believe the reader is really missing out by not reading everything they can find about the O'Connor family. There are so many characters and so many people interacting with each other, I just think it could be a little confusing without all the back story. This book reads like a Christian soap opera, which is amusing in a lot of ways. There are several couples in varying stages of friendship, first love and marriage and keeping them all straight may prove a hard task for some readers, but Lessman has a knack for building relationships that are interesting and memorable. Her characters are never put in just to take up space, they always have some purpose or something to teach the reader and I really like that about her writing style.


Lessman has a very clear goal with each of her books. She intends not only to tell a very well thought out story, but she wants the reader to take something away with them after reading one of her novels. In this particular book, I think the theme is learning that even though God forgives us for the things we do that are against His will, we still have to forgive ourselves. Lessman is able to convey that to the reader through Emma's character. Emma is woman who loves God and understands her place in this world. Her outpouring of love is inspiring and very heartfelt, yet the sins of her past still prevent her from having a happy and joyful present. She has asked God's forgiveness, but she is reluctant to forgive herself, thinking she is paying for her misdeeds. I thought Lessman did a fantastic job of expressing this idea and allowing the reader to see what Emma was going through and how she eventually opened her heart to seeing herself as God saw her, not as she saw herself.


I would have to say that this one is probably my favorite book by Lessman so far. I thought she was able to bring a lot of stories from her other books into to play in this one, but not to the point of overwhelming the story she was trying to tell. Though many others are mentioned this book is ultimately Sean and Emma's story and as main characters I think they really shined. Sean is the epitome of the ultimate bachelor and really adds a lot of comic relief to the book as he tries to fend off the wayward advances of other women. But Sean feelings for Emma have grown over time. It wasn't love at first sight and I think he was rather surprised when he realized it, but once he understands, he is like a homing pigeon, Emma is his home, the person he needs in his life and he doesn't give up. I'm glad that the author shows his tenacity and his joyful spirit. Both he and Emma are wonderful characters.


I recommend this book to Christian and Inspirational fiction readers, those who love a good story about family and to those who struggle with forgiving themselves for things that have happened in their past. I loved it and I can't wait for the next one to come out. Lessman is fast becoming one of my favorite Christian authors and I think she'll be one of yours too!

Available September 2011 at your favorite bookseller from Revell, a division of Baker Publishing Group.


I'm giving this one 5 out of 5 apples! Christian historical fiction at it's best! 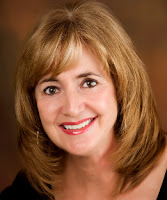 Julie Lessman is the popular author of A Passion Most Pure, A Passion Redeemed and A Passion Denied, as well as A Hope Undaunted, which was one of 2010's Booklist Top Ten Inspirational Fiction winners. Lessman has garnered several writing awards, including ten Romance Writers of America awards. she lives in Missouri.
Posted by justpeachy36 at 9:00 AM

Hey, Debbie, thank you SO much for the great review -- MUCH appreciated!!

I don't know if you are prone to posting your reviews, but if you are, I am running a newsletter contest where anyone who posts a review on Amazon.com, CBD.com, Goodreads, B&N or anywhere else, gets a point for every review posted. Then even just one review posted enters you into a drawing for a signed copy of Steven's story, A Trust Restored when it comes out next year. The persons who come in first and second in posting the most reviews will get a character named after them in Steven's story and the top winner will also get a $50 gift card. So if that sounds like something you'd be interested in, just sign up for my newsletter on my website and post this review wherever and let me know by forwarding me the links. BUT ... if posting reviews is NOT your thing, PLEASE do not worry about it, okay? This is only for those people so inclined.

Thanks again, not only for taking the time to read my book, but to write such a detailed review.