(Received for an honest review from Pump Up Your Book Promotions)


Excerpt from The Queen's Gamble (Courtesy of Romconinc.com)

Young Queen Elizabeth I's path to the throne has been a perilous one, and already she faces a dangerous crisis. French troops have landed in Scotland to quell a rebel Protestant army, and Elizabeth fears once they are entrenched on the border, they will invade England.

Isabel Thornleigh has returned to London from the New World with her Spanish husband, Carlos Valverde, and their young son. Ever the queen's loyal servant, Isabel is recruited to smuggle money to the Scottish rebels. Yet Elizabeth's trust only goes so far—Isabel's son will be the queen's pampered hostage until she completes her mission. Matters grow worse when Isabel's husband is engaged as military advisor to the French, putting the couple on opposite sides in a deadly cold war.

Set against a lush, vibrant backdrop peopled with unforgettable characters and historical figures, The Queen's Gamble is a story of courage, greed, passion, and the high price of loyalty. . .

Barbara Kyle's fourth book in the Thornleigh series, The Queen's Gamble, finds Isabel Thornleigh married to a Spanish soldier, living in Peru with her son. When she hears that her mother is accused of murder, Isabel and her family return to England to find that young queen Elizabeth is already at odds with the Scots, who are being aided by the French. In an attempt to show her loyalty to the crown, Isabel agrees to a mission involving smuggling money to the Scottish rebels. When she goes uncover to find out the details of a plot to kill Elizabeth she is risking her son, her marriage and her life. Taken for a traitor Isabel must fight for innocence and the life of her queen.


Kyle easily blends historical fiction and mystery in her latest Thornleigh book. The Queen's Gamble, although fourth in a series, can be easily read as a stand alone, but readers may benefit from reading the other books just to find out more about this very interesting family that Kyle has created. The Thornleigh's are loyal subjects to the crown and characters that resonate with readers of both genres.

Isabel is a strong independent woman who takes her commitments seriously. In this novel she is not only fighting to save her son, whom Elizabeth has taken for a surety that she will complete her mission, but also fighting for her marriage. On opposite sides of the conflict she and Carlos are facing the ultimate test of their love. Kyle is able to draw the reader into the story by providing characters that are fully fleshed out and interesting. Queen Elizabeth actually takes a back seat to Isabel in this novel. The amount of character detail and personality is amazing.


Kyle is an author known for her attention to the little things. Her rich period detail and descriptions transport readers back to Tudor England in a heartbeat. Everything from the clothing to the cultural references appear authentic and very believable. The reader will appreciate the amount of research necessary to pull this off. Kyle is obviously a student of her time period and is able to convey the overall atmosphere of the times. The early years of Elizabeth's reign was fraught with danger and political intrigue and Kyle brings Elizabeth's court into stark detail.


Being of Scottish ancestry it is always interesting to me how an author treats the political uprisings and situations between Scotland and England. Kyle is able to show readers the plight of the Scottish people, without over dramatizing or showing favoritism to one side or the other. She uses the details of this long standing conflict to enhance the story, but not overwhelm it. I liked the fact that she stayed true to her story line and did not waver in her execution.

Though the book started out a little slow for me, once it picked up speed I had a hard time setting it aside. The mystery aspect of the story was very intriguing and I found myself wondering how Kyle was going to pull out the ending. It was a very satisfying read for me, a former history major and for me as an avid mystery reader. The combination of both genre's meshed well and will certainly find and audience in both areas. At close to 450 pages the reader may think it a little long, but it is definitely worth the time. I recommend this one to mystery fans and historical fiction enthusiasts. With great period details and engaging characters this one isn't one readers will want to miss!

The Queen's Gamble is available NOW from your favorite bookseller. 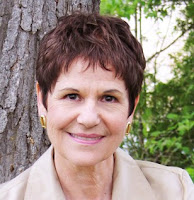 Barbara Kyle in her own words:

How do you make God laugh? Make a plan. I studied acting in the classical theatre program (Shakespeare, Shaw, Moliere, etc.) at the National Theatre School of Canada in Montreal, planning a "distinguished stage career" - then spent the next twenty years acting mostly on television in made-for-TV movies, sit-coms, and soap opera. I thoroughly enjoyed all that TV work, though, and I did use my stage training too, performing in dozens of plays across Canada and in the US. I loved being an actor.

It felt like a natural extension of my acting to create characters for fiction, and in 2008 Kensington Books published my first historical novel, "The Queen's Lady". Set in the court of Henry VIII, "The Queen's Lady" features Honor Larke, a (fictional) ward of (the real) Sir Thomas More. More was a brilliant scholar and a loving father, but as chancellor of England he banned books and burned men. My story turns on Honor's passionate conflict with her once-beloved guardian as she tries to save More's victims, enlisting rogue ship-captain Richard Thornleigh in her missions.

Readers found these characters so engaging, I wrote a sequel, "The King's Daughter," (2009) featuring Honor and Richard's daughter, Isabel. When Henry VIII's bitter daughter, Queen Mary, launches her reign with a vow to annihilate heretics, Isabel Thornleigh must act quickly to save her family. Determined to rescue her father from prison, she entrusts her mission, and herself, to a ruthless soldier of fortune, Carlos Valverde.

The third book in this "Thornleigh" series is "The Queen's Captive" (2010). When Queen Mary releases her 20-year-old sister Princess Elizabeth from the Tower, hoping she'll make a false move and condemn herself, Honor Thornleigh returns from exile with Richard and their seafaring son, Adam, to help Elizabeth in the fight of her life. Playing a dangerous game as a double agent, aware that a false move of her own will expose her past as a condemned heretic, Honor finds her task made harder when Adam and Elizabeth fall in love. To save her family and Elizabeth, and herself, Honor must turn a headstrong princess into a queen before "Bloody Mary" destroys them all.

Newest in the "Thornleigh Saga" is book 4: "The Queen's Gamble" (2011). Isabel, the Thornleighs' daughter, returns to London from the New World with her Spanish husband Carlos Valverde and their young son, and is swept up in the first international crisis of the young Queen's Elizabeth reign: the French, who control Scotland, have landed troops along England's border, threatening an invasion. The Queen recruits Isabel to take money secretly to aid the Scottish rebel faction trying to drive out the French. But when Carlos is sent to Scotland as a Spanish military advisor to the French troops, he and Isabel find they are on opposite sides in this deadly war - and the Queen has made their little boy her hostage.

I love writing about the Tudor period, whose "on the make" characters and life-and-death intrigues - to say nothing of the era's religious paranoia - speak deeply to our own time. I hope you'll agree, and will enjoy being caught up in the passions and setbacks, adventures and strivings of the Thornleigh family - Honor, Richard, Isabel, and Adam - as they befriend, and sometimes betray, their willful kings and queens.

I'm also very excited at the release of my new contemporary novel, "Entrapped," as an e-book. "Entrapped" is a thriller of high stakes: life and death, love, and oil. Set in Alberta, it's the story of Liv Gardner, an ambitious young oil executive intent on stopping farmer Tom Wainwright who is sabotaging her rigs after a spill of lethal "sour" gas poisoned his wife. Desperate to save the company she built, Liv plants evidence to frame Tom. But when the evidence is used to indict him for a murder he didn't commit, Liv alone can save him.

Thanks for taking the time to find out about my books. I do hope you'll enjoy reading them!
Posted by justpeachy36 at 8:00 AM

Thanks for the superb review of Barbara's latest. I'm glad you enjoyed it.

I don't get a chance to read all my clients' books, but I did read this one. I agree that the attention to detail is excellent. I also like that the fictional characters are more prominent than the historical figures.

I hope your readers check this one out.

Have a great weekend.

This looks like a great book, I think I'll have to check out the first one! Thanks for the intro to a new-to-me author and series!