(Received during a giveaway on the author's website, in exchange for an honest review)

Old habits die hard for assassins.
And I plan on murdering someone before the night is through.

Killing used to be my regular gig, after all. Gin Blanco, aka the Spider, assassin-for-hire. And I was very, very good at it. Now, I’m ready to make the one hit that truly matters: Mab Monroe, the dangerous Fire elemental who murdered my family when I was thirteen. Oh, I don’t think the mission will be easy, but turns out it’s a bit more problematic than expected. The bitch knows I’m coming for her. So now I’m up against the army of lethal bounty hunters Mab hired to track me down. She also put a price on my baby sister’s head. Keeping Bria safe is my first priority. Taking Mab out is a close second. Good thing I’ve got my powerful Ice and Stone magic—and my irresistible lover, Owen Grayson—to watch my back. This battle has been years in the making, and there’s a good chance I won’t survive. But if I’m going down, then Mab’s coming with me . . . no matter what I have to do to make that happen.

If you are a fan of Urban Fantasy it's safe to say you've probably heard of the Elemental Assassins series by Jennifer Estep. If you haven't had the pleasure than let me assure you, it's one of the best Urban Fantasy series' out there. I read a lot of books from this genre and I was really excited when I won an ARC copy of the latest book in the series, Spider's Revenge from the author. Jam packed with action and full of well fleshed out characters this book shot straight to my top ten of the year, right out of the gate.

This is such an interesting sub-genre to me. There are so many possibilities. I love strong female characters and gritty, dark environs and this series has both. Estep has crafted an edgy, abrasive world where her characters encounter corruption and magic on a daily basis. Her ability to endear the readers to characters who are capable of some very heinous acts is remarkable. Estep makes the reader want to feel what her characters are feeling and her descriptive prowess is unmatched in the genre.


Estep's latest addition to the series, Spider's Revenge is the culmination of a story arc that began in book one of the series, Spider's Bite. Gin Blanco isn't exactly what readers expect from a heroine. The one thing that has basically shaped her life since she was orphaned at thirteen has been vengeance. Gin has lived for the day when she has a chance to take down Mab Monroe, the fire elemental that killed her family. Now she stands at the edge of fulfilling her need for revenge, but things have changed. Gin is very hard character. She has a take no prisoners attitude. She knows who she is and what she is capable of and she accepts that about herself, but that doesn't mean she is without emotion or conscience. Estep has given the reader a character that is able to garner respect and even sympathy despite the fact she is for all intents and purposes a killer. That takes some talent and Estep pulls it off with ease.


This series and especially this book, is very character driven. Gin may have the leading role in Spider's Revenge, but it the secondary cast of characters who help to create the tension and emotion that is necessary to give the reader the overall experience. In this book we get to see how much each of these characters has come to mean to Gin and how they have shaped her world. Owen, her lover is such a contrast to Gin. He supports and loves her even though he knows what she's done in her past and what she plans to do. Finn is Gin's handler and more importantly he is her friend. He matters to Gin an that's saying a lot. She is very devoted to those she loves and would risk everything for them including the one remaining sister she still has, Bria. These are just a few of the other characters that make up this series. There are so many more interesting characters I could mention, but it's safe to say that Estep really knows how to characterize and bring the people in her mind to life in the pages of her books.


I think readers who have read the whole series so far will really love the way Estep brings it all together in this book. A lot of questions are answered and new ones are brought up. Though is may be the end of this particular story arc, the series itself will continue in February of 2012, with By a Thread, the sixth book in the Elemental Assassins series. I can't say enough good things about this book and this series. If you haven't had the opportunity to read it... GET IT! It's action packed, emotionally charged, full of fantastic characters and situations that will pull you in and never let go til the end. I recommend it to readers of Urban Fantasy and especially to readers who want to give this sub-genre a try. If this is your first taste of Urban Fantasy you'll be hooked!

Spider's Revenge is available NOW from your favorite bookseller.


I'm giving this one 5 out of 5 apples from my book bag! Easily one of my favorites of the year! 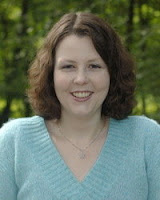 JENNIFER ESTEP is a USA Today bestselling author, prowling the streets of her imagination in search of her next fantasy idea. Spider’s Bite, Web of Lies, Venom, Tangled Threads, and Spider’s Revenge are the other books in her red-hot Elemental Assassin urban fantasy series for Pocket Books. Jennifer also writes the Mythos Academy young adult urban fantasy series, which includes Touch of Frost and Kiss of Frost. She’s also the author of the Bigtime paranormal romance series, featuring Karma Girl, Hot Mama, and Jinx.
Posted by justpeachy36 at 1:11 PM